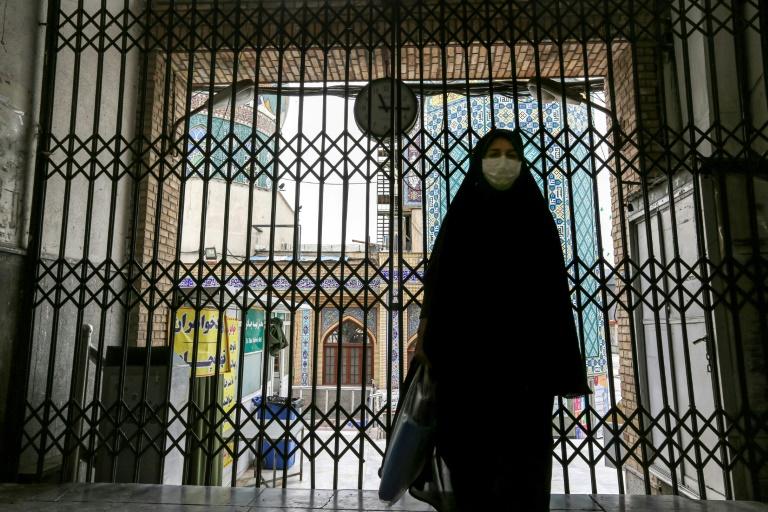 A woman walks past the closed gate of the Imamzadeh Saleh mosque in the Iranian capital Tehran on April 25. On Monday Iran reopened some places of worship in parts of the country deemed at low risk from the coronavirus (AFP Photo/ATTA KENARE)

Iran on Monday reopened mosques in parts of the country deemed at low risk from the novel coronavirus as it announced another 74 deaths from the disease.

Health ministry spokesman Kianoush Jahanpour said the new fatalities brought to 6,277 the total number officially recorded in Iran since it reported its first cases in mid-February.

That was a jump in deaths compared with 47 on Sunday, which was the lowest daily count that Iran has recorded in 55 days.

Mosques were allowed to reopen to worshippers in 132, or around a third, of Iran’s administrative divisions which are considered low-risk.

The country has started using a colour-coded system of “white”, “yellow” and “red” for different areas to classify the virus risk.

Worshippers have to enter mosques with masks and gloves, can only stay for half an hour during prayer times and must use their personal items, said the health ministry.

Mosques must also refrain from offering food and drinks, offer hand sanitisers and disinfect all surfaces, it said in a statement published by ISNA news agency.

According to Jahanpour, 79,397 of those hospitalised with the disease since Iran reported its first cases in mid-February have been discharged, while 2,676 are in critical condition.

He declared that Iran was among “top five countries in the world” with the highest number of recoveries, without elaborating.

Experts and officials both in Iran and abroad have cast doubts over the country’s COVID-19 figures, saying the real number of cases could be much higher than reported.

Masks handed out to commuters as Spain takes steps towards reopening