Iran quake kills at least one, sparks panic in capital

The Times of Earth, International Edition
0
674 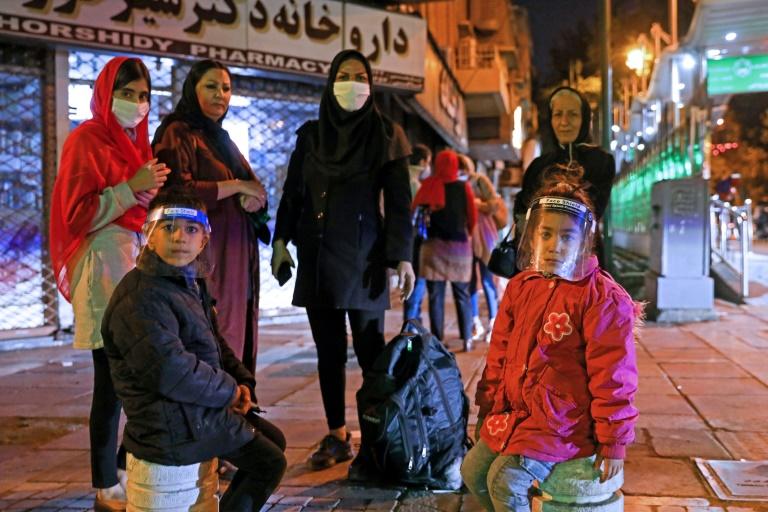 An Iranian family seeks safety on the streets of Tehran after a 4.6 magnitude quake rocks a city already struggling with the Middle East's deadliest coronavirus outbreak (AFP Photo/Amir KHOLOUSI)

An earthquake struck early Friday near Iran’s highest peak and jolted Tehran, killing at least one person and injuring more than 20 as people ran for their lives.

It saw scores of residents of Tehran flee buildings for the safety of the capital’s streets and parks, AFP journalists reported.

Many spent the rest of the night sleeping in their cars on the side of the road, apparently too fearful to return to their homes.

Some wore face masks, a sign of the times in a country already struggling to contain the Middle East’s deadliest outbreak of the coronavirus pandemic.

The temblor struck as Iranians were either sleeping or resting after iftar, the meal breaking the daytime fast observed by Muslims during the holy month of Ramadan.

“We were sitting down when the earthquake struck,” said 45-year-old Tehran resident Ahmad.

“We felt it completely shaking (the building), and then we all went out of the house together to be outside and not to be in danger if an aftershock struck,”

His wife Maryam, who like him was wrapped in a blanket, said they escaped the apartment using the stairwell.

“We quickly took the children by their hands and got out,” said the 37-year-old housewife.

Health ministry spokesman Kianoush Jahanpour said on Twitter that the tremor claimed the life of one person.

He called on people to “keep calm” and to follow safety guidelines.

Iran’s national emergency services said the person who died was a 60-year-old man in Damavand county.

Twenty-three people were injured in Tehran and Alborz provinces, a spokesman for the organisation told AFP.

The Iranian Red Crescent said its staff were on standby but that so far there were no reports of any collapsed buildings in which to carry out search and rescue operations.

“The situation is now stable, but we are still completely on alert” in the provinces of Tehran, Alborz, Mazandaran, Qom and Semnan, said Hamed Sajjadi, head of the organisation’s rescue operations.

“We were ready to accommodate people in stadiums with respect to social distancing, but it was not necessary,” he said, referring to health guidelines aimed at stemming the spread of the coronavirus.

The USGS said the quake struck at a depth of 10 kilometres. Its epicentre was south of Mount Damavand, a largely inactive volcano which at 5,671 metres (18,606 feet) is Iran’s highest peak.

Tehran University’s Seismological Centre said the quake had a magnitude of 5.1 magnitude and was at a depth of seven kilometres.

It reported a series of aftershocks, the most powerful measuring 4.0.

A 5.7 magnitude earthquake that rattled the western village of Habash-e Olya on February 23 killed at least nine people over the border in neighbouring Turkey.

In November 2017, a 7.3-magnitude quake in Iran’s western province of Kermanshah killed 620 people.

In 2003, a 6.6-magnitude quake in southeastern Iran levelled the ancient mud-brick city of Bam and killed at least 31,000 people.

Iran’s Gulf Arab neighbours have raised concerns about the reliability of the country’s sole nuclear power facility, and the risk of radioactive leaks in case of a major earthquake.

Beaches open in Barcelona as Spain decides on next steps of lockdown ...