The Times of Earth, International Edition
0
624 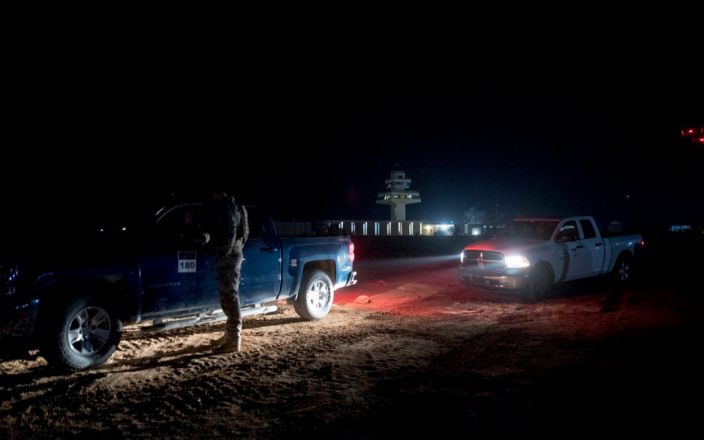 Iran fired missiles Wednesday at Iraqi bases housing the US military, officials in Washington and Tehran said, in the first act of the Islamic republic’s promised revenge for the US killing of a top Iranian general.

Launched from Iranian territory and by Iranian forces not a proxy, the attack marked a new turn in the intensifying confrontation between the United States and Iran and sent world oil prices soaring.

There was no immediate suggestion of any link to the missile strikes but a Ukrainian airliner crashed shortly after takeoff from Tehran early Wednesday with the loss of at least 170 people on board.

The Pentagon said it was still “working on initial battle damage assessments” after “Iran launched more than a dozen ballistic missiles against US military and coalition forces in Iraq”.-

“It is clear that these missiles were launched from Iran and targeted at least two Iraqi military bases hosting US military and coalition personnel” at Ain al-Asad and Arbil, the Pentagon said.

There were no immediate reports on casualties. The Pentagon said the facilities had been on “high alert” after days of steadily mounting tension and exchanges of threats of war.

The Iraqi military said it sustained no casualties in 22 missile strikes on bases housing US troops.

“There were no victims among the Iraqi forces.”

– Base visited by Trump –

Trump, who visited al-Asad with First Lady Melania Trump in December 2018, his first trip to US troops deployed in a war zone, said initial casualty assessments indicated “all is well.”

He tweeted that “assessment of casualties & damages taking place now. So far, so good!”

The Iranian Revolutionary Guards Corps announced that the Ain al-Asad base was hit with dozens of missiles, in response to Friday’s killing in a US drone strike of Iranian general Qasem Soleimani, one of the most important figures in the country’s government.

It warned any US counter-attack would be met with an even “more crushing response” and threatening to strike Israel and America’s “allied governments.”

“We advise the American people to recall US troops (deployed in the) region in order to avoid further losses and not to allow the lives of its soldiers to be further threatened by the ever-growing hatred of the regime,” the IGRC said in a statement.

But Iran’s Foreign Minister Mohammad Javad Zarif seemed to indicate that the missile strikes were over for now.

“Iran took and concluded proportionate measures in self-defence” targeting a base from which a “cowardly armed attack against our citizens and senior officials” was launched, he said on Twitter.

The brazenness of the strike was highly unusual for Iran, which has tended to disguise attacks on US interests or troops through the use of proxy Shiite forces. This time, conventional, rather than guerrilla-style weapons were used and responsibility was rapidly claimed.

“It is a major escalation. Ballistic missiles openly launched from Iran onto American targets is a new phase,” said Phillip Smyth, an expert on Shiite militias.

Trump did not go on evening television to address the nation — something of an informal presidential tradition in times of foreign policy crises. But he said to expect a statement early Wednesday.

Oil prices immediately jumped on the news, with the benchmark WTI spiking more than 4.5 percent to $65.54 a barrel before receding slightly.

The Ukraine International Airlines Boeing 737 went down just outside Tehran after taking off bound for Kiev, Iranian state media reported.

There was no immediate suggestion of any link with the Iranian air strikes.

The crash was likely to have been caused by “technical difficulties”, Ali Khashani, spokesman for Imam Khomeini International Airport told Iran’s Press TV.

A video aired by the state broadcaster appeared to show the plane already on fire, falling from the sky.

In the US, the aviation regulator banned civil flights over Iraq, Iran and the Gulf, citing the potential for “misidentification” of aircraft.

The slide into open confrontation followed days of sabre rattling between Washington and Tehran, coupled with growing confusion over the future of US troops in Iraq, where many are outraged at the drone strike.

Earlier, Trump warned that “if Iran does anything that they shouldn’t be doing, they’re going to be suffering the consequences and very strongly.”

Trump, however, did walk back earlier threats to bomb Iranian cultural sites in the event of conflict — something that could be a war crime.

At Soleimani’s funeral in the Iranian city of Kerman, tragedy was added to the geopolitical tensions, when 56 people died and 213 were injured in a stampede as the vast crowd of mourners got out of control, local media reported.

Hours before Iran struck, Trump tried to end confusion over his plans for the approximately US 5,200 troops in Iraq, saying they should stay despite calls by the Iraqi parliament for their expulsion.

“At some point we want to get out, but this isn’t the right point,” Trump told reporters at the White House.

Despite Washington’s assurances, several allies started to leave, raising questions over the future of a US-led mission to help the Iraqis fight the jihadist Islamic State group.

Canada announced that some of its estimated 500 troops will withdraw to Kuwait.

Several other countries, including Germany and Romania, announced plans to move forces.

Trump said Tuesday he favoured eventual withdrawal from Iraq but that under the wrong conditions it would mean a strategic gift to Iran.

Ukrainian airliner crashes after take-off in Iran, killing all 176 aboard