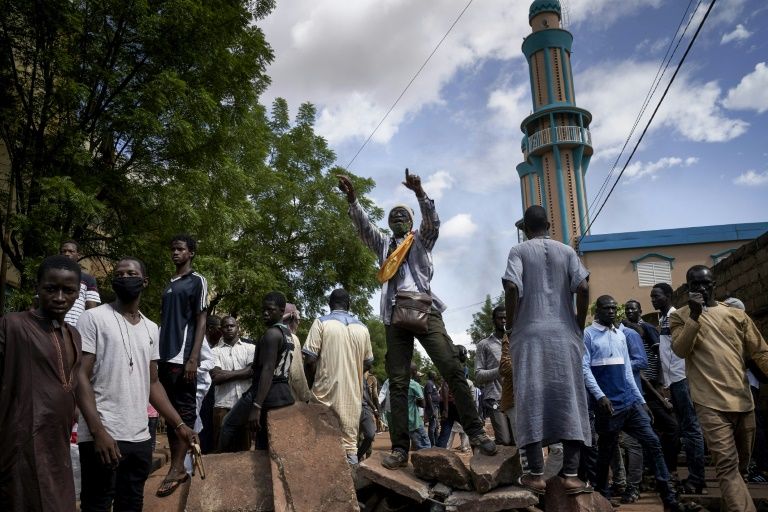 Protesters at a barricade erected in front of the Salam Mosque in Bamako, where Imam Mahmoud Dicko, a leader of the anti-government movement, led prayers on Sunday for victims of the clashes (AFP Photo/MICHELE CATTANI)

Mali’s worried allies and neighbours have appealed for restraint and dialogue as the country’s deepening political crisis spirals into bloodshed.

After three days of unrest in the capital Bamako, representatives of the United Nations, the European Union, the African Union and West African bloc ECOWAS late Sunday voiced their concern.

Condemning “any form of violence as a means of crisis resolution,” they attacked the use of lethal force by the security forces and urged dialogue, but warned that the arrest of protest leaders was an obstacle to this.

President Ibrahim Boubacar Keita is facing a mounting wave of protests sparked by the outcome of a long-delayed parliamentary poll, but whose underlying causes include discontent over his handling of Mali’s jihadist insurgency.

Eleven people have died and 124 have been injured since Friday, according to a senior official at an emergency department of a major hospital in Bamako.

Witnesses said security forces fired live rounds during clashes with protesters, with the civil unrest the worst the country has seen in years.

Bamako remained tense on on Sunday, as hundreds of people converged on the district of Badalabougou for the funerals of four people killed in the violence.

The well-off neighbourhood is a stronghold of influential imam Mahmoud Dicko, who has emerged as a leader of the protest movement.

He appealed for calm on Sunday after deadly clashes between his supporters and security forces.

Despite scattered incidents during the night, a measure of calm had returned to Bamako on Monday morning.

There was heavy police presence on two of the city’s main bridges — major choke points that protesters had targeted — and traffic was circulating.

All banks remained shut, however.

The demonstrations are being driven by a disparate group of religious leaders, political and civil society members that calls itself the June 5 Movement.

They have called for “civil disobedience”, including non-payment of fines and blocking entry to state buildings.

Mali’s European allies and regional partners are anxious, given the country’s poverty, ethnic mix and strategic location at the heart of the Sahel.

Sunday’s statement voiced support for proposals put forward by ECOWAS, the 15-nation Economic Community of West African States of which Mali is a member.

The proposals call for a “consensus government of national union” and for fresh elections in constituencies whose provisional results, in the March-April elections, had been annulled by the Constitutional Court, a move that enabled several members of Keita’s party to be elected.

Keita has already made several attempts to ease the anger, including a promise to dissolve the court.

The former French colony has struggled to contain an Islamist insurgency that first emerged in the north in 2012 before spreading to the centre of the country and to neighbouring Burkina Faso and Niger.

Thousands of soldiers and civilians have been killed and hundreds of thousands of people have been forced to flee their homes.

The UN has deployed 13,000 soldiers to Mali in one of its biggest peacekeeping operations, while France has 5,100 troops in its Barkhane anti-jihadist mission across the Sahel.

A first batch of around 100 French and Estonian troops will be joined later by contingents from the Czech Republic and Sweden, Parly told the French daily La Croix, adding that Italy may also take part.