The Times of Earth, International Edition
0
717 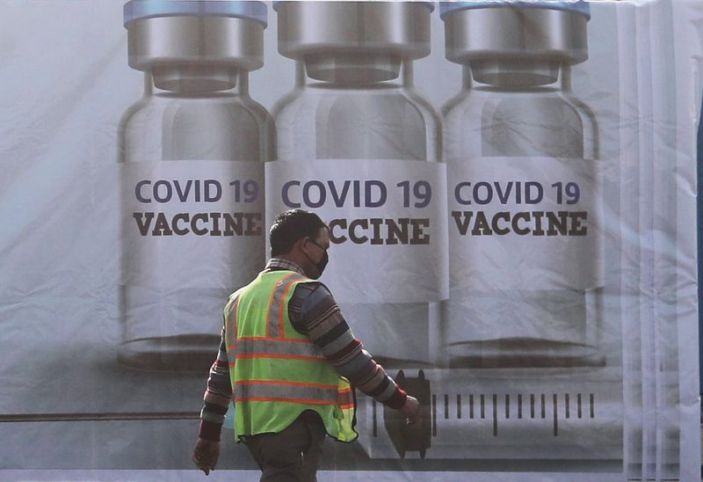 A ground staff walks past a container kept at the Cargo Terminal 2 of the Indira Gandhi International Airport, which according to the officials will be used as a COVID-19 vaccine handling and distribution center, during the media preview in New Delhi, India December 22, 2020. REUTERS/Anushree Fadnavis

The Serum Institute of India, the local maker of the Oxford/AstraZeneca coronavirus vaccine, said on Monday it expected the British and Indian governments to approve shots for emergency use within a few days.

“You will be hearing some good news from the UK very soon,” Serum’s Chief Executive Adar Poonawalla told reporters, adding that approval from the Indian regulator would likely follow shortly.

“By January, we should have the AstraZeneca/Oxford vaccine licensed.”

The company has already made 40 million to 50 million doses of the vaccine and will be able to ramp up capacity to around 100 million a month by March when a new facility comes online, Poonawalla said.

India wants to deliver 600 million coronavirus shots in the next six to eight months starting in January. The country’s drug regulator is also considering similar approvals for the Pfizer/BioNTech vaccine and another developed by India’s Bharat Biotech.

Some Indian states on Monday began a trial run of COVID-19 vaccine delivery systems, with health authorities checking everything from their technology platforms to the storage infrastructure that will be required to inoculate millions.

“The exercise is basically a mock drill for our healthcare workers on how to run the whole vaccination process and system,” Jaiprakash Shivahare, the commissioner for health in the western state of Gujarat, told Reuters.

State health officials had set up 19 vaccination centres, each with 25 dummy beneficiaries played by health workers, who would help test out the entire inoculation sequence, including online monitoring systems, Shivahare said.

“The cold chain infrastructure for distribution of the vaccine is also being tested as a part of the dry run,” he said.

India has the second-highest number of confirmed coronavirus cases in the world after the United States, and it has recorded 147,901 deaths so far.

On Monday, the federal health ministry reported a daily increase of a little over 20,000 infections, taking the country’s total so far to 10.2 million cases.

Approval of Oxford/AstraZeneca could relax restrictions

Gibraltar’s border with Spain still in doubt after Brexit