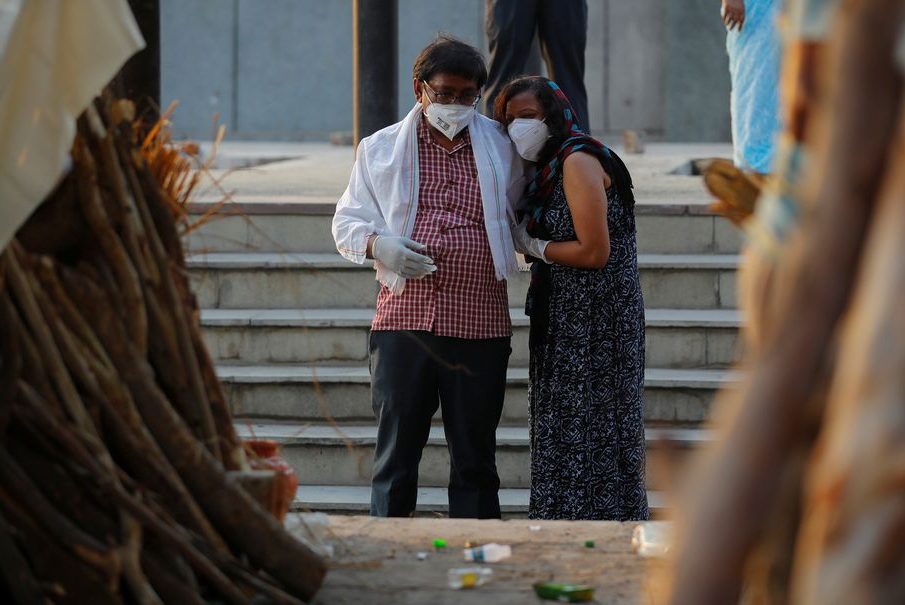 A couple mourns as they stand next to the funeral pyre of a relative who died due to the coronavirus disease (COVID-19), at a crematorium in New Delhi, India, May 10, 2021. REUTERS/Adnan Abidi

India reported a smaller rise in daily coronavirus infections for a third straight day on Sunday, as the government said it was working to boost vaccine supplies to avert deaths beyond the pandemic toll of more than 270,000.

The number of deaths in the past 24 hours rose over 4,000 for the fourth time in a week, with Sunday’s 311,170 new infections representing the lowest single-day rise in more than three weeks.

Federal health officials warned against interpreting a “plateauing” in the rise as a sign for complacency, however, and urged states to add intensive care units and strengthen their medical workforce.

Even though India is the world’s largest vaccine-producing nation, it has fully vaccinated only 2.9% of its population of 1.35 billion, or just over 40.4 million people, health ministry data shows.

India’s supply of vaccine doses should rise to 516 million doses by July, and more than 2 billion between August to December, boosted by domestic production and imports, Health Minister Harsh Vardhan said in a statement.

Vaccines were resulting in milder infections and preventing loss of life, states told Vardhan on Saturday, according to the statement.

But the average vaccination rate over seven days fell to 1.7 million, from 1.8 million a week ago, after Maharashtra, the richest state, and Karnataka in the south put vaccinations on hold for adults younger than 45.

India could protect itself from future waves of the pandemic by vaccinating 510 million people, or more than 40% of its population, over the next few months, surgeon Devi Shetty told news channel India Today in an interview.

“There is no other solution and that is the cheapest solution,” he added. “It is the best solution we have to save millions of lives.”

Prime Minister Narendra Modi opened vaccinations for all adults from May 1, doubling the number of those eligible to an estimated 800 million, though domestic production will stay largely flat, at about 80 million doses a month, until July.

Authorities in Modi’s western home state of Gujarat said they would halt vaccinations on Monday and Tuesday to take protective measures against a cyclone expected to hit its coast next week.

A second batch of the Sputnik V vaccine imported from Russia arrived in the southern technology hub of Hyderabad on Sunday.

But cases have fallen steadily in states hit by an initial surge of infections, such as Maharashtra and the northern state of Delhi, after they imposed stringent lockdowns.

The capital, Delhi, extended its lockdown by a week to next Monday to build on recent gains, Reuters partner ANI reported.

Total infections have risen by more than 2 million this week and deaths by nearly 28,000. Deaths rose by 4,077 on Sunday.

On Saturday, federal health officials said the proportion of positive tests had dipped to 19.8% this week from 21.9% last week, sparking hopes that daily infections had begun to stabilise.

But surges have been seen in states such as Tamil Nadu in the south and rural areas. The government issued new guidelines on Sunday to curb the spread of the virus in India’s vast countryside, urging more surveillance of flu-like symptoms.

Bodies of COVID-19 victims were found to have been dumped in some rivers, the government of the most populous state of Uttar Pradesh said in a letter seen by Reuters, in the first official acknowledgement of the alarming practice.