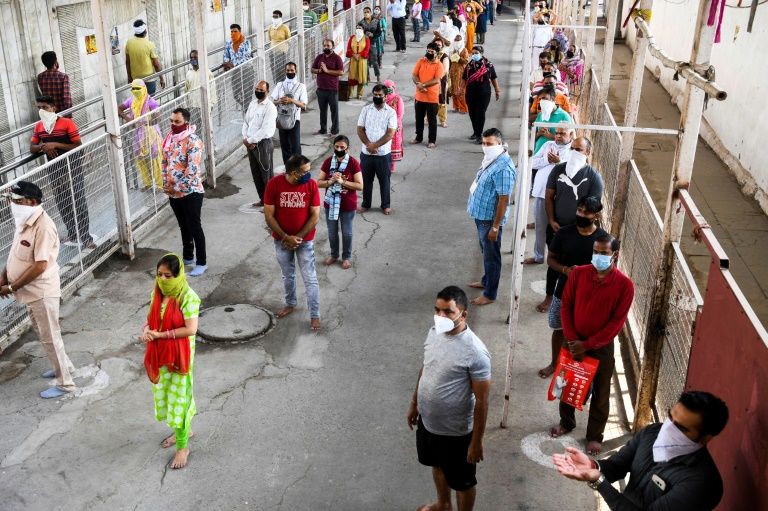 Malls and temples re-opened in several cities across India on Monday despite the country recording a record daily number of new coronavirus infections, with the pandemic expected to ravage the country for weeks to come.

After a 10-week lockdown the government has risked lifting some restrictions in a bid to ease the devastating blow to the economy dealt by the coronavirus.

But the number of new cases rose by 9,983 to 256,611, according to government figures announced Monday, putting the country of 1.3 billion on course to overtake Britain and Spain among nations with the highest number of infections.

The reported death toll of 7,135 is much lower than reported in other badly-hit countries, but the epidemic is only expected to peak locally in July, according to health experts.

Still, in the capital Delhi, shopping malls, restaurants, temples and mosques were allowed to re-open for the first time since March 25.

The response was tentative, however, and only a trickle of people returned to some places of worship.

Businessman Mohit Budhiraja, wearing a mask and carrying sanitiser, went to his local temple in eastern Delhi for the first time since the lockdown.

“It felt like something was missing when I couldn’t come to the temple for all these weeks,” he said.

“I hope things improve, but now I will come every day.”

Many temples set up sanitisation tunnels at their entrances and barred worshippers from bringing offerings.

“People are having their temperature tested twice before they get in,” said Ravindra Goel, a trustee of the Jhandewalan temple, one of the oldest in Delhi.

The 400-year-old Jama Masjid mosque — one of the biggest in India — planned to allow the faithful in just three times a day instead of the usual five.

Delhi is one of India’s worst coronavirus hotspots, accounting for more than 27,600 cases and 761 deaths — although media reports say the real figures are much higher.

Mumbai, which accounts for around a fifth of India’s cases and hospitals have been overrun, was more cautious. Roadside shops were allowed to re-open, but malls, restaurants and hair salons remained shuttered.

The Indian government says the tough lockdown it ordered on March 25 has limited the spread of the coronavirus.

But it is now braced for a major hit to the economy, with millions of labourers now jobless.

Rating agencies have said the economy could contract by more than five percent this year, after average growth of about seven percent over the past decade.

Despite restrictions being eased last month, India’s manufacturing sector is struggling to restart because of an exodus of migrant workers prompted by the virus lockdown.

Big cities — once an attractive destination for workers from poor, rural regions — have been hit by reverse migration as millions of labourers fled to their village homes.

“A lot of the manufacturing industry is actually located in the very states where the pandemic’s impact has been great,” Professor Santosh Mehrotra at Jawaharlal Nehru University told AFP last week.

“Now these are the areas where naturally workers have left in large numbers… They will not return in a hurry.”