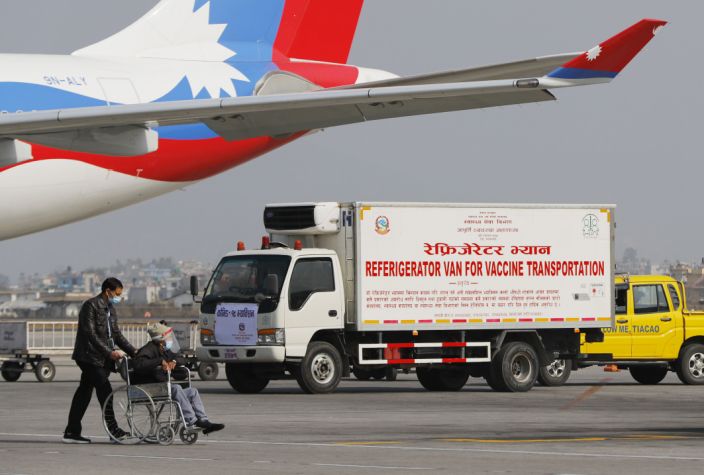 A van stands parked waiting to transport AstraZeneca/Oxford University vaccines, manufactured under license by Serum Institute of India, at Tribhuwan International Airport in Kathmandu, Nepal, Thursday, Jan. 21, 2021. India sent 1 million doses of a coronavirus vaccine to Nepal on Thursday, a gift that is likely to help repair strained ties between the two neighbors. (AP Photo/Niranjan Shrestha)

India sent 1 million doses of a coronavirus vaccine to Nepal on Thursday, a gift that is likely to help repair strained ties between the two neighbors.

Nepal health minister Hridayesh Tripathi said the AstraZeneca/Oxford University vaccine, manufactured under license by Serum Institute of India, will be given to health workers and other front-line personnel within a week to 10 days.

Tripathi said Nepal would like to purchase 4 million more doses, and asked for the Indian government’s help. There was no immediate response from Indian officials who were the airport when the vaccine arrived.

India, the world’s largest vaccine producer, began supplying coronavirus vaccine to its neighbors this week as it attempts to strike a balance between maintaining enough doses to inoculate its own people and helping developing countries without the capacity to produce their own vaccine.

India’s foreign ministry said it sent 150,000 doses to Bhutan and 100,000 doses to the Maldives on Wednesday, and would send more to Bangladesh, Myanmar and the Seychelles in coming weeks.

Relations between India and Nepal have been strained by a territorial dispute which led to an exchange of strong-worded statements by the two sides.