Home›Email›In Ukrainian street, a corpse with hands bound and a bullet wound to the head
EmailEuropeHightlightsMost Popular WorldPoliticsReadRecommendedViewsWorld News

In Ukrainian street, a corpse with hands bound and a bullet wound to the head

The Times of Earth, International Edition
0
297 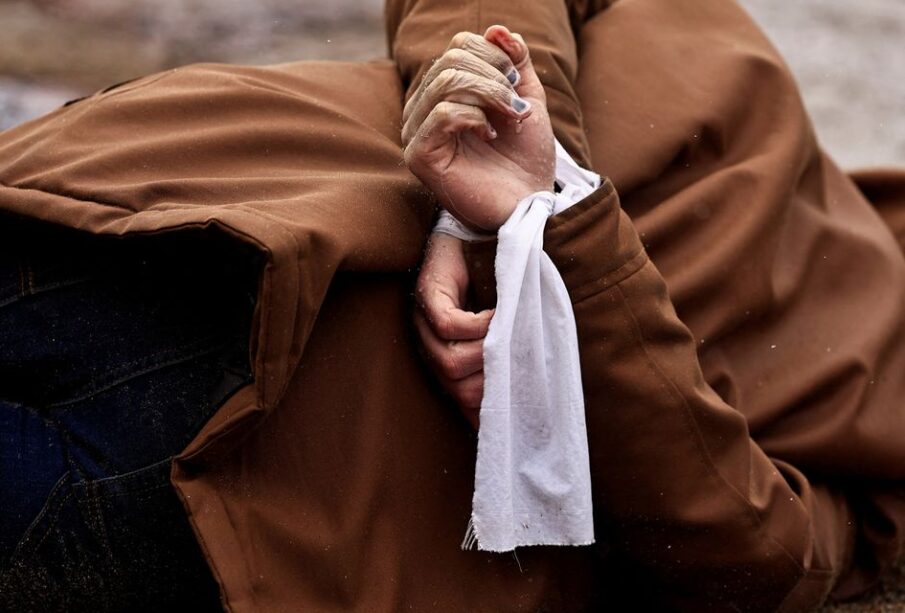 A body with hands bound by white cloth, who according to residents was shot by Russian soldiers, lies in the street, amid Russia's invasion on Ukraine, in Bucha, Ukraine April 3, 2022. REUTERS/Zohra Bensemra

A man lay sprawled by the roadside in the Ukrainian city of Bucha on Sunday, his hands tied behind his back and a bullet wound to his head, one of hundreds of local residents that officials say have been found dead in the wake of five weeks of Russian occupation.

Bucha’s deputy mayor, Taras Shapravskyi, said 50 of the dead residents, found after Russian forces withdrew from the city late last week, were the victims of extra-judicial killings carried out by Russian troops, and the officials have accused Moscow of war crimes.

Russia’s defence ministry said in a statement issued on Sunday that all photographs and videos published by the Ukrainian authorities alleging ‘crimes’ by Russian troops in Bucha were a “provocation,” and no resident of Bucha suffered violence at the hands of Russian troops.

Reuters was not able to independently verify who was responsible for killing the dead residents.

But three bodies seen by Reuters reporters on Sunday — the corpse with the hands bound and two others which did not have bound hands — bore bullet shots to the head consistent with what Bucha mayor Anatoliy Fedoruk and his deputy described as executions.

In all three cases, there were no signs of any other significant injuries elsewhere in the body. All three people shot in the head were male, and all three were dressed in civilian clothing.

On the body of the person whose hands were bound, there were powder burn marks on his lips and face. Such marks can mean a person was shot at close range.

The cloth used to bind the man’s hands appeared to be a white armband. Russian troops, while they were in Bucha, required that local residents wear the armbands to identify themselves, according to one woman who was still wearing hers.

Reuters sent questions to the Kremlin and the Russian defence ministry about the corpses that its reporters had witnessed, but received no immediate reply.

Russia’s defence ministry, in its statement on Sunday said: “During the time that Russian armed forces were in control of this settlement, not a single local resident suffered from any violent actions.” It added that before Russian troops withdrew on March 30 they delivered 452 tons of humanitarian aid to civilians around the Kyiv region.

Shapravskyi, the deputy mayor, said some 300 people were found dead after the Russian withdrawal. Of these, he said officials so far have logged 50 as executions carried out by Russian forces. Reuters could not independently verify those figures.

The others were either killed in crossfire, or their deaths are so far unexplained.

“Any war has some rules of engagement for civilians. The Russians have demonstrated that they were consciously killing civilians,” Fedoruk, the mayor, said as he showed Reuters reporters one of the bodies.

Reuters was not able to independently verify the descriptions provided by the residents.

Sobbing as she gestured at her husband’s shallow grave, a shot of vodka topped with a cracker resting on freshly dug earth, Tetyana Volodymyrivna recounted an ordeal at the hands of Russian troops in this city 37 km (23 miles) northwest of Kyiv.

She and her husband, a former Ukrainian marine, were dragged from their apartment when Russian troops set up their command centre in their building. The soldiers held them prisoner in the apartment building where they lived.

She said the Russians, when they arrived in the city, asked people who they were, and demanded to see documents.

She said a fighter with the Russian forces who she believed was from Russia’s semi-autonomous Chechnya region warned he would “cut us up.” She did not say how she knew he was Chechen.

Reuters sent a request for comment to the office of the leader of Chechnya, Ramzan Kadyrov, a Kremlin loyalist, but received no reply.

Tetyana, who identified herself by her first name and patronymic but did not give her family name, was released after being held for four days. Her husband was nowhere to be seen for several days, until she was told about some bodies in a basement stairwell of the building where she and her husband lived.

“I recognised him by his sneakers, his trousers. He looked mutilated, his body was cold,” she said. “My neighbor still has a picture of his face. He had been shot in the head, mutilated, tortured.”

Reuters reviewed the photograph, which showed that the face and body were badly mutilated. The news agency could not determine if there was a bullet wound.

After recovering her husband’s body, she and some neighbours buried it in a garden plot near their building, just deep enough “so dogs wouldn’t eat him,” she said.

Another corpse still lay in the stairwell where her husband was found, a Reuters reporter saw. Local residents covered the body with a bedsheet as a mark of dignity.

Around the corner, another grave contained the remains of two men, a woman resident told Reuters. She said the men had been taken away by Russian troops. She did not witness them being killed. When the bodies were found, both had been shot through the left eye, she said. Six other residents gathered near the grave said her account was correct.

One of the residents said she recognised one of the dead men as a tenant in the apartment complex, who she said was a retired member of the Ukrainian military.

Bucha was captured in the days immediately after the Feb. 24 invasion of Ukraine by Russian forces who swept south, capturing the defunct nuclear reactor at Chernobyl and moving southwards toward the capital.

Bucha and the northern outskirts of nearby Irpin were the point at which the Russian advance from the northwest was halted after they met with unexpectedly fierce resistance from Ukrainian forces.

The area witnessed some of the bloodiest fighting of the battle for the capital, until Russian forces pulled back from north of Kyiv. Moscow said in late March it was regrouping to focus on battles in eastern Ukraine.

On Saturday, Ukraine said its forces had retaken all areas around Kyiv and that it now had complete control of the capital region for the first time since the invasion.

On Sunday, roads in Bucha were littered with unexploded ordnance. Rockets poked out of the tarmac near burned-out wrecks of tanks. Some residents scrawled “Beware, mines” on their walls in chalk after finding booby traps or missiles on their premises.

Resident Volodomir Kopachov said Russians troops had set up a rocket system in a vacant lot next to his garden. When a Reuters reporter visited, boxes of ammunition and spent shell casings littered the ground.

Kopachov, a Ukrainian dog breeder, was in mourning.

He said his 33-year-old daughter, her boyfriend and a friend were shot dead by Russian troops after firing a party streamer towards them just days before the pullback. Kopachov’s wife said they fired the streamer as a gesture of defiance, not with the intent of harming the soldiers.

“It is so hard to go through it all,” said the 69-year-old,” as 10 Alabai, a breed of prized Central Asian Shepherd dog, barked in his backyard.

Kopachov said he had not ventured beyond the gates of his house for a month. “They were killing [people] on the spot. No one asked: ‘who you are, why you are out?’. The men were simply shot.”

The Kremlin denies that it has invaded Ukraine, saying it is carrying out a “special military operation” to degrade the Ukrainian armed forces and is targeting military installations rather than carrying out strikes on civilian areas.

Speaking in Hostomel, near Bucha, on Sunday, Ukrainian Defence Minister Oleksii Reznikov said: “This is not a special operation, these are not police actions… These are inhumans who simply committed crimes against civilians.”