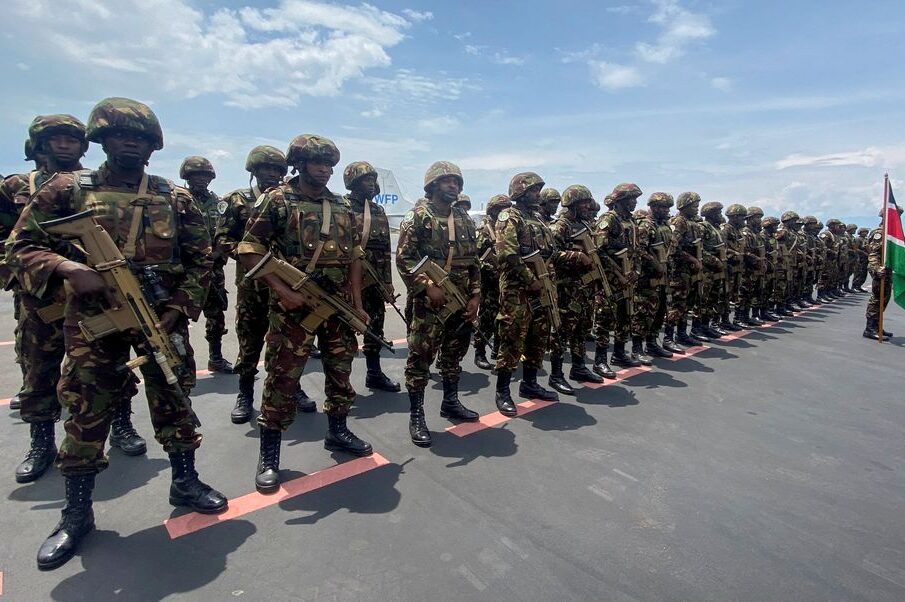 Members of Kenya Defence Forces (KDF), part of the troops of the East Africa Community Regional Force (EACRF), parade as they arrive for their deployment as part of a regional military operation targeting rebels, at the airport in Goma in the North Kivu province of the Democratic Republic of the Congo November 12, 2022. REUTERS/Djaffar Sabiti

Fighting in the Democratic Republic of Congo between the army and M23 rebels has moved close to the key eastern city of Goma, said an army spokesperson on Monday, causing a fresh wave of displacement amid diplomatic efforts to resolve the conflict.

Clashes picked up again in North-Kivu province on Friday, ending about a week of relative calm since the group launched their latest offensive on Oct. 20.

Battles have broken out around the villages of Kibumba, Rugari and Tongo, North-Kivu army spokesperson Guillaume Ndjike said.

Kibumba is around 20 km (12 miles) north of Goma, which the M23 briefly overran during their first big insurrection in 2012.

“They are attacking but we are containing them and taking initiatives to push them back,” Ndjike told Reuters.

A Tongo resident who did not wish to be named said via telephone that the army had left and that people were fleeing en masse. A witness in Kibumba painted a similar picture.

The M23 have staged a major come-back in east Congo this year since they were chased into neighbouring Rwanda and Uganda in 2013.

Tens of thousands have fled fresh fighting that has caused a diplomatic rift between Congo and Rwanda, which Congo accuses of backing the Tutsi-led group. Rwanda denies any involvement.

Regional efforts are under way to cool tensions between the two countries and end the conflict unfolding along their shared border.

Kenya’s ex-President Uhuru Kenyatta, who has been in Congo this week ahead of peace negotiations with armed groups, said talks in Nairobi would be held before the end of the month – later than the original proposed date of this Wednesday.

“We have not come here with a prescription but rather with the idea of listening to our brothers and sisters and hopefully to be able to make a contribution towards bringing lasting peace,” he said late on Monday after meeting various stakeholders.

Angolan President Joao Lourenco mediated earlier talks between Congolese and Rwandan officials in Luanda and visited both nations over the past weekend.

An M23 leader, Bertrand Bisimwa, blamed Congo’s army for starting a war against the group.

“They are not taking responsibility for their initiative,” he told Reuters by telephone.

Hundreds have fled to the village of Kibati, around 15 kilometres (9 miles) away from Goma, in recent days.

Kibati has set up three camps for internally displaced people over the past month. Some have taken refuge in houses already abandoned by residents moving further south, according to a Reuters reporter.

“I left my wife and children behind, I didn’t even take clothes,” said Ndazimana Kasigwa, 25, who came from Rugari.

At least 188,000 have been displaced in North-Kivu since Oct. 20, according to the United Nations.