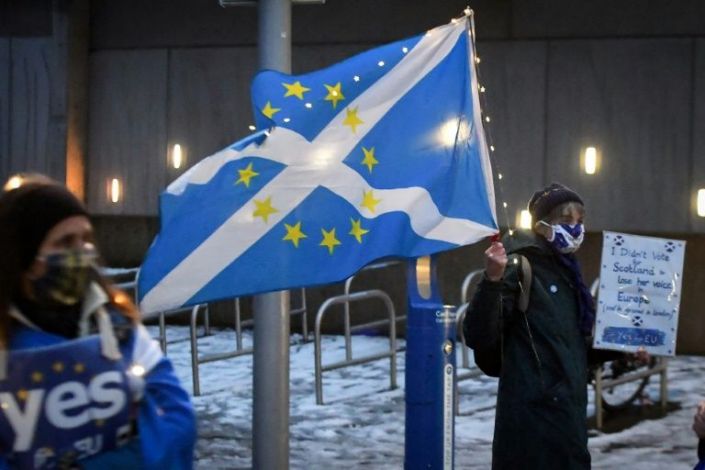 Anti-Brexit pro-Scottish independence activists were out Thursday in Edinburgh as Britain's exit from the EU single market and customs union approached. AFP

The streets of Scotland’s capital are normally packed at Hogmanay, as people from across the country and around the world flock to see in the New Year in raucous style.

As with so much else, the coronavirus outbreak has put paid to the celebrations, putting Scots in a gloomy mood made worse by Britain’s parting of the ways with Europe.

The shops selling tartan and whisky on Edinburgh’s historic cobbled Royal Mile are shuttered and silent, plunged into darkness as snow falls.

But there is hope among supporters of Scottish independence that 2021 will bring some cheer.

As Britain leaves Europe’s single market and customs union, one local resident, Zoe Stewart, said she has never felt so out of touch with the rest of the country.

“I think it’s really sad that we’re leaving. I don’t want to leave the EU,” Stewart, who was one of the 62 percent of Scots who voted against Brexit, told AFP.

“I think we should go for it, independence,” she said, raising a fist and smiling. “Just to be independent. Just to have our own choices and not follow England all the time.”

The pro-independence Scottish National Party (SNP) of Scotland’s First Minister Nicola Sturgeon is keen to seize the political initiative and capitalise on frustrations after January 1.

The SNP makes no secret of its desire to hold a new referendum on independence after losing a previous one in 2014.

The party is widely tipped to win Scottish parliamentary elections next May, and victory would increase the pressure on the UK government in London to agree to a second vote.

According to a poll conducted by Savanta ComRes for The Scotsman newspaper in mid-December, 58 percent of Scots now support a break with the UK — an all-time high.

“It is very difficult to detect a trend. It fluctuates. The first part of 2020 was roughly 50/50,” said Nicola McEwen, professor of territorial politics at the University of Edinburgh.

The second half of the year shows a majority of up to 59 percent backing independence, “mainly on the backdrop of Covid”, she added.

Sturgeon began organising regular daily media briefings on the coronavirus in March and has since given 150, winning praise for her approach.

The Guardian newspaper described her as “a model of factual reliability, sound advice and caution”.

She has benefited politically from her management of the health crisis, while UK Prime Minister Boris Johnson has been perceived as more erratic.

Under a portrait of Sturgeon, Mike Blackshaw is already running an online campaign for a hypothetical referendum from his Yes Cafe, a hub for local pro-independence activists.

The badges and T-shirts are ready to go, combining the blue-and-white Saltire flag of Scotland and the stars of the EU.

“I think 2021 is going to be a busy year for the independence movement,” says the veteran campaigner with a long white beard.

Along with singing “Auld Lang Syne”, one of the main traditions at Hogmanay is “first footing”, with the first visitor to cross the threshold after midnight bringing good luck for the new year.

This year, though, Blackshaw has only one wish: for an independence referendum in September.

World ushers in New Year in shadow of pandemic