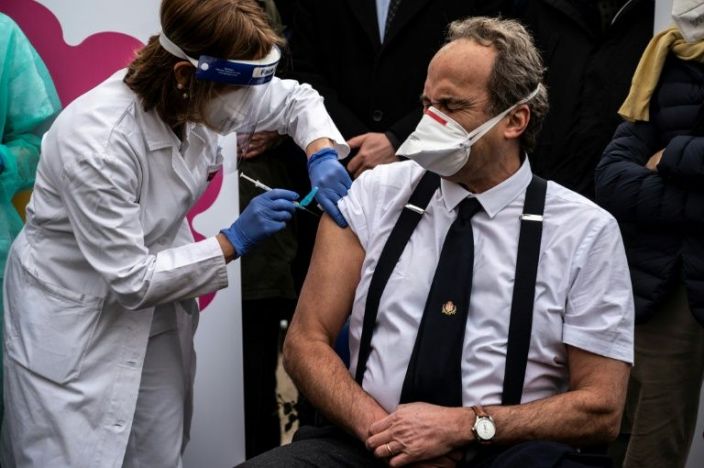 Most vaccination campaigns have been hampered by limited stocks of doses and logistical constraints. AFP

Armed with Covid-19 vaccines developed in record time, authorities across Europe are scrambling to quickly innoculate populations against an outbreak that has killed more than 626,000 people on the continent.

Despite high hopes and ambitious goals, most vaccination campaigns are off to a slow start, hampered by limited stocks of doses and logistical constraints. In some cases policy decisions have also drawn fire.

And barely weeks into the drive, rates of vaccination differ widely across the continent.

Britain is leading the way with three vaccines approved and 2.6 million doses administered to 2.3 million people — more than all other countries of Europe put together.

London is keenly aware of the symbolism of its advance, following Britain’s official exit of the EU customs union on January 1 in the final act of Brexit.

The notable laggards include France, Belgium and the Netherlands, where only tiny fractions of the population have received jabs even while neighbours like Germany or Spain have vaccinated hundreds of thousands.

Russia was first out of the gate in August, embarking on a mass programme with Sputnik 5, a homegrown jab developed by its Gamaleya research institute.

As of this week, over one million Russians have been vaccinated, a small fraction of the country’s population of some 145 million.

Most other countries waited for a vaccine from Pfizer and BioNTech, with Britain the first in Europe to approve the treatment for a widespread campaign launched on December 8 — deemed “V-Day” by its health minister.

Member states were left to decide who would be first in line for the two injections needed, spaced a few weeks apart, though most focussed initially on the elderly, for whom the virus is most dangerous, and front-line healthcare workers.

Some countries have moved quickly, vaccinating tens of thousands in the first few days, while others have struggled to deploy doses or insisted on a cautious rollout.

France saw only a few hundred people vaccinated after the first week of availability, an embarrassment for the government that raised questions about the competence of its much-vaunted healthcare system.

Britain, meanwhile, in late December approved a vaccine from AstraZeneca and Oxford University as part of its goal to have 15 million people vaccinated by mid-February.

EU regulators say the AstraZeneca jab could be approved by January 29.

On January 6, the bloc bolstered its arsenal by approving a vaccine from the US biotech Moderna, followed quickly by Britain.

Other EU candidate vaccines still being developed are from Johnson & Johnson, Sanofi/GSK and Curevac, and negotiations are ongoing for one from Novavax.

Experts say 70 percent of a country’s population must be innoculated against Covid-19 in order to end a pandemic that has wreaked social and economic havoc.

Here is a breakdown of vaccination numbers by country, and as a percentage of total population, based on the most recent official figures:

Albania launched its campaign on January 11. Kosovo, Macedonia, Ukraine, Turkey have not started their vaccination drives.