The Times of Earth, International Edition
0
371 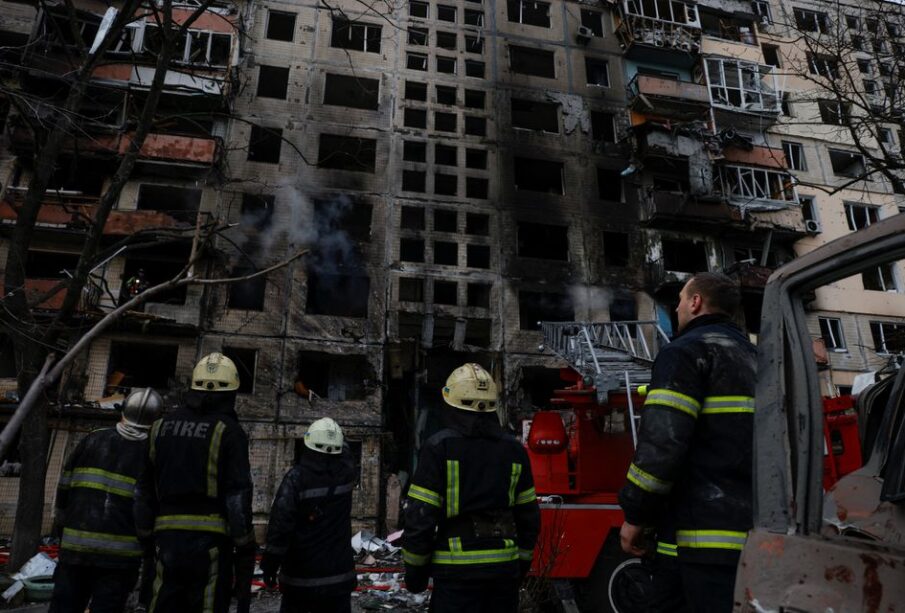 Firefighters look at a residential building that was hit by a shell as Russia's attack on Ukraine continues, in the Obolon district in Kyiv, Ukraine, March 14, 2022. REUTERS/Thomas Peter

Ukraine said it held “hard” talks on a ceasefire, immediate withdrawal of troops and security guarantees with Russia on Monday, despite the fatal shelling of a residential building in Kyiv.

Both sides had suggested some results could be in sight after earlier rounds primarily focused on ceasefires to get aid to towns and cities under siege by Russian forces and evacuate civilians; those truces have frequently failed.

Firefighters tackled the remains of a blaze at the damaged apartment block in the capital, where a stunned young resident described the chaos of the previous night in a city targeted by the Russian advance but so far largely spared bombardment.

Officials said at least one person died in the shelling and a second person was killed by falling debris after a missile strike on another part of the Ukrainian capital.

“The staircase was not there anymore, everything was on fire,” Maksim Korovii told Reuters, describing how he and his mother had first hid inside their dust and smoke-filled apartment, thinking Russian forces were breaking down the door.

“We didn’t know what to do. So we ran out to the balcony. We managed to put on whatever clothes we had at hand and made our way from balcony to balcony and in the end we climbed down by the next building’s entrance,” he said.

Russia denies targeting civilians, saying it is conducting a “special operation” to demilitarise and “denazify” Ukraine. Ukraine and Western allies call this a baseless pretext for a war of choice.

Russia’s defence ministry said at least 20 people had been killed and 28 wounded in the capital of the eastern Donetsk region by what it said, without providing evidence, was a Ukrainian missile with a cluster charge.

Pro-Russian separatists who control the region said earlier a child was among those hit, calling it a war crime. A Ukrainian official denied the reports, which Reuters was unable to independently verify.

“It is unmistakably a Russian rocket or another munition,” Ukrainian military spokesman Leonid Matyukhin said. Ukraine and its allies have previously said Russia might attack its own side to create pretexts for further offensives against Ukraine.

The U.N. human rights office said its monitors in Ukraine had confirmed the deaths of at least 636 civilians, including 46 children. The actual toll is likely much higher, it said, since there have been delays receiving and corroborating reports from areas of intense hostilities such as Kharkiv and Mariupol.

More than 2,500 residents of Mariupol have been killed so far, presidential adviser Oleksiy Arestovych said. A pregnant woman pictured being evacuated from a bombed maternity unit there last week had died, according to the foreign ministry. Reuters was not immediately able to verify those reports.

Multiple evacuation attempts from the besieged southern port have failed but the city council said 160 cars had left Mariupol at lunchtime on Monday.

He later said discussions were hard, because the political systems of Russia and Ukraine were too different. Talks paused on Monday and would resume on Tuesday, he said.

Podolyak said he believed Russia “still has a delusion that 19 days of violence against (Ukrainian) peaceful cities is the right strategy.”

Russia has accused Ukraine of using civilians as human shields, an allegation Kyiv has firmly denied.

SLOW OR ACCORDING TO PLAN?

The Kremlin said everything was going to plan after one of Putin’s closest allies, National Guard chief Viktor Zolotov, made the strongest public acknowledgement yet that the operation was slower than hoped.

Russia has enough military clout to accomplish its aims in Ukraine on time and in full, Kremlin spokesman Dmitry Peskov said. He added that by suggesting it was disappointed, the United States and EU were tempting Russia into storming major population centres in Ukraine, something he said Putin had asked the army not to do.

The Kyiv city administration said the Antonov aircraft plant there had been shelled. Reuters was not immediately able to verify that report. Regional governor Oleksiy Kuleba said frontline towns near Kyiv were being evacuated for a fifth day, although he could hear occasional explosions in the distance.

The invasion has sent more than 2.8 million people fleeing across Ukraine’s borders and trapped hundreds of thousands in besieged cities.

Moscow attacked a base near the border with NATO member Poland on Sunday in what Britain called a significant escalation. Ukraine said 35 people had been killed while Moscow said up to 180 “foreign mercenaries” died and many foreign weapons were destroyed.

Kyiv said the base had hosted military instructors but NATO said it now had no personnel in Ukraine. Reuters could not independently verify the casualty reports and it was not clear if any non-NATO foreign personnel had been there.

Global financial markets, which had been riven by fears the conflict could drag in NATO, rallied on hopes for peace talks. Stocks rose while oil prices gave up some of their massive recent gains.

The West has sanctioned Russian businessmen, frozen state assets and cut off much of the corporate sector.

According to several U.S. officials, Russia has also asked China for military equipment. Kremlin denied that, while a foreign ministry spokesperson in Beijing accused Washington of “disinformation.”

More Ukraine-Russia talks scheduled as attack on base kills dozens