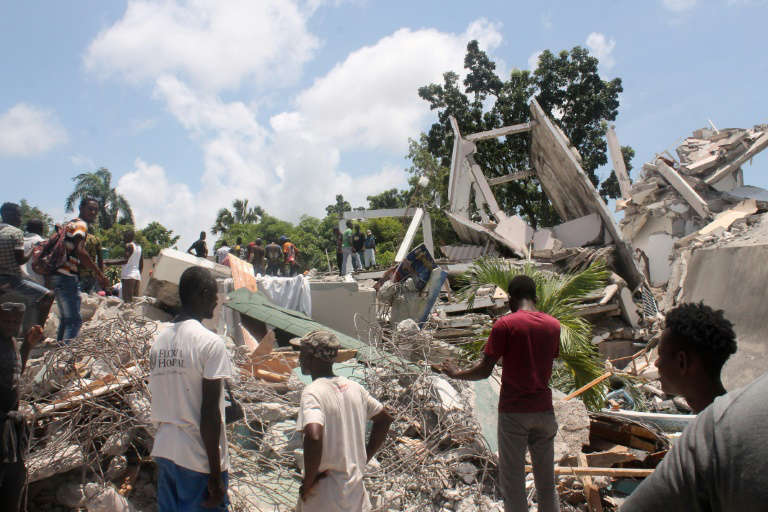 Rescue workers were scrambling to find survivors after a powerful 7.2-magnitude earthquake struck Haiti, killing at least 304 and toppling buildings in the disaster-plagued Caribbean nation still recovering from a devastating 2010 quake.

The epicenter of the tremor, which rattled homes and sent terrified locals fleeing for safety Saturday morning, was about 100 miles (160 kilometers) by road west of the center of the densely populated capital Port-au-Prince.

Churches, businesses, schools and homes crumbled in the quake that trapped hundreds of victims under rubble and left at least 1,800 people injured, the country’s civil protection agency said.

Rescuers raced against the clock to find survivors, with the agency tweeting that efforts by “both professional rescuers and members of the public have led to many people being pulled from the rubble,” adding that already overburdened hospitals continued to receive injured.

Hours after the quake, the agency announced the death toll had jumped to 304, ticking upwards throughout the day from a first report of 29 fatalities.

The quake was felt in much of the Caribbean, emanating from the epicenter at Haiti’s southwestern peninsula.

The civil protection agency said at least 160 people were killed in the country’s South department alone.

“Lots of homes are destroyed, people are dead and some are at the hospital,” 21-year-old Christella Saint Hilaire, who lives near the epicenter, told AFP.

Hospitals in the regions hardest hit by the quake were already struggling to provide emergency care and at least three were full, according to Jerry Chandler, head of the civil protection agency.

Haiti’s health ministry quickly dispatched personnel and medicine to the southwestern peninsula, but their arrival could be hampered by the insecurity that has for months plagued the poorest country in the Americas.

“The UN is working to support rescue and relief efforts,” he tweeted.

A medical brigade of 253 Cuban doctors deployed in Haiti was traveling to treat the injured and adapt a Port-au-Prince hospital until now used for Covid patients, their head said on Cuban television.

In Ecuador, the Quito Fire Department said it was preparing to send a team of 34 personnel specialized in urban search and rescue.

Mexico, Chile, Argentina, Peru and Venezuela also offered help while Spanish Prime Minister Pedro Sanchez said Haitians “can count on the support of Spain to come through this terrible event.”

Tennis star Naomi Osaka, whose father is Haitian, said she was going to donate her prize money from an upcoming tournament to help quake victims.

“Really hurts to see all the devastation that’s going on in Haiti, and I feel like we really can’t catch a break,” Osaka tweeted.

Images on social media showed people frantically trying to pull victims from the ruins of caved-in buildings, while screaming bystanders sought safety in the streets outside their homes.

“Houses and their surrounding walls have collapsed. The roof of the cathedral has fallen down,” resident Job Joseph told AFP from the city of Jeremie on Haiti’s western end.

Heavy damage was reported in the center of the city, home to around 200,000 people and composed primarily of single-story buildings.

The damage in the city of Les Cayes appeared to be significant, including the collapse of a multi-story hotel.

Prime Minister Ariel Henry, who surveyed the damage via helicopter, declared a state of emergency for one month while calling on the nation to “show solidarity” and not panic.

Rescue efforts could be hampered by Tropical Storm Grace, which is expected to bring heavy rainfall and possible flash floods to Haiti from late Monday, according to the US National Weather Service.

A brief tsunami alert after the quake sent parents “fleeing the city with their children in arms,” Jeremie resident Tamas Jean Pierre said.

More than 1.5 million Haitians were made homeless in the disaster which also destroyed 60 percent of Haiti’s healthcare system, leaving island authorities and the international humanitarian community with a colossal challenge.

The rebuilding of the country’s main hospital remains incomplete, and NGOs have struggled to make up for the state’s many deficiencies.