The Times of Earth, International Edition
0
341 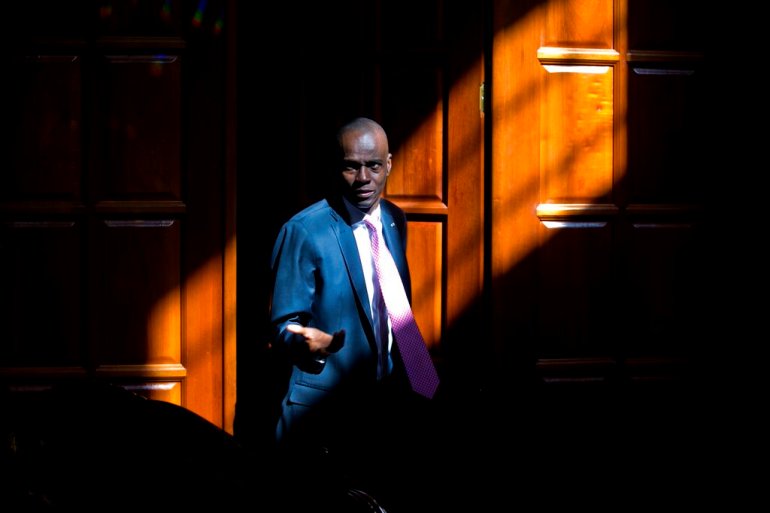 Haitian President Jovenel Moise arrives for an interview at his home in Petion-Ville, a suburb of Port-au-Prince, Haiti. Moïse was assassinated in an attack on his private residence early Wednesday, July 7, 2021, and First Lady Martine Moïse was shot in the overnight attack and hospitalized, according to a statement from the country’s interim prime minister. (AP Photo/Dieu Nalio Chery, File)

Haitian President Jovenel Moise was shot dead by gunmen with heavy-caliber weapons in his private residence overnight on Wednesday, sparking an international outcry amid fears of a descent into chaos in the impoverished Caribbean nation.

The assassination, which drew condemnation from Washington https://www.reuters.com/world/americas/us-assessing-tragic-attack-that-killed-haiti-president-white-house-2021-07-07 and neighboring Latin American countries, coincided with a spate of gang violence in Port-au-Prince in recent months fueled by a growing humanitarian crisis and political unrest https://www.reuters.com/world/americas/haitis-history-violence-turmoil-2021-07-07. The disorder has turned many districts of the capital into no-go zones.

Interim Prime Minister Claude Joseph said in televised remarks after chairing a cabinet meeting that the government had declared a state of emergency amid confusion over who would take over the reins of the country. “My compatriots – remain calm because the situation is under control,” he said.

The 53-year-old president’s wife, Martine Moise, was also shot in the attack at around 1 a.m. local time (0500 GMT) at the couple’s home in the hills above Port-au-Prince, Joseph said in a statement. She was receiving medical treatment.

“Early information suggests it was a group of people who spoke English and Spanish. They were armed with high-caliber weapons,” Joseph said in his address to the nation. He said the assassination was a “barbaric act”.

In videos circulating on social media that Reuters was not yet able to verify, the gunmen claimed to be members of the U.S. Drug Enforcement Administration (DEA) as they entered Moise’s guarded residence. A DEA spokeswoman did not immediately respond to a request for comment.

Joseph said the police and army had the security situation under control. The streets of the usually bustling capital of 1 million people were quiet and empty on Wednesday morning after the attack and intermittent gunfire overnight.

The international airport of Port-au-Prince was closed, according to local media. The airport director could not immediately be reached for comment.

But with Haiti politically polarized and facing growing hunger, fears of a breakdown in order are spreading.

The Dominican Republic closed the border it shares with Haiti on the Caribbean island of Hispaniola, except to returning nationals, and beefed up security.

“This crime is an attack against the democratic order of Haiti and the region,” Dominican Republic President Luis Abinader said.

Leaders worldwide condemned the assassination and appealed for calm.

“We stand ready to assist as we continue to work for a safe and secure Haiti,” said U.S. President Joe Biden, denouncing the killing as “heinous” https://www.reuters.com/world/americas/us-assessing-tragic-attack-that-killed-haiti-president-white-house-2021-07-07 and calling the situation worrisome.

Joseph called for the United Nations to hold a Security Council meeting as soon as possible. U.N. Secretary-General Antonio Guterres did not immediately reply to his appeal but said the world body would “continue to stand with the government https://news.trust.org/item/20210707134902-xg7zy and the people of Haiti.”

Diplomats in New York said the 15-member council was likely to meet in the coming days to be briefed on the assassination.

It was unclear who would succeed Moise as president. He had appointed a new prime minister this week who has yet to be sworn in. The head of the Supreme Court of Justice – another contender for the job under Haiti’s constitution died last month of COVID-19 and has yet to be replaced.

Haiti, a country of about 11 million people and the poorest in the western hemisphere, has struggled to achieve stability since the fall of the Duvalier dictatorship in 1986, and has grappled with a series of coups and foreign interventions.

A U.N. peacekeeping mission – meant to restore order after a rebellion toppled then-President Jean-Bertrand Aristide in 2004 – ended in 2019 with the country still in disarray https://www.reuters.com/article/us-haiti-politics-idUSKBN1WU2SP. In recent years, Haiti has been buffeted by a series of natural disasters and still bears the scars of a major earthquake in 2010.

After taking office as president in 2017, Moise, a banana exporter-turned-politician, faced fierce protests over corruption allegations and his management of the economy.

This year, opposition leaders accused him of seeking to install a dictatorship by overstaying his mandate and becoming more authoritarian. He denied those accusations.

Moise had ruled by decree for more than a year after the country failed to hold legislative elections, and he sought to push through a controversial constitutional reform that he said would finally fix the problems causing Haiti’s instability.

The U.S. Embassy said it would be closed on Wednesday due to the “ongoing security situation”.

“We stand ready and stand by them to provide any assistance that’s needed,” she said. “Of course our embassy and State Department will be in close touch but it’s a tragedy. We stand with them and it’s important that people of Haiti know that.”

The United States, which is Haiti’s top aid donor and has long exerted an outsized weight in its politics, had on June 30 condemned what it described as a systematic violation of human rights, fundamental freedoms and attacks on the press in the country. The Biden administration urged the Haitian government to counter a proliferation of gangs and violence.