Global virus deaths top 150,000 as US braces for lockdown protests

The Times of Earth, International Edition
0
1000 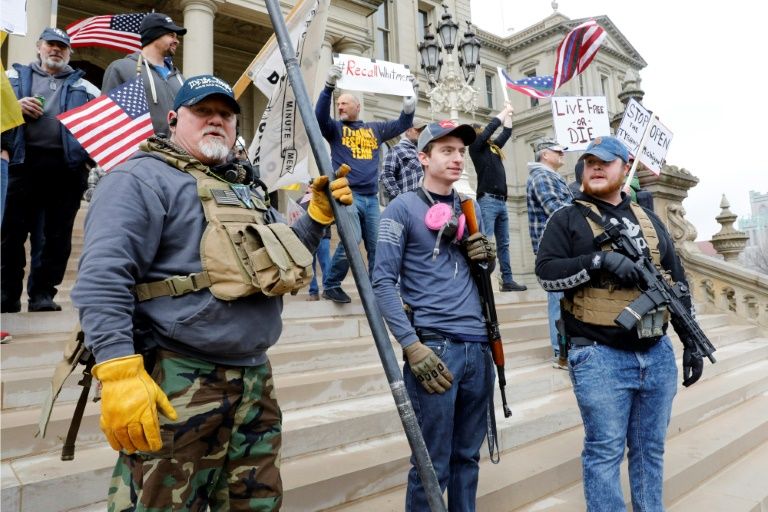 Coronavirus deaths have surged past 150,000 worldwide with nearly a quarter of them in the United States, where new rallies against lockdown orders are being held after President Donald Trump lent his support to the protesters.

Evidence is mounting that social distancing successfully slowed the pandemic after more than half of humanity — 4.5 billion people — were confined to their homes.

Governments around the world are now grappling with when and how to ease lockdowns that have crippled the global economy, even as the COVID-19 death toll climbs further in hard-hit countries.

Demonstrators in three US states staged rallies this week to demand an end to the restrictions, with the largest protest in Michigan attracting 3,000 people — some of whom were armed.

Trump has largely left decisions on easing lockdowns to state officials even as he laid out guidelines for a staged reopening of the national economy.

But his call to “liberate” Michigan, Minnesota and Virginia in a series of tweets Friday were rebuked by the Democratic leaders of all three states.

“I do not have time to involve myself in Twitter wars,” said Virginia governor Ralph Northam.

The United States accounts for nearly a third of the 2.25 million coronavirus infections reported globally.

It has also recorded over 37,000 deaths, more than any other nation, followed by Italy, Spain and France which have all been ravaged by their own outbreaks.

Many countries are testing only the most serious cases and the number of confirmed infections is likely to be only a fraction of the true total.

Virtually no corner of the world has been left untouched, with deaths in Africa passing 1,000.

Nigeria announced the death of President Muhammadu Buhari’s top aide, the highest-profile person to succumb to the virus in Africa’s most populous nation.

Meanwhile, many of the world’s 260 million Orthodox Christians are preparing to mark Easter without attending church services.

The Russian Orthodox Church has asked the faithful to celebrate at home, even though many places or worship will remain open. Services in Turkey will be closed to the public and broadcast on the internet.

In Zimbabwe, mass rallies and military parades to mark the country’s 40th anniversary of independence from British colonial rule were cancelled.

And Buckingham Palace announced that Queen Elizabeth II will not mark her birthday on Tuesday with a traditional gun salute.

Britain’s overall death toll is officially almost 15,500, but a charity says the number of virus deaths in care homes alone could be as high as 7,500, five times more than estimated.

China’s death toll jumped to 4,632 on Friday after it raised by 50 percent the number of fatalities for the city of Wuhan, where the respiratory disease first emerged late last year.

Trump, who has angrily shot back at claims he reacted too slowly to the virus threat, has accused Beijing of downplaying the impact of the disease within its borders.

Trump did not offer evidence to back his claim, but pressure has mounted on Beijing to come clean over its handling of the initial outbreak.

Leaders in France and Britain have also questioned China’s management of the crisis but Beijing hit back, saying it had not concealed information about the illness.

Signs that the outbreak could be easing in parts of Europe prompted Switzerland, Denmark and Finland to begin reopening shops and schools this week.

Germany’s health minister said Friday that the virus was “under control” after 3,400 deaths, and the country is now beginning the delicate task of lifting some restrictions without triggering a secondary outbreak.

Some shops will be allowed to reopen Monday, and some children will return to school within weeks.

Parts of Italy began emerging from lockdown too, with Venice residents strolling around quiet canals.

Iran also allowed some Tehran businesses to reopen Saturday despite the Middle East’s deadliest outbreak, as many faced a bitter choice between risking infection and economic ruin.

“How can I stay keep staying home? My family is hungry,” said Hamdollah Mahmoudi, 45, a shopworker in Tehran’s Grand Bazaar.

“And one gets mentally sick without work.”

But Spain, where the death toll topped 20,000, has extended its strict lockdown, while Japan, Britain and Mexico have all expanded their current movement restrictions.

Signs of the economic carnage wrought by the pandemic are mounting, with China reporting its first GDP contraction since at least the early 1990s after several decades of breakneck growth.

The Trump administration pledged another $19 billion in relief for farmers reeling from a massive jolt to agricultural markets with schools and restaurants shuttered across the country.

Part of the funds will be used to buy up surplus dairy products and produce that farmers have been destroying, unable to get it to consumers or food processors.

“Having to dump milk and plow under vegetables ready to market is not only financially distressing, but it’s heartbreaking as well to those who produce them,” Agriculture Secretary Sonny Perdue said.

African state leaders and global financial bodies warned Friday that the continent needed tens of billions of dollars in additional funds to fight the outbreak.

The IMF also warned the virus could spark another “lost decade” in Latin America and backed debt moratoriums for the region’s fragile economies.

Spain’s coronavirus death toll slows, with lowest increase in about a month