The Times of Earth, International Edition
0
806 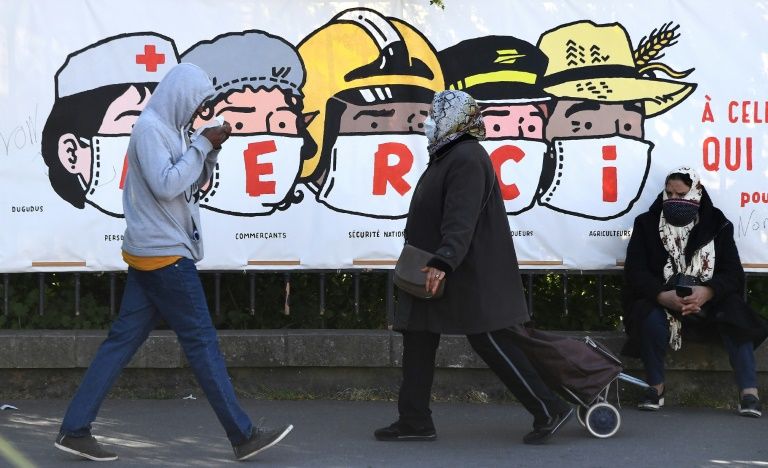 The coronavirus is poised to spark a bruising global recession not seen in a century, the IMF warned Tuesday, as countries considered lifting sweeping lockdowns that have crippled economies and kept billions confined to their homes.

The deadly pandemic has already killed more than 120,000 people and infected close to two million around the world since it first emerged in China late last year.

It has upended lives from New York to New Delhi to Naples as governments imposed unprecedented lockdown measures to contain the virus’s devastating march, sparking fears of tipping the world economy into a slump not seen since the Great Depression.

But with deaths and infections possibly starting to plateau in some of the hardest-hit countries, debate is mounting about when — and how — to lift lockdown measures that have kept half of humanity hemmed into their homes for weeks on end.-

Austria and Italy allowed some shops to reopen on Tuesday, a day after Spain allowed construction and factory workers to return to their jobs.

In the US, President Donald Trump said numbers were levelling off and the White House was set to unveil a team Tuesday tasked with reopening the economy.

But the picture was patchy across the globe.

France extended its nationwide stay-at-home orders for another month, while some shops in Italy refused to reopen despite the greenlight from the central government, fearing a resurgence of the virus.

Meanwhile, India extended confinement orders for its 1.3 billion people until at least May 3, a move some fear could further devastate an already battered economy.

Dire economic warnings poured in on Tuesday, with the International Monetary Fund predicting the worst global downturn in a century.

It said the global economy is expected to shrink by three percent this year and predicted a 7.5-percent dive for eurozone growth.

The US economy, the world’s biggest, is expected to contract by 5.9 percent.

“Much worse growth outcomes are possible and maybe even likely,” according to the IMF’s latest World Economic Outlook.

“If the pandemic and containment measures last longer, emerging and developing economies are even more severely hit,” it warned, calling the global downturn “The Great Lockdown”.

But if the virus is contained and economies can begin operating again, 2021 should see a rebound of 5.8 percent, it added.

France on Tuesday said its economy was expected to shrink by eight percent, worse than previous projections, while in Britain the Office for Budget Responsibility fiscal watchdog said GDP could plummet by 13 percent.

But some countries showed signs of setting off on the long road back to normalcy.

A shopping district in Vienna drew mask-clad shoppers after the government allowed some small stores as well as hardware and gardening shops to reopen across Austria, which has been spared the worst of the virus.

Social distancing rules remained in place, however: queues were staggered and one tobacco shop only served customers on the street, while an optician asked customers to ring a bell to enter his store.

“I just hope by God that it’s not too early” to ease the lockdown, she added.

Badly affected Spain on Monday allowed construction and factory employees back to work, and police handed out face masks in Madrid metro stations.

Italy’s government said bookshops, launderettes and stationery and kid’s clothing stores were allowed to reopen, but regional authorities in some hard-hit northern regions refused to adhere.

It “is absurd” to allow shops to reopen, said Piedmont president, Alberto Cirio.

“I’m working on keeping people at home,” he added. “Maintaining discipline is the only way not to waste the sacrifices made up until now.”

In other regions some shops did reopen though, with vendors wearing face masks and gloves and offering hand sanitiser to customers.

Italy’s death toll is now above 20,000 — second worst after the US — but deaths and infections have eased off.

Denmark planned to open some of its schools on Wednesday after a month-long shutdown.

In Washington, Trump said US numbers could be steadying as 1,509 new daily deaths were reported Monday — almost identical to the previous day.

The toll in badly hit New York, where the virus has killed more than 10,000 people — almost half of the US total — climbed again Tuesday with 778 new fatalities.

But new hospital admissions and infections were down and governor Andrew Cuomo offered a glimmer of hope.

“We are changing the curve, every day. We’ve shown that we control the virus, the virus doesn’t control us,” Cuomo said.

He had earlier predicted the worst of the outbreak was over, adding “I believe we can now start on the path to normalcy”, signalling a gradual reopening of the economy.

In France, one of Europe’s worst-hit countries, President Emmanuel Macron said in a televised address Monday night the epidemic there was “beginning to steady… hope is returning”.

And in Britain, where Prime Minister Boris Johnson is recovering after a week in hospital with the virus, officials warned the peak was still to come and the lockdown there was likely to continue.

There were cautionary tales that the virus is not easily defeated.

In China, where the outbreak first reared its head and the government says it has largely curbed the spread of the virus, officials announced scores of new imported infections.

US halts funding to World Health Organisation amid coronavirus pandemic