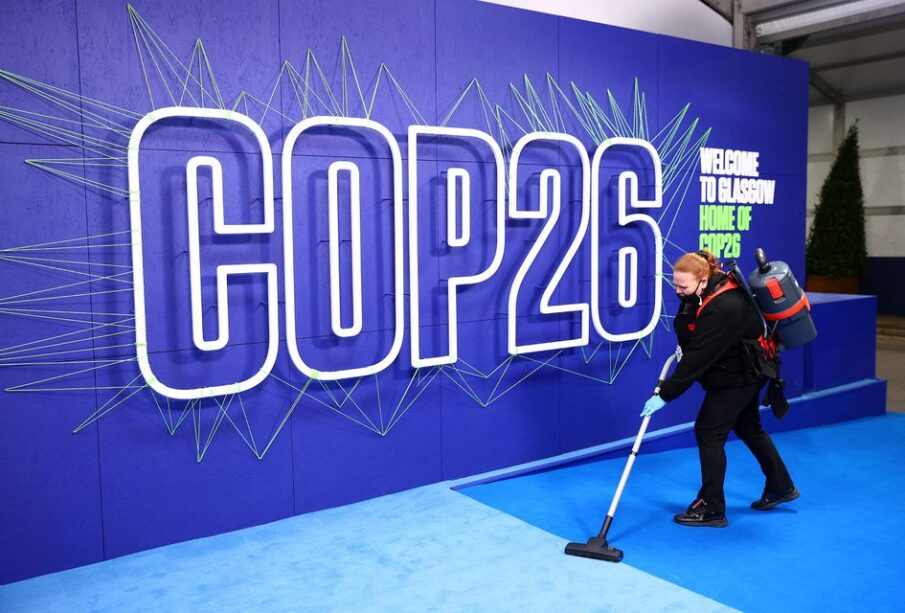 An employee cleans before the arrival of leaders for the UN Climate Change Conference (COP26) in Glasgow, Scotland, Britain November 1, 2021. Adrian Dennis/Pool via REUTERS

A U.N. conference seen critical to averting the most disastrous effects of climate change launches amid acrimony on Monday after major industrialised nations were accused of dragging their feet on ambitious new commitments.

The COP26 conference in the Scottish city of Glasgow comes a day after G20 big economies failed to commit to a 2050 deadline for halting net carbon emissions – a mark widely cited as a condition for preventing the most extreme global warming.

Instead, their talks in Rome only recognised “the key relevance” of halting net emissions “by or around mid-century”, set no timetable for phasing out coal at home and watered down promises to cut emissions of methane, another greenhouse gas.

“As citizens across the planet, we urge you to face up to the climate emergency. Not next year. Not next month. Now,” Swedish activist Greta Thunberg tweeted, asking her millions of followers to sign an open letter accusing leaders of betrayal.

Many of those leaders will take to the stage in Glasgow on Monday to defend their climate change records and in some cases make new pledges at the start of two weeks of negotiations that conference host Britain is billing as make-or-break.

“If we are going to prevent COP26 from being a failure, then that must change, and I must be clear that if Glasgow fails then the whole thing fails,” British Prime Minister Boris Johnson told reporters.

But the level of acrimony among some of the world’s biggest emitters will not make the task any easier. U.S. President Joe Biden singled out China and Russia for criticism for not bringing proposals to the table.

“The disappointment relates to the fact that Russia and … China basically didn’t show up in terms of any commitments to deal with climate change,” Biden, who faces domestic resistance to his climate ambitions, told reporters at the G20.

Chinese President Xi Jinping will address the conference on Monday in a written statement, according to an official schedule. read more

Delayed by a year because of the COVID-19 pandemic, COP26 aims to keep alive a target of capping global warming at 1.5C above pre-industrial levels – a level scientists say would avoid its most destructive consequences.

To do that, the conference needs to secure more ambitious pledges to reduce emissions, lock in billions in climate-related financing, and finish the rules to implement the 2015 Paris Agreement, signed by nearly 200 countries.

COVID-19 will make this U.N. climate conference different from any other, as 25,000 delegates must wear masks, socially distance and test negative for COVID-19 each day.

Two days of speeches by world leaders starting Monday will be followed by technical negotiations. Any deal is likely to be struck hours or even days after the event’s Nov. 12 finish date.