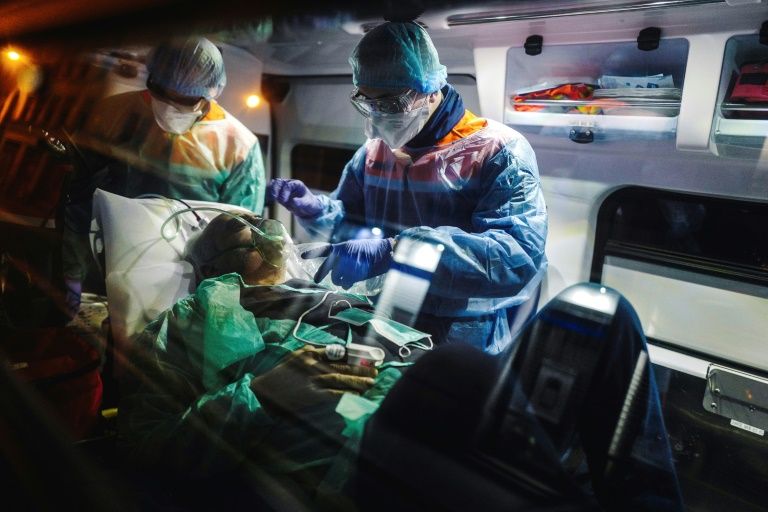 European leaders battling a deadly coronavirus outbreak are facing the “biggest test” to their union, Germany’s leader said Monday, as the United States braced for what authorities warned would be its hardest week in living memory.

As France bluntly warned that it faces the deepest recession since World War II, Germany’s Chancellor Angela Merkel called for European nations to work together to rebuild from the deadly pandemic gripping the continent.

Japan announced an imminent state of emergency and a trillion-dollar stimulus package, while the United States prepared to cross the 10,000 death mark and its top doctor compared the likely impact of the outbreak in the week ahead to 9/11 or Pearl Harbor.

More than 70,000 people have now died worldwide, some 50,000 of them in Europe. The daily toll has begun to drop in hard-hit Spain and France, but is still accelerating in America.-

Merkel called for strength in the face of the grinding crisis.

“In my view… the European Union stands before the biggest test since its founding,” Merkel warned, a day ahead of a key eurozone finance ministers’ conference to agree an economic rescue plan for the bloc.

“Everyone is just as affected as the other, and therefore, it is in everyone’s interest, and it is in Germany’s interest for Europe to emerge strong from this test,” she said, following criticism from harder-hit partners.

Italy, France and Spain have implored Germany, Austria and the Netherlands for common debt facilities to cushion the economic impact of the virus.

But leaders from the richer northern nations have resisted the calls — with Germany and the Netherlands in the lead — fearing their taxpayers will be left to foot the bill.

In terms of Europe’s frontline health response, some countries already ravaged by COVID-19 outbreaks reported lower numbers of new infections and deaths, offering a glimmer of hope the worst may have passed.

Norway said Monday the epidemic was under control and Austria began thinking about easing its lockdown.

But the death toll topped 5,000 in Britain after more than 400 new fatalities were reported Monday.

In London, Prime Minister Boris Johnson remained in hospital but said he was in “good spirits” after he was admitted Sunday for tests for “persistent” coronavirus symptoms.

Officials said the leader, who was diagnosed with the virus 10 days ago, remained in day-to-day control of the British government.

The pandemic has reached almost every corner of the planet, confining nearly half of humanity to their homes and turning life upside down for more than four billion people, according to an AFP tally of populations under some form of lockdown.

The worldwide number of fatalities from the novel coronavirus rose to more than 70,000 on Monday and more than 1.2 million declared cases have now been registered around the world since the outbreak first emerged in China in December.

About three quarters of all deaths have been recorded in Europe, and the US now has the most declared cases of any country — along with a steadily rising death toll.

“This is going to be the hardest and the saddest week of most Americans’ lives, quite frankly,” US Surgeon General Jerome Adams told Fox News.

In Tokyo, Prime Minister Shinzo Abe said hospitals in Japan face a “critical situation” and that an emergency could be declared as early as Tuesday.

But there was hope in parts of Europe after France recorded its fewest dead in a week and Spain said deaths were down for a fourth straight day Monday — though it still logged 637 new fatalities.

Italy reported a jump in new fatalities Monday with 636 deaths, after a weekend that saw its lowest toll in two weeks.

Meanwhile, Australian tour company Aurora Expeditions and Uruguay officials warned that more than 80 passengers and crew aboard an Australian cruise ship off South America have tested positive for the coronavirus.

Uruguay’s public health ministry said six passengers with “life-threatening” illness had been taken off the Greg Mortimer for treatment in Montevideo.

The rest of the more than 200 passengers and crew remain stranded on the vessel anchored some 15 miles (25 kilometres) off the coast.

In India, the world’s second most populous country, a major private hospital in economic hub Mumbai was shut down after 26 nurses and three doctors tested positive, amid complaints from staff that they had been told to work without adequate safety gear.

“Three hundred staffers have been quarantined and the hospital is shut,” he said.

India has so far recorded 4,000 coronavirus cases among a population of 1.3 billion, but experts warn true the real number is likely to be far higher, with the country carrying out little testing.