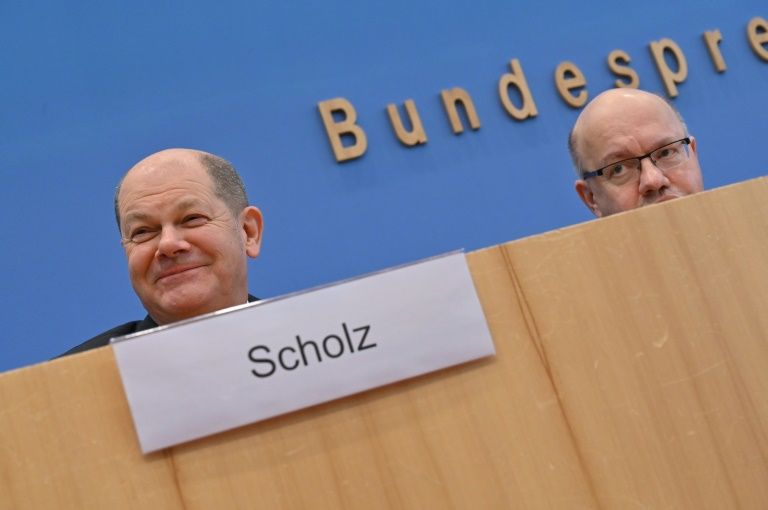 The German government on Friday unleashed the biggest economic aid package in the country’s post-war history, offering companies “unlimited” credit to keep them afloat during the coronavirus crisis.

Chancellor Angela Merkel said the measures “are unprecedented in the history of the German government”, and repeated that Berlin would do “whatever is necessary” to tackle the fallout from the pandemic.

Finance Minister Olaf Scholz described the rescue measures as the equivalent of bringing “a bazooka” to the economic fightback against the virus.

“There is no upper limit to the credit offered by (state-owned development bank) KfW, that’s the most important message,” said Scholz as he unveiled the measures.-

Some 550 billion euros ($614 billion) in government-backed loans that was announced is just “for starters”, said Economy Minister Peter Altmaier at the same press conference.

“We promised that we will not fail because of a lack of money and political will. This means that no healthy company, no job should find themselves in trouble,” he said.

“We will reload our weapons if necessary,” added Altmaier.

The ministers also signalled that Berlin has enough funds in its treasury for a long battle.

“If it lasts longer, we can go on longer,” said Scholz.

The message to companies is that: “You can be courageous, the risks will be carried by us,” he said.

The package, even in its first stage, is bigger than the 500 billion-euro help offered by the German government during the 2008 financial crisis.

Merkel had on Wednesday already vowed to do what it takes to tame the coronavirus crisis, signalling she was even ready to suspend the cherished dogma of keeping Germany’s budget balanced.

Germany has now recorded over 2,300 cases of the coronavirus and seven people have died, according to the latest tally by DPA news agency.

As concern grows, Germany’s regional states have one by one announced that schools, daycare centres and kindergartens would be closed from Monday.

Among them were Germany’s most populous state of North Rhine-Westphalia, home to some 18 million people, as well Bavaria, Baden-Wuerttemberg, Hesse and Berlin.

Merkel urged Germans to “show solidarity by keeping their distance from each other” in order to protect the elderly and the most vulnerable.

Merkel’s government has in recent days ramped up its response to fight not only the virus but also the impact of the contagion.

Germany is rushing through new regulations to allow more employees forced into shorter working hours to qualify for compensation.

The government had also already agreed to boost investments by 3.1 billion euros per year between 2021 and 2024.

The hike in investments totalling 12.4 billion euros will be entirely funded by 2019’s budget surplus, the coalition had announced on Monday after overnight talks.

Deka Bank chief economist Ulrich Kater said Friday’s guarantee package is a “whatever it takes from the government”.

“Like how the ECB acted correctly during the eurozone crisis, the government is now doing the same in the corona crisis,” he noted, saying that the measures to help small and medium-sized companies in particular through the crisis are “absolutely sensible”.

“This is just the news that can stop the downward spiral.”