The Times of Earth, International Edition
0
1344 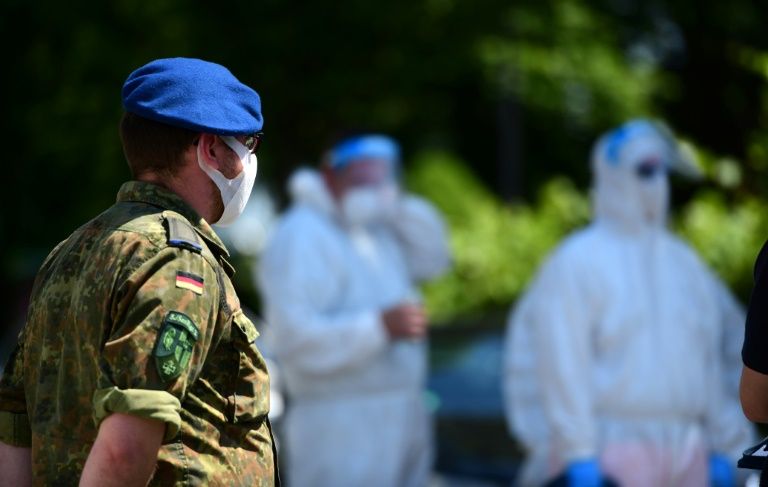 An outbreak in a slaughterhouse in the German district of Guetersloh has infected more than 1,500 workers (AFP Photo/Ina FASSBENDER)

Germany became the latest country to reimpose lockdown measures to tackle a coronavirus cluster on Tuesday, as tennis star Novak Djokovic contracted the disease and apologised for hosting an event after which three other players also tested positive.

Doubts still swirl about the possibility of holding large-scale sporting events or other mass gatherings — Saudi Arabia announcing just 1,000 people will be allowed to hajj pilgrimage this year, a fraction of the 2.5 million pilgrims last year.

“I’ve been preparing for years. But what can I do? This is Allah’s will — it’s destiny,” said Kamariah Yahya, 68, from Indonesia.

Scientists are still grappling with the basics of the virus but there were glimmers of hope on Tuesday — South Africa announcing it was launching a trial of a potential vaccine being developed in Britain.

However, the economic news was grim, with a tranche of new data from the World Trade Organization (WTO) suggesting global trade faced its biggest quarterly slide on record this quarter after being battered by lockdowns that have left tens of millions unemployed and trashed entire industries.

Virus cases have now surpassed nine million worldwide, with the Americas under the cosh — the United States is still the worst-hit nation, followed by Brazil.

US President Donald Trump, however, continues to take a different path from most other leaders.

He caused outrage on Saturday by claiming he had asked officials to slow down the rate of testing to reduce the number of infections publicly reported.

But his claim was contradicted on Tuesday by the government’s top infectious disease expert, Anthony Fauci, who told Congress “none of us have ever been told to slow down on testing”.

“In fact, we will be doing more testing,” he said.

Europe has been steadily easing lockdowns and travel restrictions as death rates and infections have stabilised.

England is the latest country to announce a major easing of measures with pubs, restaurants, hotels and hairdressers allowed to reopen from July 4.

Tennis was hoping to follow team sports like football back into arenas and stadiums, but Djokovic’s positive test has dampened its prospects.

The Serb confirmed he had contracted the illness after an exhibition tournament he hosted, apologising to three other players who also tested positive following the event.

“I am so deeply sorry our tournament has caused harm,” the 17-time Grand Slam champion wrote on Twitter.

Illustrating the uncertainty felt throughout Europe, Germany was forced to impose a lockdown on a whole district for the first time since it eased its restrictions — 360,000 people in Guetersloh in the northwest are now locked down.

The move followed an outbreak in a slaughterhouse that has infected more than 1,500 workers.

“I had actually expected this much earlier,” said Guetersloh resident Ullrich Wegner of the lockdown.

COVID-19 outbreaks at abattoirs in Germany and France have put a spotlight on the harsh conditions facing the workers — many of whom come from Romania or Bulgaria.

Portugal also imposed new restrictions in and around its capital Lisbon on Tuesday while China and Japan also battle isolated outbreaks — underscoring the lingering potency of the virus.

The extent of the economic damage wrought by the virus and lockdowns was highlighted Tuesday by the WTO, which predicted that global trade would drop by about 18.5 percent in the second quarter.

WTO director-general Roberto Azevedo said the slide would be the steepest on record, but that it could have been much worse.

The WTO nevertheless cautioned that the outlook for the global economy over the next two years remained “highly uncertain”.

Auto sales in Europe this year will also tumble by a record 25 percent, the pandemic having left manufacturers facing a “major economic crisis”, the European Automobile Manufacturers’ Association (ACEA) said.

The car industry faces huge challenges across with world, with British industry bodies saying on Tuesday it could shed up to 25,000 posts because of the virus.

In the absence of a vaccine, the WHO has called for a rapid increase in production of the steroid dexamethasone, which has been shown to have life-saving potential for treating the most severe cases.

South Africa announced it would begin the continent’s first trial of a vaccine, signing up 2,000 people to test ChAdOx1 nCoV 19, which is being developed by the Oxford Jenner Institute.

The drug is already being evaluated in Britain and another pilot scheme is due to take place in Brazil.

“As we enter winter in South Africa and pressure increases on public hospitals, now more than ever we need a vaccine to prevent infection by COVID-19,” said University of Witwatersrand vaccinology professor Shabir Madhi.

The trial was a “landmark moment”, he said.