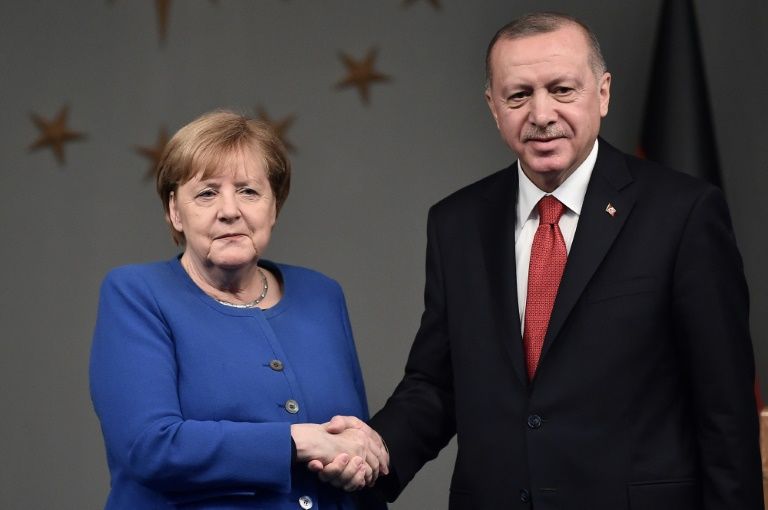 Germany’s Chancellor Angela Merkel and Turkish President Recep Tayyip Erdogan called Friday for the fragile truce in Libya to be turned into a lasting ceasefire, during a visit by the German leader to Istanbul.

Erdogan warned the conflict in Libya risked “chaos (that) will affect all the Mediterranean basin”.

“Efforts need to be made to turn the fragile truce into a solid and permanent ceasefire,” Merkel said at a joint press conference.

Eastern Libyan forces under strongman Khalifa Haftar have been battling since April to seize Tripoli from the UN-recognised Government of National Accord, which is supported by Turkey.-

“I hope the Haftar side will take positive steps,” Merkel said.

World powers have stepped up efforts in recent weeks to find a political solution, but rocket attacks on Tripoli’s airport this week threatened resumed fighting.

Erdogan accused Haftar of showing “no intention for reconciliation” and criticised his failure to sign the ceasefire document during an international conference in Berlin on Sunday.

“Haftar has not signed it but only verbally accepted it,” said Erdogan. “We do not see this as full acceptance.”

Erdogan and Merkel also inaugurated a new campus for the Turkish-German University in Istanbul, which opens at a time of warming relations between the two countries.

Merkel described it as “an extraordinary example of cooperation between Turkey and Germany”.

The global spread of the coronavirus: Where is it?