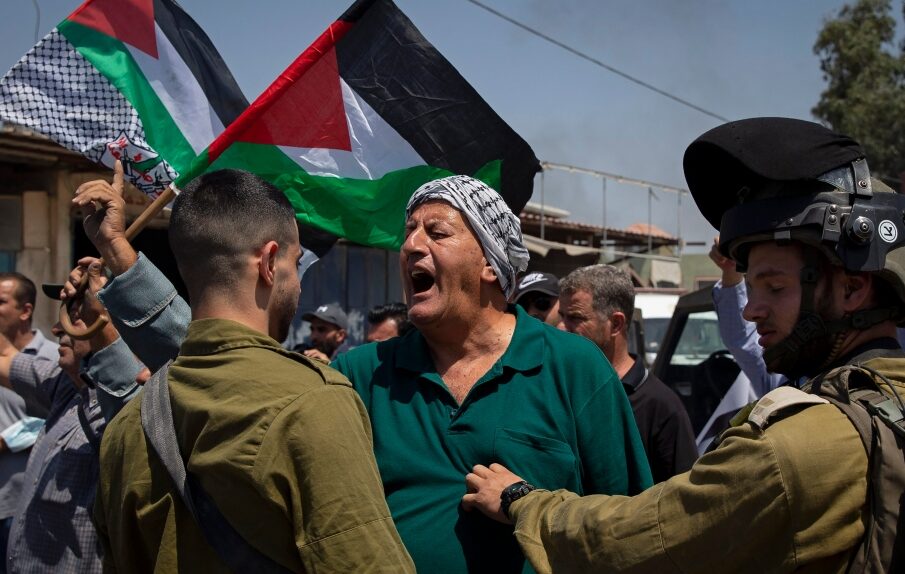 A Palestinian argues with Israeli soldiers during a protest against the creation of a new road for Israeli settlers, near the Palestinian village of Beita, north of the West Bank city of Nablus, Wednesday, Aug. 25, 2021. (AP Photo/Majdi Mohammed)

Hundreds of Palestinians on Wednesday demonstrated near the Israeli border in the southern Gaza Strip, calling on Israel to ease a crippling blockade days after a similar gathering ended in deadly clashes with the Israeli army.

The demonstration wrapped up without a repeat of Saturday’s intense clashes after Hamas kept the crowds from approaching the separation wall.

Egypt, which has been trying to broker a long-term cease-fire between the enemy sides, had appealed to the Islamic militant group to calm things down. Shortly after the demonstration ended, Hamas officials announced that the territory’s key border crossing with Egypt was partially reopening on Thursday.

The Israeli military, which had beefed up its forces ahead of the demonstration, said it used tear gas and limited live fire to disperse the crowd. Palestinian medics reported at least 14 people were wounded, including five people who suffered gunshots. None of the injuries were believed to be life-threatening.

Soheil al-Hendi, a Hamas official, said the group had made a “great effort” to avoid bloodshed.

“The enemy must understand this message that we do not want to repeat what happened last Saturday when blood was spilled,” he said.

Hamas’ Al-Aqsa TV showed crowds of people approaching the fence, then running away when an Israeli military vehicle arrived. Tear gas could be seen floating in the wind. The military said it had used .22 caliber gunfire, a type of weapon that is meant to be less lethal than more powerful firearms but can still be deadly.

During Saturday’s demonstration, hundreds of participants stormed the fence, some of them throwing explosives, resulting in violent clashes.

An Israeli soldier was critically wounded when a Palestinian militant shot him in the head through a hole in the wall at point-blank range, while over 40 Palestinians were wounded by Israeli fire. One of the wounded, Osama Dueji, died of his wounds Wednesday. Hamas identified him as a member of its armed wing.

Lt. Col. Amnon Shefler, an Israeli military spokesman, said that demonstrators on Saturday fired weapons and lobbed explosives at soldiers and tried to tear down the fence.

“They are presenting riots as peaceful,” he said. “In reality, these riots are extremely violent.” He declined to say how many troops had been mobilized on Wednesday but said the number was much larger than on Saturday and included riot-control forces.

Hamas has organized the protests in an attempt to put pressure on Israel to ease its blockade of Gaza.

Israel and Egypt have maintained the blockade since Hamas, a militant group that opposes Israel’s existence, took control of Gaza in 2007, a year after winning a Palestinian election. The blockade has devastated Gaza’s economy and fueled an unemployment rate hovering around 50%. Israel says the blockade, which tightly restricts the movement of goods and people in and out of Gaza, is needed to prevent Hamas from building up its military capabilities.

Israel and Hamas have fought four wars and numerous skirmishes since 2007, most recently an 11-day battle in May that killed 260 Palestinians and 13 people in Israel.

Hamas accuses Israel of violating the cease-fire that ended the fighting by tightening the blockade. In particular, it has restricted the entry of materials needed for reconstruction. Israel has demanded the return of the remains of two soldiers killed in a 2014 war, as well as the return of two Israeli civilians believed to be in Hamas captivity.

Last week, Israel reached an agreement with Qatar to allow the Gulf country to resume aid payments to thousands of impoverished Gaza families.

Under the new system, the payments will be delivered by the United Nations directly to families that have been vetted by Israel. In the past, the aid was delivered as cash straight to Hamas.

The payments are expected to begin in the coming weeks, providing some relief in Gaza.

But tensions remain high. In addition to the demonstrations, Hamas has allowed its supporters to launch incendiary balloons across the border, setting off a number of wildfires in southern Israel. Israel has responded with a series of airstrikes on Hamas targets in Gaza.

Egypt, which serves as a mediator between Israel and Hamas, has been working to broker a longer-term truce between the bitter enemies.

This week, Egypt closed its border crossing with Gaza, the main exit point for the territory’s people to travel abroad, in a show of frustration with Hamas.

Hamas’ Interior Ministry announced that it had been told by Egypt that the Rafah crossing would reopen on Thursday to allow Gazans to return. Outgoing traffic will still not be allowed, it said. Egyptian officials did not immediately confirm the news.

But earlier, an Egyptian official, speaking on condition of anonymity because he was not authorized to talk to the media, confirmed his government had held extensive communications with all sides.

He said Egypt had asked Hamas to calm things down and for Israel to begin easing the blockade and accelerating the Qatari payments.

Gunman kills four in attack near French embassy in Tanzania