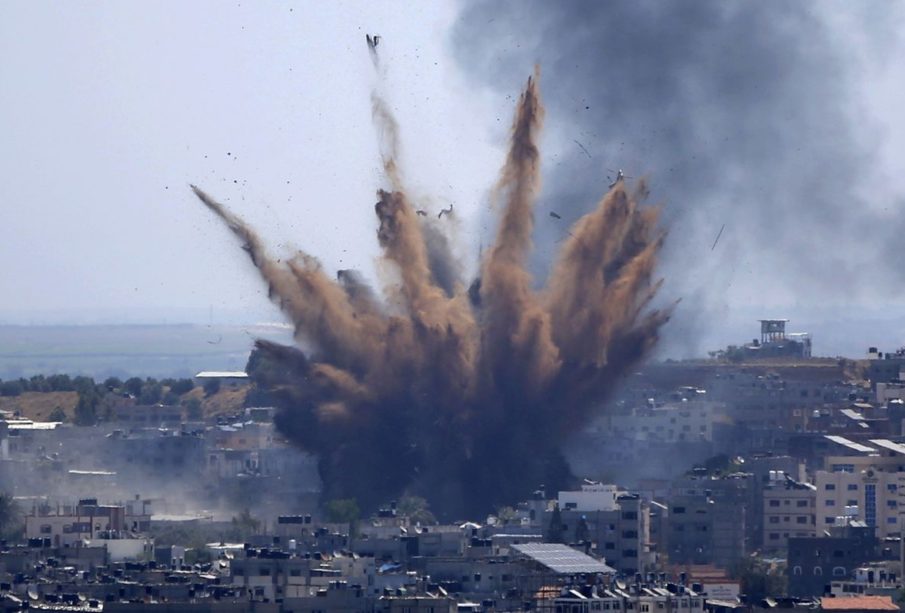 Palestinian militants fired more rockets into Israel’s commercial heartland on Thursday as Israel kept up a punishing bombing campaign in the Gaza Strip and massed tanks and troops on the enclave’s border.

Violence has also spread to mixed communities of Jews and Arabs in Israel, a new front in the long conflict. Synagogues were attacked and fighting broke out on the streets of some towns, prompting Israel’s president to warn of civil war.

At least 103 people have been killed in Gaza, including 27 children, over the past four days, Palestinian medical officials said. On Thursday alone, 49 Palestinians were killed in the enclave, the highest single-day figure since Monday.

Seven people have been killed in Israel: a soldier patrolling the Gaza border, five Israeli civilians, including two children, and an Indian worker, Israeli authorities said.

Worried that the region’s worst hostilities in years could spiral out of control, the United States was sending in an envoy, Hady Amr. Truce efforts by Egypt, Qatar and the United Nations had yet to deliver a sign of progress.

U.S. President Joe Biden called on Thursday for a de-escalation of the violence, saying he wanted to see a significant reduction in rocket attacks.

Militants fired rocket salvoes at Tel Aviv and surrounding towns with the Iron Dome anti-missile system intercepting many of them. Communities near the Gaza border and the southern desert city of Beersheba were also targeted.

Five Israelis were wounded by a rocket that hit a building near Tel Aviv on Thursday.

Three rockets were also fired from Lebanon towards Israel but landed in the Mediterranean Sea, the military said. It appeared to be a show of solidarity with Gaza by Palestinian groups in Lebanon rather than the start of any offensive.

In Gaza, Israeli warplanes struck a six-storey residential building that it said belonged to Hamas. Netanyahu said Israel has struck a total of close to 1,000 militant targets in the territory.

Israeli aircraft also attacked a Hamas intelligence headquarters and four apartments belonging to senior commanders from the group, the military said, adding that the homes were used for planning and directing strikes on Israel.

Diplomats said the United States, a close ally of Israel, objected to a request by China, Norway and Tunisia for a public, virtual meeting of the U.N. Security Council on Friday to discuss the violence.

U.S. Secretary of State Antony Blinken told reporters such a meeting would be better next week to allow time for diplomacy in hopes of achieving a de-escalation.

Standing beside a Gaza road damaged in Israeli air strikes, Assad Karam, 20, a construction worker, said: “We are facing Israel and COVID-19. We are in between two enemies.”

In Tel Aviv, Yishai Levy, an Israeli singer, pointed at shrapnel that came down on a sidewalk outside his home.

“I want to tell Israeli soldiers and the government, don’t stop until you finish the job,” he said on YNet television.

Israel launched its offensive after Hamas fired rockets at Jerusalem and Tel Aviv in retaliation for Israeli police clashes with Palestinians near al-Aqsa mosque in East Jerusalem during the Muslim fasting month of Ramadan.

A number of foreign airlines have cancelled flights to Israel because of the unrest.

Brigadier-General Hidai Zilberman, the Israeli military’s chief spokesman, said attacks on militants’ rocket production and launching sites were “disrupting Hamas’ activities”, but still not to the point of stopping the barrages.

“It is more difficult for them, but we have to say in fairness that Hamas is an organised group, one that has the capability to continue to fire for several more days at the places it has been targeting in Israel,” he said on Israeli Channel 12 TV.

He said between 80 and 90 militants had been killed in Israeli attacks.

Zilberman said Israel was “building up forces on the Gaza border”, a deployment that has raised speculation about a possible ground invasion, a move that would recall similar incursions during Israel-Gaza wars in 2014 and in 2009.

Israeli military affairs correspondents, who are briefed regularly by the armed forces, have said however that a major ground operation is unlikely, citing high casualties among the risks.

“Mass up as you wish, from the sea, land and sky. We have prepared for your kinds of deaths that would make you curse yourselves,” he said.

So far some 1,750 rockets have been fired at Israel, of which 300 fell short in the Gaza Strip, the Israeli military said.

The U.N. agency for Palestinian refugees, UNRWA, said two of its schools were hit on Tuesday and Wednesday “within the context of air strikes by Israel”, and that at least 29 classrooms were damaged.

School is in recess in Gaza, and classes have also been suspended in many parts of Israel, including in one town where an empty school was hit by a rocket on Tuesday.

The hostilities have fuelled tension between Israeli Jews and the country’s 21% Arab minority who live alongside them in some communities.

Jewish and Arab groups attacked people and damaged shops, hotels and cars overnight. In Bat Yam, south of Tel Aviv, dozens of Jews beat and kicked a man thought to be an Arab as he lay on the ground.

One person was shot and badly wounded by Arabs in the town of Lod, where authorities imposed a curfew, and over 150 arrests were made in Lod and Arab towns in northern Israel, police said.

Israeli President Reuven Rivlin called for an end to “this madness”.

Although the latest unrest in Jerusalem was the immediate trigger for hostilities, Palestinians are frustrated by setbacks to their aspirations for an independent state in recent years, including Washington’s recognition of disputed Jerusalem as Israel’s capital.

On the Israeli political front, Netanyahu’s chances to remain in power after an inconclusive March 23 election appeared to improve significantly after his main rival, centrist Yair Lapid, suffered a major setback in efforts to form a government.

Fully vaccinated Americans can return to life without masks