The Times of Earth, International Edition
0
874 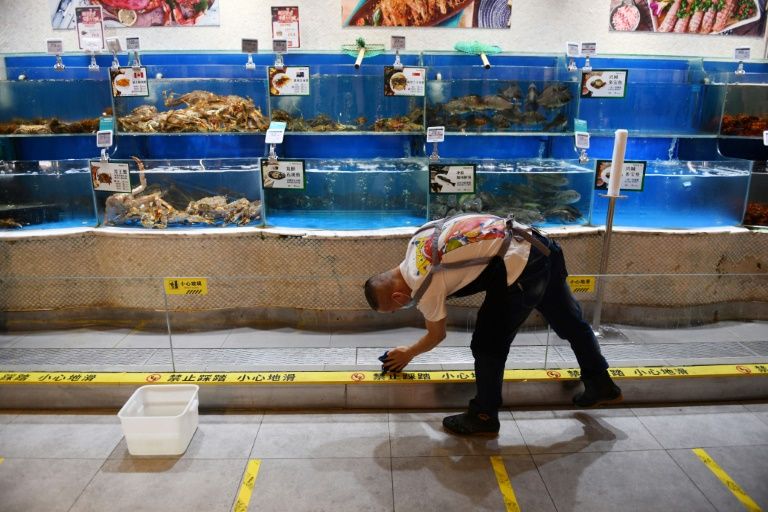 A worker cleans glass in the seafood section of a supermarket in Beijing, where a fresh coronavirus outbreak is keeping customers away (AFP Photo/GREG BAKER)

A fresh coronavirus outbreak in Beijing has hampered the Chinese capital’s hesitant return to normality, rekindling fears for the economy as some businesses grind to a halt and consumers stay away.

City authorities have locked down entire residential areas, imposed a partial travel ban and advised companies to let employees work from home after a cluster of cases emerged last week at a wholesale food market.

After struggling through months of closures during the epidemic, many businesses in the service industry have once again been forced to close their doors or reintroduce restrictions.

An outlet of gym chain Break Fitness, in the hard-hit Fengtai district, temporarily shut on Friday after reopening for around a month, with staff undergoing COVID-19 tests.

Store manager Xiao Tianwei said the firm — like many others nearby — was awaiting instructions on reopening.

Some workers have been hit especially hard. Zhang Tong, a personal trainer at another gym, Sculpture Fitness, went largely without income for almost six months.

“Even after we resumed business, I went back for only a couple of days. There aren’t many people,” he said. “Without classes you don’t receive any salary… The impact is very big.”

Restrictions are spreading beyond the worst-hit districts, with bars in Beijing’s popular Sanlitun area receiving a notice on Tuesday night telling them to “halt operations… with reopening to be determined based on the epidemic situation”.

The notice, seen by AFP, said authorities would carry out “continuous inspection” of closed bars and deal with violators accordingly.

Staff at clothes shops said Wednesday that footfall had dropped by more than half, with one employee at a handbag store saying she had not had a single customer for two days.

A restaurant manager told AFP his earnings had fallen by around half on Sunday, adding that he expected the pause on bar operations to hit business further.

Workers at a shuttered bar were seen wrapping wire around its outdoor seats on Wednesday to prevent people from sitting down.

Preston Thomas, co-owner of restaurant The View 3912, previously had to close his restaurant for two months and said he was “still recovering”.

“We have 40 staff and we have rent to pay,” he said. “We are worried but we are going to try to stay open for as long as we can.”

Bai Xue, who works at restaurant Pinzhi Yili, said the number of customers had dropped to a third of previous levels since the recent outbreak.

“The situation is serious and people don’t want to come out,” she added.

The eatery had also stopped selling seafood and put up a notice online telling customers it had not recently sourced food from Xinfadi, the market where the new cluster emerged.

The source of the new outbreak, which has infected more than 150 people, has not been determined but the discovery of the virus on salmon chopping boards has raised concerns about the product’s safety.

With the massive Xinfadi market closed, authorities and retail platforms are scrambling to ensure food supplies to Beijing.

E-commerce giant JD.com said it had stepped up direct procurement for food such as meat and vegetables for its online business, with the current volume “three times that of the daily average”.

Delivery platform Meituan said grocery orders it handles for supermarkets in Beijing had more than tripled since last Saturday compared with a week earlier.

But sellers noted the rush to online shopping was less drastic this time than during the initial outbreak.

Yang Guifang, who runs an outlet of fresh produce store Linlizhijia, said it was limiting the number of in-store customers to ensure distance between patrons.

Another fresh food vendor, who declined to be named, said fewer people had been out shopping and meat sales had fallen as customers grow wary.