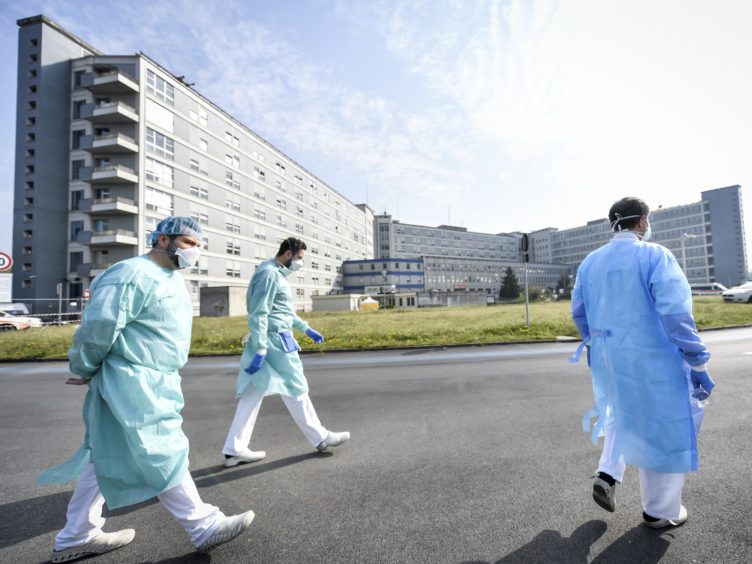 Medical staff walk at the Samaritan’s Purse field hospital that is being set up in Cremona, northern Italy, Friday, March 20, 2020. (Claudio Furlan/LaPresse via AP)

French President Emmanuel Macron is leading a push for the European Union to acquire more powers to respond in healthcare emergencies, conscious that the EU risks being blamed for the continent’s shortcomings in tackling the coronavirus outbreak.

After a decade in which Brussels has seen a debt crisis and deep internal divisions over migration, the coronavirus pandemic risks delivering an even more powerful blow to European unity, potentially pushing decades of integration into reverse.

In a videoconference with EU leaders last week, the first time all 27 have held crisis talks remotely, Macron pressed the need for Europe’s institutions to have broader powers in several areas including health, traditionally a national responsibility.

“There will undoubtedly be European initiatives to take up, and probably additional powers that need to be given to the European Union,” said a senior diplomat privy to the discussion, saying a “healthcare toolkit” was among ideas raised.

One proposal is for the creation of a scientific panel to provide unified pan-EU recommendations to member states in health crises.

Macron is also pushing for more fiscal solidarity and for the EU to be able to raise debt, something long resisted by fiscally conservative countries like Germany, the diplomat said.

Italy, now the country worst-hit by the virus worldwide, was sharply critical of France and Germany after they initially declined to provide face masks and other equipment to help handle the outbreak. Rome turned to China for help instead, though Germany has since sent 400,000 masks to Italy.

A poll by Monitor Italia last week showed 88% of Italians believe the EU has not done enough to help their country, underscoring how a lack of solidarity can hurt sentiment.

The same poll showed those who believe EU membership is a disadvantage to Italy has risen to 67% from 47% in November.

Those figures will be of concern to Germany and France, whose agreement is normally needed if policy proposals are to win pan-European backing.

“It would be devastating if by the end of this crisis, countries like Italy conclude they’ve been let down by Europe,” a source close to Macron told Reuters.

Macron has long been an advocate of deeper euro-area integration and often uses the phrase “an EU that protects”, emphasising the need for the EU to provide solutions rather than being regarded by many as a source of problems.

With German Chancellor Angela Merkel’s political career drawing to a close after 15 years at the EU helm, Macron is also staking a claim as Europe’s next torch-bearer.

Crises have in the past spurred the EU into action and led to changes in the rules, whether the bailout of member states during the sovereign debt meltdown or the shared handling of refugees during the migrant crisis.

Coronavirus piles pressure on the EU on multiple fronts at once, with the Schengen open-border agreement all but suspended, state aid and fiscal rules being relaxed, the European Central Bank launching a 750 billion euro debt facility and questions being raised about free movement and competition policy.

Alex Stubb, a former Finnish prime minister, said the outbreak was likely to prompt calls for the EU to have more powers to tackle health emergencies, and for states to take on more responsibility from the market.

“What we could see is a Europe-wide response along those lines so that member states are obliged to have some sort of reserve so that things can be done to offset the impact of the pandemic and other future shocks,” he said.

With the pandemic moving fast and national health systems across Europe under immense strain, the EU has to act faster than it usually does, and also think ahead.

Shahin Vallee, a senior fellow at the German Council on Foreign Relations, said there was still no common European containment, quarantine or testing policy.

“Many countries (including France) still test too little,” Vallee, a Frenchman, tweeted, questioning some of the steps taken at a national level.

“Less than they should and less than they can, in violation of WHO (World Health Organization) recommendations… This is critical.”

Spain to treat thousands of coronavirus patients in conference hall as toll ...