The Times of Earth, International Edition
0
409 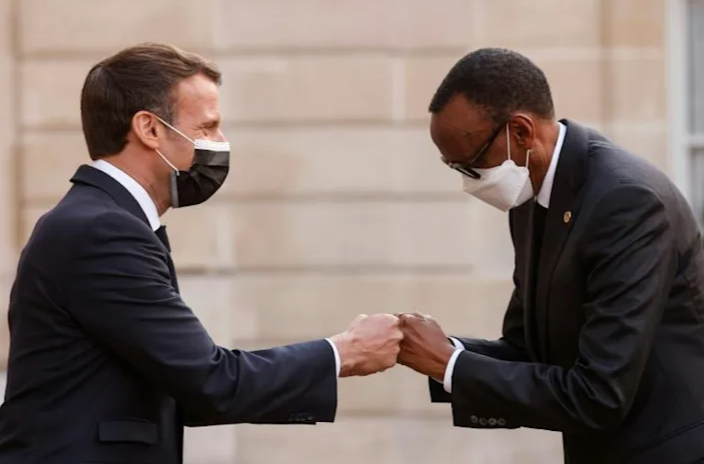 President Emmanuel Macron visits Kigali on Thursday to commemorate the victims of the 1994 Rwandan genocide. Macron is the first French leader to visit Rwanda, which has long accused France of complicity in the genocide. AFP

French President Emmanuel Macron on Thursday recognised his country’s role in the 1994 genocide in Rwanda, from backing a genocidal regime to ignoring warnings of the impending massacres.

French President Emmanuel Macron on Thursday said only Rwandans could forgive France for its role in Rwanda’s 1994 genocide.”On this path, only those who went through that night can perhaps forgive, give us the gift of forgiving,” Macron said in a speech at the genocide memorial of Gisozi in Kigali, where more than 250,000 Tutsi are buried.France did not listen to those who warned it about the impending massacre in Rwanda and stood de facto by a genocidal regime, Macron said. But France “was not an accomplice” to the genocide, Macron added.

Macron kicked off a highly symbolic visit to Rwanda after three decades of diplomatic tensions, with a tour of the Kigali Genocide Memorial, where he paid tribute to some 800,000 mostly Tutsis who were slaughtered in the killings.

“Standing here today, with humility and respect, by your side, I have come to recognise our responsibilities,” Macron said in a speech at the Kigali Genocide Memorial.

His highly anticipated speech did not contain a formal apology, but he went further than his predecessors and said that only those who had survived the horrors “can maybe forgive, give us the gift of forgiveness.”

“His words were something more valuable than an apology. They were the truth,” Kagame said.

Macron is the first French leader since 2010 to visit the East African nation, which has long accused France of complicity in the killings.

Macron said France “was not complicit” in the genocide.

“But France has a role, a story and a political responsibility to Rwanda. She has a duty: to face history head-on and recognise the suffering she has inflicted on the Rwandan people by too long valuing silence over the examination of the truth”.

Egide Nkuranga, president of the main survivors’ association Ibuka, told AFP he was disappointed that Macron did not “present a clear apology on behalf of the French state” or “ask for forgiveness”.

However he said Macron “really tried to explain the genocide and France’s responsibility. It is very important. It shows that he understands us.”

The French president is on a one-day leg to Kigali before flying to South Africa Friday for a visit devoted to the coronavirus pandemic and vaccine production.

The genocide between April and July of 1994 began after Rwanda’s Hutu president Juvenal Habyarimana, with whom Paris had cultivated close ties, was killed when his plane was shot down over Kigali on April 6.

Within a few hours extremist Hutu militia began slaughtering Tutsis, and some moderate Hutus, with a scale and brutality that shocked the world.

Victims were felled with machetes, shot, or massacred while seeking shelter in churches and schools, while sexual violence was rife.

France, which provided political and military support to Kigali during a civil war preceding the genocide, has long been accused of turning a blind eye to the dangers posed by Hutu extremists in a country which had already seen several large scale massacres in its past.

“In wanting to block a regional conflict or a civil war, (France) in fact continued to support a genocidal regime. By ignoring alerts from the most clear-headed observers, France assumed an overwhelming responsibility in a chain of events that resulted in the worst scenario,” said Macron.

The question of France’s role and responsibility in the genocide has burned between the two nations for decades, leading to a complete diplomatic rupture between 2006 and 2009.

In 2010 Nicolas Sarkozy attempted to break the ice by admitting to “serious mistakes” and a “form of blindness” on the part of the French during the genocide.

His remarks fell short of expectations in Rwanda, and bilateral relations continued to fester.

However, ties have warmed under Macron, who has taken several steps to heal the wounds, including forming a commission led by historian Vincent Duclert into the role of France in the genocide.

The report accused Paris, which had close ties to the ethnic Hutu regime behind the massacres, of being “blind” to preparations for the genocide and said it bore “serious and overwhelming” responsibility.

The commission found no proof, however, of French complicity in the bloodshed.

A subsequent report commissioned by Kigali said the French government “bears significant responsibility” for enabling the genocide in Rwanda, yet refused to acknowledge its true role in the 1994 horror.

To cement their rapprochement, Macron is expected to use the visit to name an ambassador to Rwanda, filling a post left vacant since 2015.

While Rwanda is often hailed as a success story for the comparative stability and economic growth achieved in the decades since the genocide, Kagame regularly comes under fire from rights groups for crushing dissent.

Two of Rwanda’s highest-profile opposition leaders on Tuesday accused Macron of ignoring political repression and rights abuses in their country.

“French President Emmanuel Macron does not hesitate publicly to bluntly castigate dictatorial regimes but keeps silent with regard to the authoritarian rule and human rights abuses by the Rwandan regime,” critics Victoire Ingabire and Bernard Ntaganda said in a statement.