The Times of Earth, International Edition
0
848 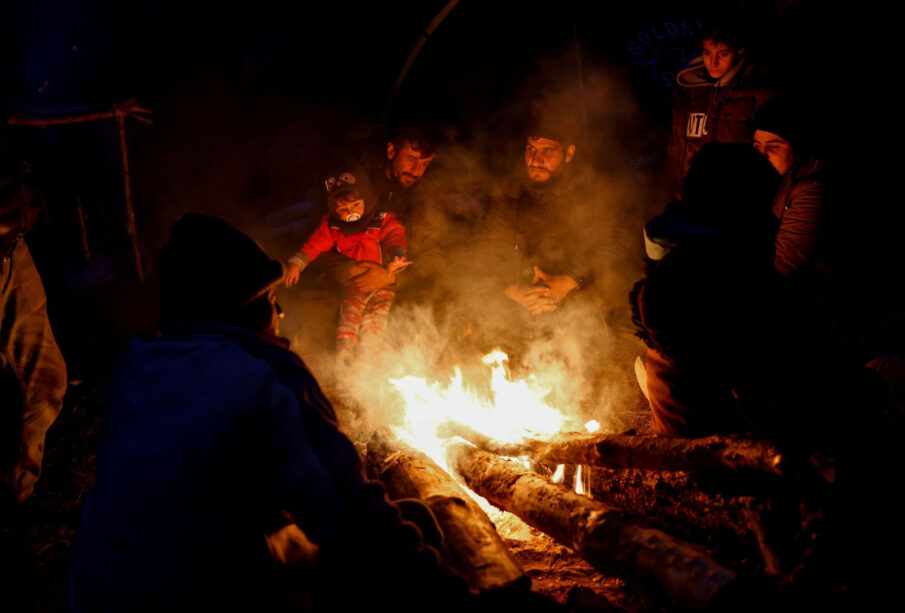 France told Russia on Monday NATO would be prepared to defend the sovereignty of Ukraine, near where NATO says Moscow has been staging a troop buildup, while Western leaders sought to tackle a migrants crisis on the eastern borders of the European Union.

The European Union agreed to step up sanctions against Belarus over thousands of migrants stranded in freezing forests on its borders with the EU. Belarus, a close Russian ally, said assertions it had fuelled the crisis were “absurd”.

Speaking by telephone to Russian President Vladimir Putin as part of a flurry of conversations between Western leaders and Russia, Belarus and Ukraine, the French leader spoke of his strong concern over the situation on Ukraine’s borders.

“Our willingness to defend Ukraine’s sovereignty and territorial integrity was reiterated by the president,” an adviser to Macron told reporters of the conversation Macron initiated.

The EU is seeking to stop what it says is a policy by Belarus to push migrants towards it to avenge earlier sanctions over a crackdown on protests last year against veteran leader Alexander Lukashenko’s contested re-election.

Belarus and Russia have both repeatedly denied any role.

NATO Secretary-General Jens Stoltenberg said earlier on Monday NATO did not want to speculate on Russia’s intentions on Ukraine, while adding: “We see an unusual concentration of troops, and we know that Russia has been willing to use these types of military capabilities before to conduct aggressive actions against Ukraine.”

The U.S. Defense Department said it continued to see Russia concentrate forces along with unusual military activity near its border with Ukraine. Pentagon spokesman John Kirby said the build-up was concerning and U.S. Defense Secretary Lloyd Austin would meet his Ukrainian counterpart on Thursday.

Russian-backed separatists took control of Ukraine’s eastern Donbass region in 2014 in a conflict that has rumbled on. Moscow also annexed Crimea from Ukraine earlier that year after the former Soviet republic sought closer ties with the EU.

Moscow claims the Black Sea waters around Crimea, although most countries consider the peninsula still Ukrainian.

In the Kremlin’s readout of the call with Macron, Putin said large-scale military drills staged by the United States and its allies in the Back Sea were a “provocation”.

“This is increasing tensions in relations between Russia and NATO,” the Kremlin said.

The two leaders also discussed the migrants crisis. Macron’s adviser said they had agreed on the need for a deescalation while the Kremlin reiterated Russia’s insistence that the EU discuss it directly with Minsk.

Migrants – mostly from Iraq and Afghanistan – began appearing on Belarus’ land borders with the EU this year, trying to cross into member states Lithuania, Latvia and Poland via routes not used before.

The top EU diplomat, Josep Borrell, said a fifth package of sanctions had been agreed by EU foreign ministers and would be finalised in the coming days. They would target airlines, travel agencies and individuals involved in “this illegal push of migrants”, he said.

Latvia said on Monday it had deployed 3,000 troops for a previously unannounced military exercise near the border. It, Lithuania and Poland make up the eastern flank of the EU and NATO, while Ukraine is not a member of either western group.

Several hundred migrants, some throwing stones, made a new attempt on Monday to cross the border near the Polish village of Starzyna, but were forced back, Polish police said on Twitter.

The talks are the first known contact between the Belarusian president and a Western leader since last year’s presidential election in Belarus triggered mass protests by demonstrators accusing Lukashenko of electoral fraud, a charge he denies.

Merkel and Lukashenko agreed to continue their exchange, the spokesperson said, but gave no sign a breakthrough had been made. Merkel has spoken twice to Putin in recent days.

The EU’s executive, the European Commision, said it was looking into whether other airlines should face sanctions after the bloc banned Belarus’ state-owned carrier Belavia from its skies and airports. Ireland said EU aircraft leasing contracts with Belavia would also end.

Lukashenko said Belarus was trying to persuade migrants to go home but that none of them wanted to return. Minsk would retaliate against any new EU sanctions, he said.

The EU has been stepping up sanctions on Belarus for months. Curbs already in place include blacklisting of Lukashenko, his son and 165 other Belarusian officials, as well as restrictions on trade in potash, an important export.

In Washington, the White House said it was in close contact with EU allies to hold the government of Belarus accountable.

The Kremlin, which has sent strategic bombers to patrol over Belarus, said Putin spoke to Lukashenko on Sunday and Moscow had no plans to reroute gas flows away from Belarus despite Minsk threatening to cut transit to Europe through the Yamal pipeline.

At least eight people have died along the 200-km (124-mile)long land border between Poland and Belarus, including from cold and exhaustion. The sparsely populated area of lakes, swamps and forests is becoming even more hostile to people trying to keep warm around bonfires through the cold November nights.

The EU’s Borrell urged Warsaw to allow humanitarian aid on the frontier, where Poland has deployed some 20,000 police, border guards and soldiers.