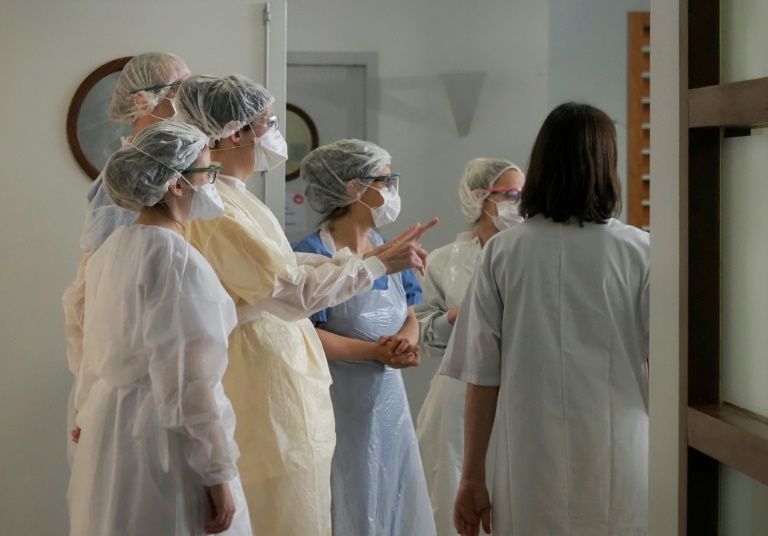 With those worst hit by the virus facing an agonising death from asphyxia, palliative care specialists in France are struggling amid drug shortages to give victims the most humane end possible.

As the epidemic gathers pace, care teams in the badly hit east of the country have been sharing their experiences of how they made tough decisions on who should and should not be given precious intensive care beds.

For some patients, such treatment may be both pointless and cruel, argued Professor Olivier Guerin, who heads the French Gerontology and Geriatrics Society (SFGG).

“Making the choice of who should be resuscitated is what intensive care teams do all the time,” he said.-

Even before the coronavirus, for certain patients with chronic problems who experience extreme “breathing problems… we know that resuscitation is not beneficial in the long run,” said Dr Thibaud Soumagne, a lung specialist, who works in an intensive care unit in Besancon near the Swiss border.

“We would be making them suffer for nothing,” he added.

Professor Regis Aubry, a former head of the French Palliative Care Society (SFAP), who is working in a special COVID-19 unit in another hospital in eastern France, said with victims dying without the comfort of friends and family — for fear of infection — they had to make their end of life as comfortable as possible.

“Just because we are in an emergency situation, we should not forget about being humane,” he told AFP.

SFAP has set up a hotline to advise staff in old people’s homes, where more than 2,000 have died in France since the epidemic began.

The society said the homes should be given greater medical support for palliative care as others have called for the lifting of restrictions on the use of certain drugs outside hospitals.

Mobile palliative care units are also being set up in some parts of the country.

Dr Bernard Devalois, a palliative care doctor in Bordeaux, warned that with reports of shortages of morphine and the drug midazolam — which when used together help soothe the end of life — there would be a “temptation of euthanasia” in care homes where staff are faced with the terrible suffering of asphyxia.

He said that France should have had a “strategic reserve of midazolam” and said he proposed setting one up 15 years ago to be used in pandemics of the kind we are now experiencing.

Dr Devalois said the breathing difficulties that come with severe COVID-19 caused great anguish, and patients may need to be treated with anti-anxiety drugs like alprazolam (Xanax) et prazepam (Lysanxia) when they can still take them orally.

But when they are suffering from asphyxia they need to be profoundly sedated quickly, he added.

Dr Devalois argued that the authorities must ask hospital pharmacies to send sufficient supplies of drugs like midazolam to old people’s homes, that normally don’t have access to them.

He said carers’ mission must be to ensure that victims do not have horrible deaths.

With up to a third of the deaths from the virus in France happening in old people’s homes, Professor Claude Jeandel, head of the national group of geriatric practitioners, said care assistants should be given access to drugs recommended by the SFAP.

He said they were need to soften the distress of “asphyxia for the very many residents who will not be hospitalised and who will die in the homes.”