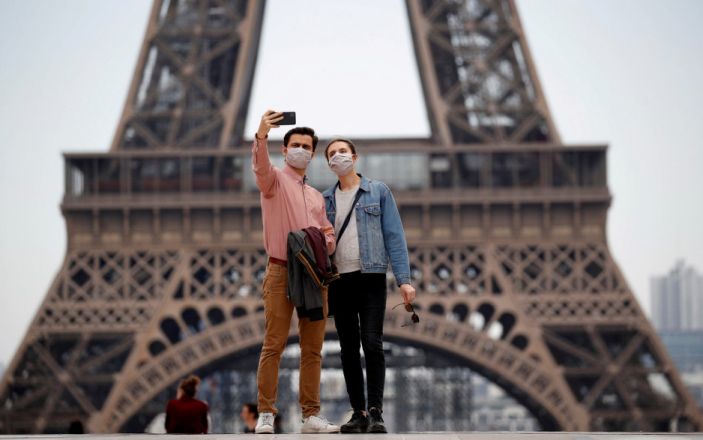 People wearing face masks take a selfie at Trocadero square near the Eiffel Tower, as France began a gradual end to a nationwide lockdown - REUTERS

Coronavirus cases in France continue to fall one month after ending the strict eight-week lockdown, with no ‘second peak’ in infections as restaurants open, children return to school and families travel for weekend breaks.

The figures offer a rosy picture for Emmanuel Macron, the president, to present to the nation in an address on Sunday night that will attempt to reassure an anxious public that the government has a viable “post-virus” plan to put the country back on its feet.

Authorities say there are only 933 virus patients in intensive care across the country, down from 7,148 in April. The number of new admissions to emergency units, meanwhile, was 20 in the last 24 hours.

An analysis of the pandemic in France over the last month this week by the newspaper Liberation confirmed the trend since the end of the lockdown, noting a “slow, progressive but constant return towards normality”.

It added: “It seems improbable the curve will rise again in the coming weeks.”

To boost tourism, France and other EU countries will gradually reopen their borders to countries outside the Schengen passport-free travel zone from July 1 after a three-and-half month closure.

In his first major public speech since April, Mr Macron is expected to outline a further lifting of restrictions, such as a possible easing of social distancing rules in French schools.

Restaurateurs are lobbying the government to ease the rules further. “We can’t make a living with only a fraction of our customers,” said Xavier Denamur, the owner of five bistros in Paris. “Public health is paramount, but as the danger of infection comes down, we need to start charting a path back to normality.”

Françoise Pinel, 42, a Parisian mother of three, said: “Many parents want an end to social distancing in schools. Kids have to get back to normal activities, so we’re hoping Macron will have good news for us.”

Ninety per cent of the French are expected to holiday in France this summer, but the national rail company and airlines report fewer bookings than normal and they are scaling down services accordingly.

Nicolas Kremer, the general manager of Parc Astérix, said face-masks would be compulsory on rides. Hundreds of hand gel dispensers have been installed. “We’ve set a maximum of 5,000 visitors on Monday but that will be increased gradually and we hope to get up to 10,000 a day by next weekend.”

Mr Macron’s approval ratings have fallen, with many French people criticising his management of the Covid-19 crisis and pointing out that Germany handled it better. He has been blamed for a shortage of face-masks and PPE at the height of the outbreak.

France has reported fewer than 30,000 coronavirus deaths in hospitals and care homes since the pandemic began. Only 879 Covid-19 patients remained in intensive care on Saturday.

The country still has 126 “active” clusters of infections, with particular concern about higher numbers of cases in eastern and northern regions. As of Saturday morning 29,374 people in France had died of Covid-19, according to official statistics.

England’s shops back in business as lockdown eased