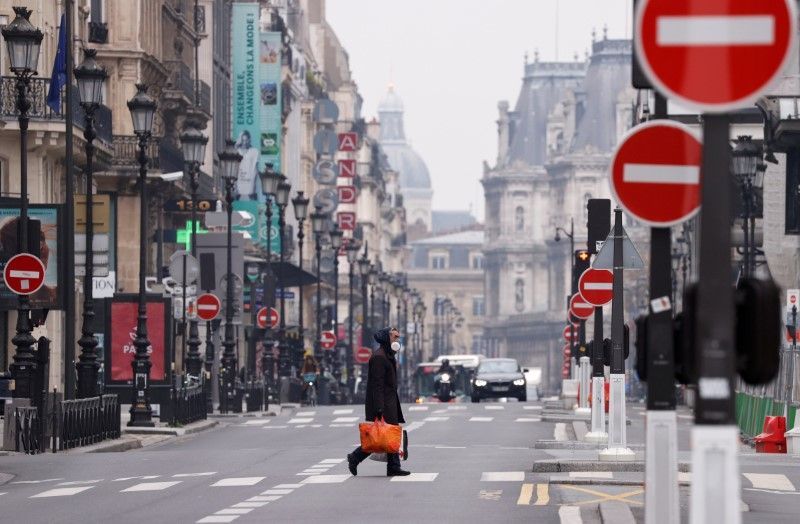 France will extend a two-week lockdown if the coronavirus threat persists, the government said Thursday, as one national police union urged officers to refuse tasks that brought them into close proximity with the public because of a face mask shortage.

As the coronavirus sweeps across the globe, country upon country has announced tough restrictions on public life as policymakers struggle to deal with the biggest public health crisis since the 1918 influenza pandemic.

After President Emmanuel Macron on Monday ordered a lockdown unprecedented in France during peacetime, his interior minister said the government would not hesitate to prolong the tough restrictions if needed.

“We have only one goal, which is to win the war against COVID-19,” the minister, Christophe Castaner, told Europe 1 radio.

Some 100,000 police have fanned out across France to enforce the lockdown, with people allowed out of their homes only to buy groceries, go to work, exercise alone or seek medical help. The measure prompted a mass exodus from Paris to the countryside.

Anyone venturing outside must carry a document justifying their movement, or risk a fine. In the past 24 hours, tens of thousands of police checks had been carried out and more than 4,000 penalties issued, Castaner said.

From the western Atlantic coast to the French Riviera, police used loudspeakers to clear beaches as the first week of warm sunshine lured people outdoors.

“It is not heroic to flout the rules, it is moronic,” Castaner said.

On Thursday, Macron and his government were coming under intense pressure from doctors, police and the public over a shortage of face masks, gloves and other protective gear.

Countries across Europe are desperately seeking to ramp up the production of face masks, with tight supplies from Italy to Germany testing solidarity between European Union member states.

One nurse working at the Pitie Salpetriere hospital in Paris, whose intensive care unit is on the frontline in the battle to keeping critically-ill coronavirus sufferers alive, told Reuters basics like masks and hand sanitizer were in short supply.

“Medics (in other wards) who do not show any symptoms are being asked to work with no protection. It’s shocking,” the nurse said, requesting anonymity because she is not authorized to talk publicly.

There were also complaints from police that officers tasked with manning checkpoints did not have adequate protective gear. The moderate CFDT union urged its officers to stop all vehicle checks or jobs that brought them into close contact with people.