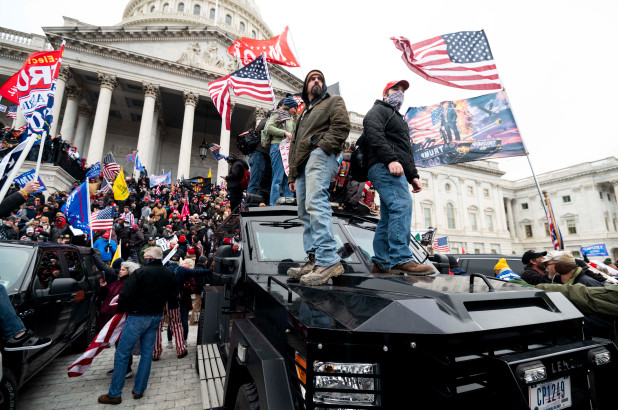 Trump supporters stand on a Capitol Police armored vehicle as others take over the steps of the Capitol. ZUMAPRESS.com

At least four people have died during riots at the US Capitol on Tuesday, according to police in Washington DC.

Three people died from medical emergencies, according to law enforcement. One woman was shot by Capitol Police.

“We will not know the cause of death – we believe some type of medical emergency,” Washington DC’s Metropolitan Police Department chief Robert Contee said on Tuesday night. “The gunshot wound victim … she is the one transported from the scene to an area hospital.”

At least 52 people have been arrested, mostly for breaking curfew, according to the chief.

A cooler filled with a long gun and molotov cocktails was also discovered on Capitol grounds.

Donald Trump-supporting rioters breached the halls of Congress on Tuesday afternoon, forcing staff and lawmakers to barricade themselves in offices and take cover under chairs in the House after both chambers convened to formally count the Electoral College results from the 2020 presidential election.

A Capitol Police officer fired at a woman, who was pronounced dead at a nearby hospital. Police have not identified the woman, pending notification of next of kin. The Metropolitan Police Department’s internal affairs division is investigating the killing.

One woman and two men “appeared to have suffered from separate medical emergencies, which resulted in their deaths,” the chief said.

At least 14 DC police officers were injured; two officers are in hospital, though none of their injuries are serious, according to the chief.

Police at the Capitol and in DC have faced intense criticism for an apparent lack of urgency to stop violent mobs from breaching the Capitol, breaking windows and climbing into the building, compared to aggressive law enforcement responses to protests across the nation’s capitol over the last several months.

Chief Contee said “obviously” not all rioters have been arrested, though Mayor Bowser said police will send out alerts seeking information about people who broke into the Capitol.

“We will be on the look out,” she said. “Some of them, we think, very much have to be held accountable for the carnage.”

What happened at the Capitol?

Protesters surged up the Capitol steps at about 14:15 local time (19:15 GMT), shoving past barricades and officers in riot gear to penetrate the building.

The action was targeting the joint session of Congress being held to certify Biden’s election victory on 3 November. The invasion sent members of Congress scrambling for cover under their seats as tear gas was fired.

The mob – some of whom wore body armour – used chemical irritants to attack police, according to Washington Metropolitan Police Chief Robert Contee.

They shouted and waved pro-Trump and US flags as they roamed the halls, demanding the results of the presidential election be overturned.

The occupation of the Capitol lasted more than three hours before the building was secured by law enforcement. But there was little sign the protesters were heeding Trump’s call to go home, despite a citywide curfew declared by the city mayor from 18:00 to 06:00.

So far, more than 52 people have been arrested – 47 of them for curfew violations.

There were also protests on Wednesday at state legislatures in Kansas, Georgia, Utah and on the other side of the country in Oregon and the north-western state of Washington.

SOURCE: The Independent, BBC AND AGENCIES