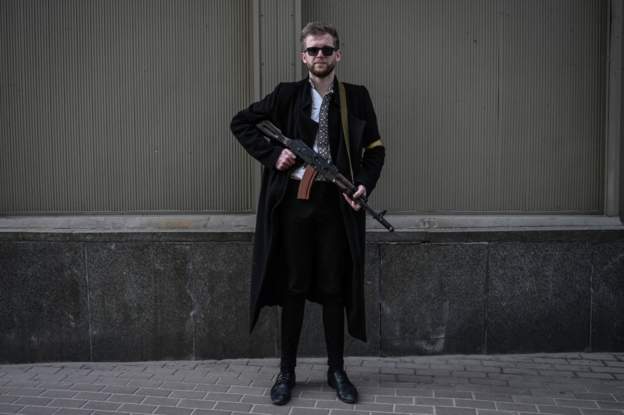 Visa-free travel will be allowed starting 1 March for any foreigners wishing to enter Ukraine to fight against Russia, he said.

He also accused Russia of committing a “war crime” in Kharkiv on Monday.

“Dozens of eyewitness accounts prove that this is not a single false volley, but a deliberate destruction of people,” he said, describing the artillery attacks.

“No-one in the world will forgive you for killing peaceful Ukrainians,” he continued, adding: “Evil – armed with missiles, bombs and artillery – must be stopped immediately.

“Destroyed economically. Showed that humanity knows how to defend itself.”

He warned residents of the capital: “For the enemy, Kyiv is a key goal.

“They want to shut down the power plant and leave our city without electricity.

“We did not allow them to break the defence of the capital.

“And they send saboteurs to us. Constantly. Hundreds.

“Every one, we neutralise them all.”