Foreign fighters in Ukraine await weapons in chaos of war 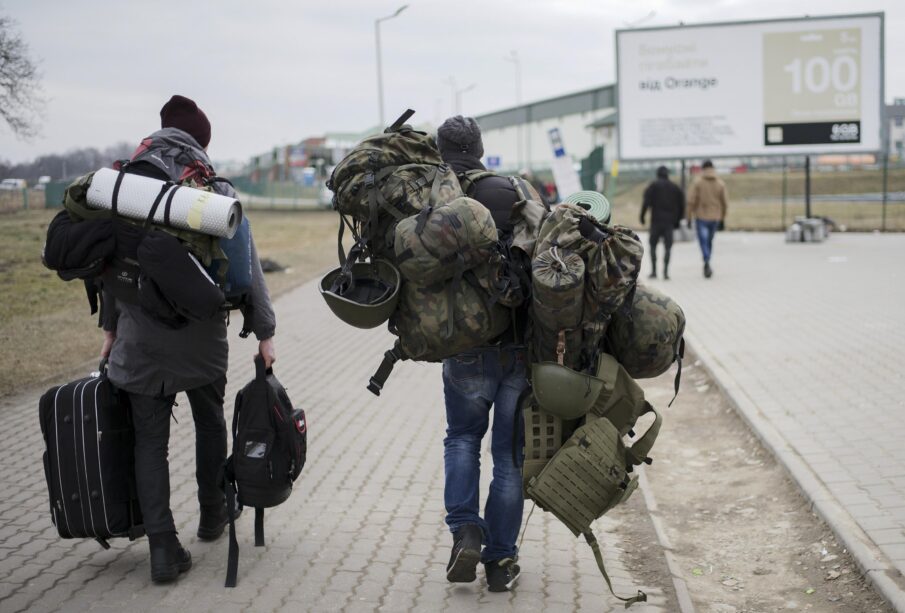 A man carries combat gear as he leaves Poland to fight in Ukraine, at the border crossing in Medyka, Poland, Wednesday, March 2, 2022. (AP Photo/Markus Schreiber, File)

They are idealists who abandoned their jobs for the battlefields of Ukraine, looking for a cause or simply to fight.

The Ukrainian president’s call for foreign volunteers to join an international brigade to help bolster his country’s defense with a new layer of resistance to Russia’s invasion is for now a ragtag army.

Recruits say they are often waiting for weapons and training, leaving them feeling exposed.

That is how Swedish volunteer Jesper Söder described Sunday’s attack on Yavoriv, the military training base in western Ukraine pounded by Russian missiles that killed 35 people, according to Ukrainian authorities. Russia said the death toll was much higher.

Söder said he led a group of foreigners including Scandinavians, British and Americans out of the base and back across the nearby Polish border.

He told The Associated Press by phone from Krakow, Poland, that he said he didn’t know how many foreign volunteers were being trained at the base but estimated they were in the hundreds. Unlike Söder, who fought alongside Kurdish fighters in Syria against Islamic State group militants, many of the volunteers at Yavoriv had no previous military training, he said.

Foreigners — some of whom have never handled a firearm yet but are ready to die — have arrived in Ukraine from other European countries, the United States and elsewhere. They are hoping to get equipped, instructed and made battle-ready.

But some arrive to discover that there are no weapons, protective gear or proper training in a multilingual force short on organization and breeding a sense of chaos.

Threats by Russia to target what it calls foreign “mercenaries,” as it said it did at the Yavoriv base, increase the level of risk.

“It’s chaotic right now. It’s disorganized, and you can get yourself in trouble very quickly if you’re not with a sensible switched-on group of people,” said Matthew Robinson, a British man from the northern England county of Yorkshire who had been living in southern Spain.

Robinson and several other volunteer fighters were interviewed this weekend on the outskirts of Lviv, where foreign fighers are receiving training and instruction.

A recent arrival, Robinson is remaining cautious as he tries to sort things out. He said that there are “multiple legions, lots of false promises, lots of misinformation.” In addition, there is a “massive language barrier” and “a lot of people here who haven’t fired weapons.”

Russia’s threats to target what it calls “mercenaries” compounds the dangers facing foreign fighters. Russia has claimed it killed 180 “mercenaries” in Sunday’s training base attack, and Russian Defense Ministry spokesman Maj. Gen. Igor Konashenkov said Monday that the Russian forces will show “no mercy for mercenaries wherever they are on the territory of Ukraine.”

The Russian military is tracking foreign fighters’ movements and will strike again, he said.

Söder’s account of the attack on the training base suggested it was not an indiscriminate strike.

Söder said the bombing of the base was different from anything he had experienced.

Jericho Skye, 26, a Montana native who served in the U.S. Army military police, was relieved he based himself in Kyiv, the capital, far from the attack in the west, all the more so because he was awaiting weapons at a makeshift base. He keeps alive hope that arms soon will be distributed and his belief that Ukrainians are doing their best in a dire situation.

“We’re pretty upset that we’re in the middle of a combat zone with small arms fire on the road, bombs being dropped almost every day and we haven’t been given our weapons yet just because of bureaucracy and paperwork,” he said.

Skye spoke in a telephone call from Paris from what he described as a makeshift collection post for foreign fighters in Kyiv, which he reached last week, making his way there a day after arriving in Ukraine.

“This is my first war,” Skye said. He came to Ukraine “to help protect,” not “do logistics,” he said, motivated by images of innocent civilians being targeted. And when he “saw no other countries were going to be able to reinforce Ukrainian troops, I felt a moral obligation to join the fighting,” he added.

NATO nations have ruled out direct combat and air defense that Ukraine is pleading for, with leaders saying that could trigger a third world war.

“It’s just them against the entire Russian military,” Skye said, noting Moscow’s call for war-hardened mercenaries from Syria to beef up its own ranks.

“It’s a little disorganized. Its nobody’s fault,” he added. “They weren’t really expecting to be invaded, be thrown into a war,” he said.

But death is not on his radar. “I’m very keenly aware of the situation,” But he added, “I’m going to do my very best to come home.”

President Volodymyr Zelenskyy announced the creation of a foreign defense legion in late February, apparently surprising everyone, including embassies tasked with lending a hand.

It wasn’t clear how many people from across the globe have joined Ukraine’s international brigade. Zelenskyy said at one point that there were 16,000. The figure, which would now be outdated, couldn’t be confirmed, but based on interviews in Ukraine and in some European capitals, a motley volunteer war effort is shaping up.

Skye said volunteers from all points of the globe were with him in Kyiv, but wouldn’t give a number, calling that “sensitive information.”

En route to the Ukraine battlefields was Tristan Lombardo, a 22-year-old from Evansville, Illinois.

“I feel like it’s the right thing to do, and that’s the best way to get your passions, in life,” he said in an interview Monday at the Polish border.

There was clear evidence that at least some Ukrainian embassies were overwhelmed by the enthusiasm of foreigners for Ukraine’s cause. In Paris, Ukrainian volunteers, including students, stood on the sidewalk to advise would-be fighters arriving from Bordeaux, Rouen and elsewhere in France to submit an electronic form.

A 27-year-old New York state “relatively successful” business owner and former paratrooper in the Israeli military told the AP on the Polish border that he talked directly with Ukrainian army officials. He said “they got overwhelmed,” especially by those with no previous training.

He identified himself only as Alexander, saying he hadn’t informed his parents of his plans to fight but signed up because, as a former paratrooper, he felt an “absolute responsibility” to help people of Ukraine. His “cue,” he said, was seeing rabbis drafted into the army and given AK-47s.

Saving democracy is among top motives often cited by would-be foreign fighters, and some in place. But saving Ukraine has also become an attractive cause for the far right, neo-Nazis and white supremacists, providing a chance to fight.

Recruiting chats on the encrypted Telegram messaging app are run by the Azov Regiment, popular with neo-Nazis and white supremacists, and American neo-Nazis work to recruit for Azov, the respected SITE Intelligence Group says. Azov Regiment originated as a far-right paramilitary unit and is now a subset of the Ukrainian military, according to SITE.

A Chicago police officer who quit his job to join Zelenskyy’s defense brigade has high-minded motives for what he sees as a noble cause. Harrison Jozefowicz, who spent five years in the U.S. Army, sees himself, firstly, as a “facilitator.”

“There are war crimes being committed here and refugees fleeing in the millions. And I know that I am needed here more right now” than at the Chicago Police Department, he said in an interview on the outskirts of Lviv. He conceded that his family “thought I was a little crazy.”

His Task Force Yankee Ukraine, on Facebook, seeks to get Americans into Ukraine safely. While 90% of respondents have military training, “we’re not turning anybody away right now,” he said, including mechanics or doctors with needed skills.

“If any single person was thinking of coming here, organize yourself into groups and set yourself some limits” and seek information before arriving, Robinson said. “Because you can be railroaded into a legion and sent to the front line very quickly,” he said.

He added, “Even though you’ve got the best of intentions to help people, you could basically be cannon fodder.”