Floodwaters still rising in western Europe with death toll over 120

The Times of Earth, International Edition
0
274 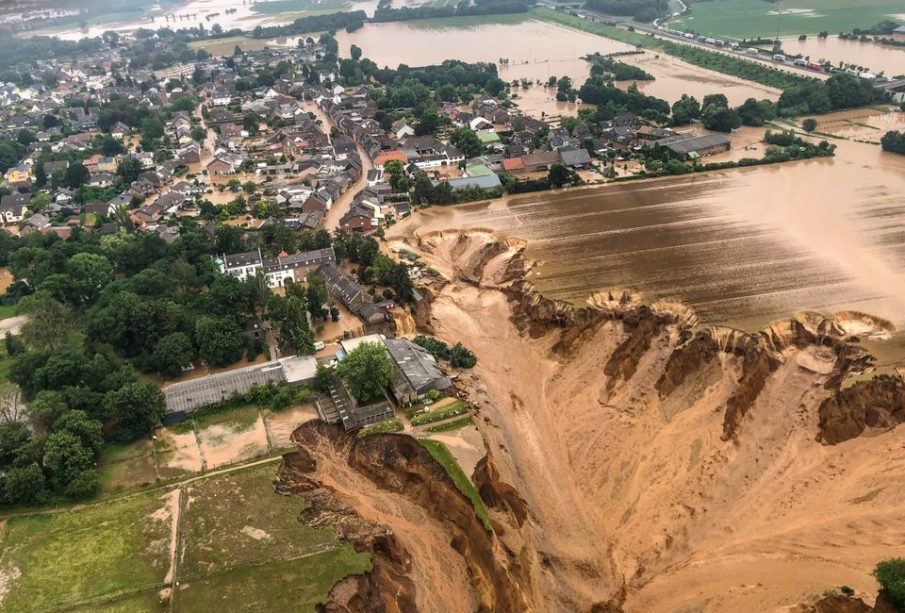 An areal view after flooding at Erftstadt-Blessem, Germany, July 16, 2021. REUTERS/Rhein-Erft

More than 1,000 people were missing in flood-stricken regions of western Germany and Belgium on Friday, where waters were still rising with the death toll already well over 100 and communications in some areas cut.

Entire communities lay in ruins after swollen rivers swept through towns and villages in the western German states of North Rhine-Westphalia and Rhineland-Palatinate, Belgium as well as the Netherlands.

“It was terrible not to able to help people,” Frank Thel, a resident of Schuld in Rhineland-Palatinate, told Reuters in front of a pile of rubble. “They were waving at us from windows. Houses were collapsing to the left and right of them and in the house between they were waving.”

In Germany alone, 103 people have died in what is the country’s worst mass loss of life in years. Twelve of the dead were residents of a home for disabled people in Sinzig south of Cologne who were surprised by the flash floods during the night.

The death toll is expected to rise further as more houses collapsed, while in Belgium, media said at least 14 had died.

Some 114,000 households in Germany were without power on Friday and mobile phone networks had collapsed in some flooded regions, which meant that family and friends were unable to track down their loved ones.

In Rhineland-Palatinate, around 1,300 people were reported missing in the Ahrweiler district south of Cologne, the district government said on Facebook.

Roads around the town were impassable after being washed away by the floods. Rescue crews tried to reach residents by boat and had to communicate via walkie-talkie.

“The network has completely collapsed. The infrastructure has collapsed. Hospitals can’t take anyone in. Nursing homes had to be evacuated,” a spokeswoman for the regional government of Cologne said.

The German military has deployed over 700 soldiers to support rescue efforts.

Authorities worried that further dams could overflow, spilling uncontrolled floods into communities below, and were trying to ease pressure by releasing more water from them.

Some 4,500 people were evacuated downstream from the Steinbachtal dam in western Germany, which had been at risk of a breach overnight, and a stretch of motorway was closed.

The devastation of the floods, attributed by meteorologists to a climate-change driven shift in the jet stream that has brought in land water that once stayed at sea, could shake up an election that has until now seen little discussion of climate.

Proposals by the Greens, running a distant second in polls to Chancellor Angela Merkel’s conservatives, to introduce motorway speed limits to cut carbon emissions had drawn outrage. But this dramatic illustration of the raw power of nature slighted could refocus campaigning ahead of the September vote.

One of the candidates to succeed Merkel, her party’s Armin Laschet, was at centre stage as premier of North Rhine-Westphalia, where 23 towns and rural districts took extensive damage.

“It is a sad certainty that such extreme events will determine our day-to-day life more and more frequently in the future,” Laschet said, adding that more measures were needed to fight global warming.

European Commission chief Ursula von der Leyen said the scale and intensity of the flooding was a clear indication of climate change and demonstrated the urgent need to act, echoing an earlier message from Merkel herself.

Thousands of residents in the north of the Limburg province in neighbouring Netherlands were ordered to leave their homes early Friday as floodwaters peaked.

Emergency services were on high alert, and authorities were also reinforcing dikes along vulnerable stretches where floodwaters continue to rise.

Waters were receding in the southern city of Maastricht, where there was no flooding and in the town of Valkenburg, where damage was widespread, but no one was hurt.

In Belgium, at least four people were missing. The Belgium crisis centre has urged people in large parts of the south and east of the country not to travel.

France sent 40 military and a helicopter to Liege in Belgium to help with the flood situation, Prime Minister Jean Castex said on Twitter.

Climate change is responsible for the extremity of the catastrophic floods ravaging parts of Europe, political leaders on the continent have said.

“The waters are rising more and more. It’s scary,” Thierry Bourgeois, 52, said in the Belgian town of Liege. “I’ve never seen anything like it.”

In the town of Maaseik, on the Dutch border, the Meuse had risen beyond a retaining wall and was spilling past bags placed on top.

Several towns and villages were already submerged, including Pepinster near Liege, where around 10 houses partially or fully collapsed.

The death toll in Germany is the highest of any natural catastrophe since a deadly North Sea flood in 1962 that killed around 340 people. The crash of a high-speed ICE train in 1998 killed 101.

Floods at the Elbe river in 2002, which at the time were billed by media “once-in-a-century floods”, killed 21 people in eastern Germany and more than 100 across the wider central European region.

German Interior Minister Horst Seehofer told magazine Spiegel the federal government aimed to provide financial support for the affected regions as quickly as possible, adding a package of measures should go to the cabinet for approval on Wednesday.