Floods kill over 300 in Nigeria this year, and could worsen -emergency agency

The Times of Earth, International Edition
0
174 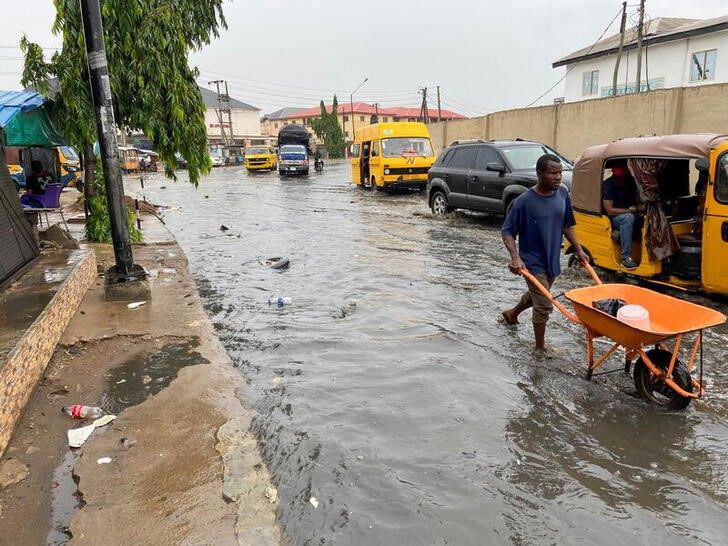 A man wades through flood water with his wheel barrow, after rainfall with some objects seen floating in the flood water in Lagos, Nigeria April 17, 2021. REUTERS/Seun Sann

Floods in Nigeria have killed at least 300 people this year and the situation could worsen due to heavy rainfall and the effects of excess water from a dam in Cameroon that will affect 14 Nigerian states, the disaster management agency said.

The National Emergency Management Agency (NEMA) held an emergency meeting on Monday to review the flood situation and plan a response.

More than 100,000 people have been displaced by flooding since the start of the rainy season and are now living in temporary shelter, NEMA director general Mustapha Habib Ahmed said in a statement made available to Reuters on Tuesday.

Ahmed said Cameroon opened flood gates at Lagdo dam last week and the spillover effects combined with heavy rainfall would lead to flooding in 14 states, including those in the oil-producing Niger Delta.

“I want to advise all the governments of the frontline states to move away communities at risk of inundation, identify safe higher grounds for evacuation of persons, and pre-position adequate stockpiles of food and non-food items, potable water, hygiene, safety and security,” Ahmed said.

Several parts of Nigeria are susceptible to seasonal flooding with coastal states like Lagos at a higher risk.

Authorities in northeastern Yobe state said on Tuesday that heavy rains experienced since the weekend had submerged roads and swept a major bridge linking the state capital and some local government areas in the worst flooding seen in years.

Other states like Adamawa and Borno, which has battled an Islamist insurgency for more than a decade, have experienced flooding due to higher-than usual-rains, which has swept farms and added to the risk of food insecurity.