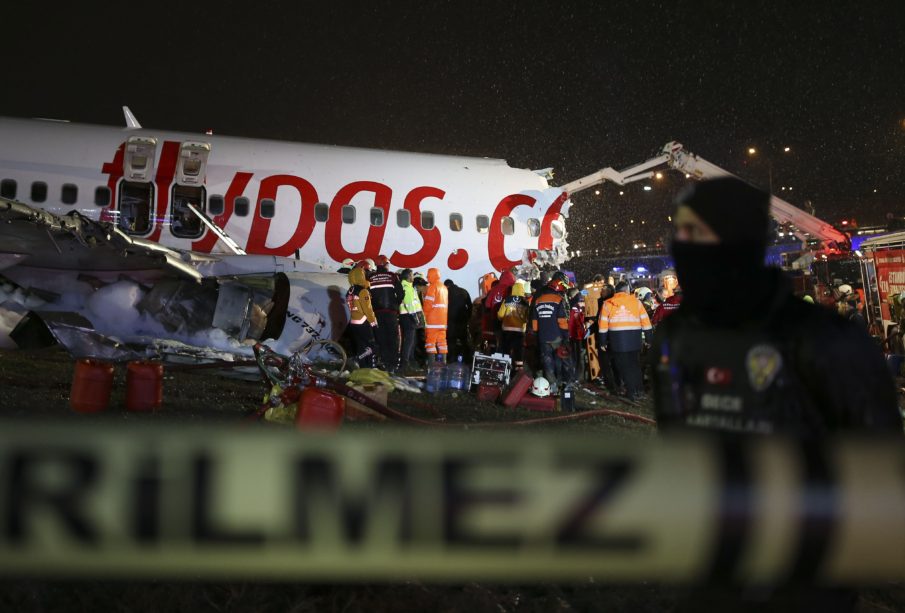 Flights resumed Thursday at an Istanbul airport after a Turkish airliner skidded off a runway, killing three people and injuring 180 others.

On Wednesday evening, a Boeing 737 operated by low-cost Pegasus Airline landed from Izmir on Turkey’s western coast during strong winds and heavy rain and overshot the runway. It skidded about 50 to 60 meters (165 to 200 feet) before it dropped into the ditch from a height of about 30 meters (98 feet), according to the city’s governor, Ali Yerlikaya.

The plane, carrying 177 passengers and six crew members, broke up into three parts upon impact. The plane was 11 years old, according to flight tracking website Flightradar24.-

The passengers included 22 people from 12 countries.

Pegasus Airlines changed its logo on Twitter to a blackened version in a sign of mourning, and said its “priority is to support the relatives and friends who have lost loved ones.” The company is majority-owned by Turkish billionaire Sevket Sabanci and his family, with 34.5% of shares floating in stock exchange Borsa Istanbul. Its fleet of 83 planes fly to more than 100 destinations.

Another Pegasus Airlines plane skidded off the runway at the same airport in Istanbul on Jan. 7, causing the temporary closure of the airport. There were no injuries.

In January 2018, another Boeing 737 in the Pegasus fleet slid off a runway at Trabzon Airport in northeastern Turkey. The plane came to rest in the dirt above the Black Sea with its nose pointed toward the water. No one was injured.

Trump acquitted of all charges in Senate impeachment trial