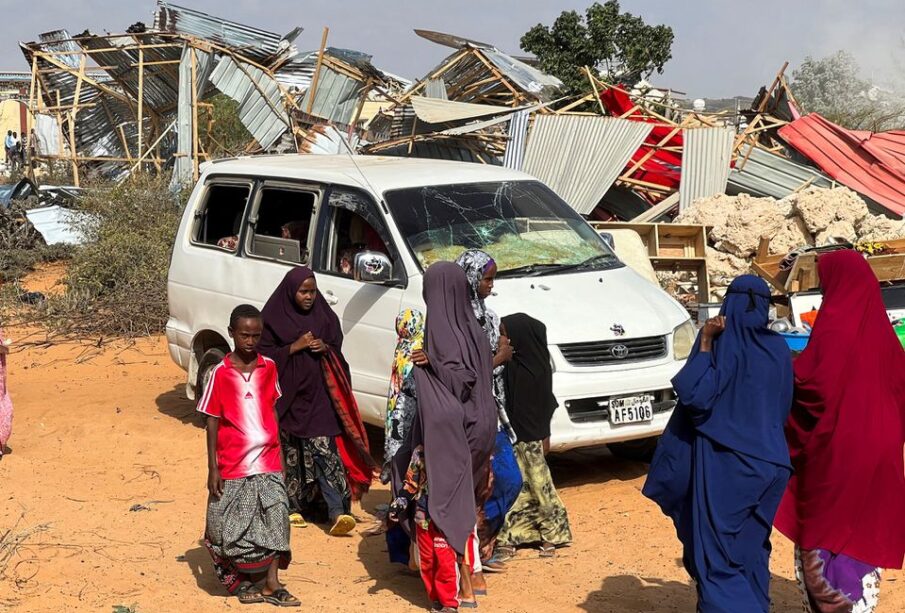 Somali women and children stand next a car and their destroyed homes following an overnight attack in Mogadishu, Somalia February 16, 2022. REUTERS/Feisal Omar

Al Shabaab militants attacked several police stations and security checkpoints in Somalia’s capital Mogadishu early on Wednesday, officials and the militants said, a show of force as the nation prepares for a much-delayed presidential election.

State TV reported that five people, two of them children, were killed in two attacks, one a the police station in the Kahda district and another in the Darasalam district.

The al Qaeda-linked militants carry out frequent attacks against the government and last week attacked a minibus carrying election delegates.

The group’s spokesman, Abdiasis Abu Musab, said fighters hit government targets in four districts in the capital and another area on the outskirts. He said the militants overran government bases and seized military vehicles and weapons.

It was not immediately possible to verify those claims.

Internal security minister Abdullahi Nor wrote on Twitter early on Wednesday: “The terrorists attacked the suburbs of Mogadishu and targeted our police stations and checkpoints. Our security defeated the enemy.”

Casualties from the attacks, which occurred just before 1 a.m. (2200 GMT), were unclear.

A Reuters witness who visited the scene of an attack on the Kahda police station said the building was destroyed, along with nearby houses. Local resident Halima Faragh told Reuters the explosions sounded like an earthquake and said she and her family fled their home in fear.

Mogadishu police spokesman Abdifatah Aden told Reuters that al Shabaab fighters had launched the attack on the police station and in another neighbourhood, Darusalam, in the city’s north-east. Speaking shortly after the attacks, he said security forces were exchanging gunfire with the militants and promised further updates, but did not respond to subsequent phone calls.

Al Shabaab have also recently made incursions outside the capital, including capturing a town in December in the semi-autonomous central state of Galmudug, residents said, a victory that underscored how the group was exploiting divisions between the central government and its erstwhile allies in other regions.

The latest attack came as indirect parliamentary elections are held. Elections for lawmakers began on Nov. 1 and were initially supposed to end on Dec. 24, but are currently due to be completed on Feb. 25.

Somalia’s indirect electoral process calls for regional councils to choose a senate. Delegates include clan elders who pick members of the lower house, which would then choose a new president at a date yet to be fixed.

A months-long dispute between Prime Minister Mohammed Hussein Roble and his political rival President Mohamed Abdullahi Mohamed has been blamed for the delayed presidential elections.

U.S. and NATO say Russia is building up troops near Ukraine, not ...