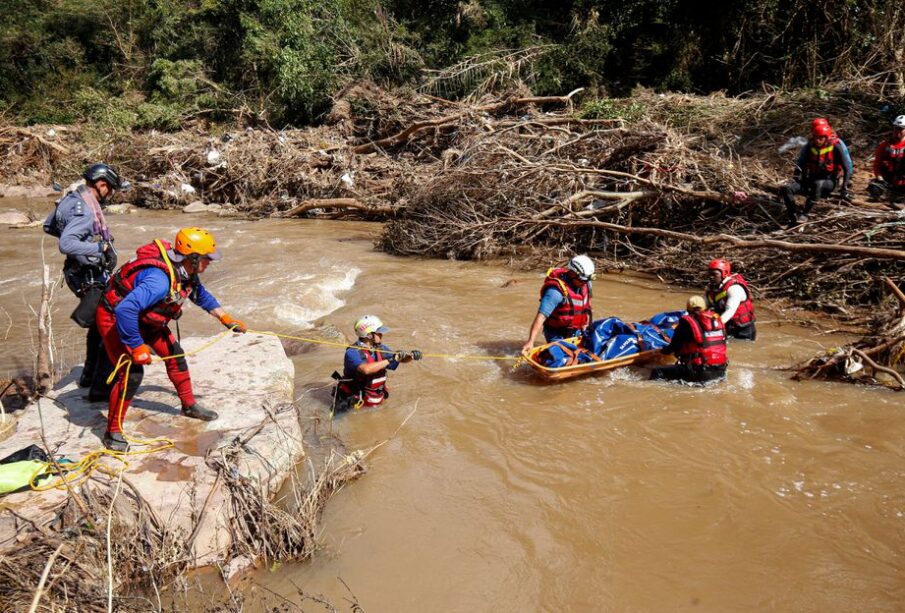 A search and rescue team prepares to airlift a body from the Mzinyathi River after heavy rains caused flooding near Durban, South Africa, April 19, 2022. REUTERS/Rogan Ward

After two years of the COVID-19 pandemic keeping tourists away, South African resorts along the popular eastern Indian Ocean coastline were hoping for a bumper Easter weekend.

But torrential rain last week triggered floods and mudslides, killing more than 440 people, knocking out power and water supplies and covering the beaches in and around the main port city of Durban, KwaZulu-Natal province, with debris.

Some hotels had a third of bookings cancelled and others were forced to close during what is normally the second-busiest time of the year. Provincial authorities say they were expecting around 360,000 arrivals, but got less than half of that.

Tourism remains a big employer in a country with over 30% unemployment. read more

“Coming out of COVID … we needed the tourists back, we were getting there, but these rains caused havoc,” financial planner Eugene Naidu told Reuters in his wrecked holiday home in the town of Umdloti, near Durban, where the walls were smeared with waist-high mud.

Africa’s southeastern coast is on the front line of seaborne storm systems that are being worsened by global warming, as it pushes up temperatures in the Indian Ocean, and scientists predict storms will get much worse in coming decades.

Naidu used to rent out his apartment on Airbnb and Booking.com and was fully booked in December and January. He said people like him could stand to lose a monthly income of 20,000 rand ($1,340) from holiday rentals.

Everyone in his building left on the day the mudslide started, apart from one elderly resident who had to be saved by a sea rescue team, he said.

A construction vehicle was still shifting piles of mud on the Umdloti beachfront on Tuesday, and Durban’s deserted North Beach was littered with rubbish and mangled branches.

Anthony Leeming, chief executive of hotel and resort chain Sun International (SUIJ.J), which owns a lodge and casino in KwaZulu-Natal, told Reuters business was a lot quieter than usual.

“We had hoped for a lot better Easter. It was unfortunate,” he said. “We’re certainly hoping this will not have a long-term impact.”