Fire breaks out in South African parliament in Cape Town 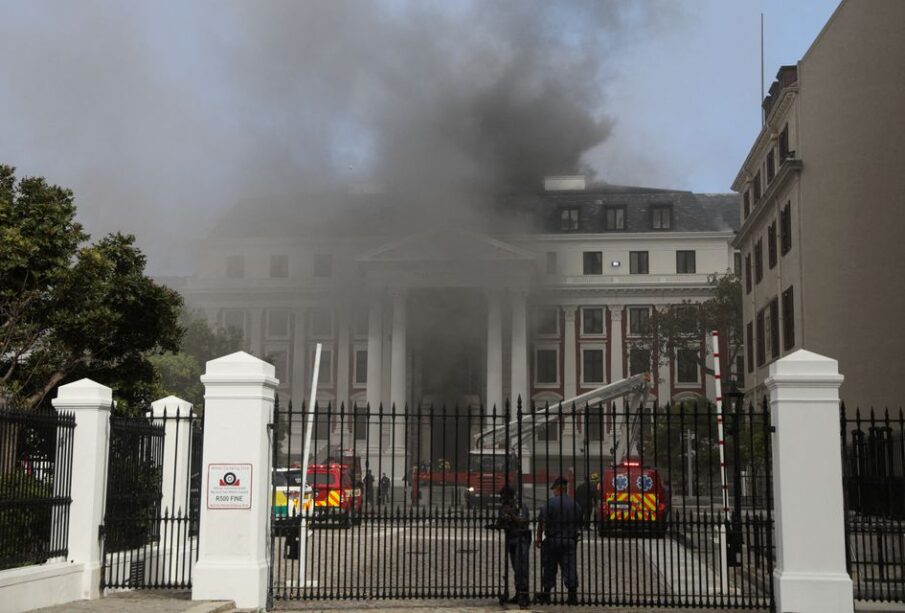 Firefighters work among the smoke after a fire broke out in the Parliament in Cape Town, South Africa. REUTERS/Sumaya Hisham

A blaze erupted at the South African parliament early on Sunday, with flames bursting from the roof of a building and a plume of smoke that could be seen from miles away, and after several hours firefighters had partially contained the fire.

By mid-morning, smoke was still billowing from one of the several buildings that make up the parliament complex in the legislative capital, Cape Town.

“The fire has been contained in the Old Wing. Firefighters are currently trying to control the fire in the New Wing, where the fire has affected the National Assembly Chamber,” parliament said in a statement.

Public Works and Infrastructure Minister Patricia De Lille told reporters there were no reports of any injuries. The cause of the blaze was not yet known.

Jean-Pierre Smith, a Cape Town mayoral committee member responsible for safety and security, told reporters that firefighters had detected cracks on the wall and the roof in one area had collapsed.

Some 60 firefighters and 12 fire-fighting vehicles and pieces of equipment, including a sky lift hydraulic platform, were on site trying to contain the fire, he said.

Thick smoke billowed from the roof of the National Assembly building and from the entrance as emergency services sprayed water inside.

The fire started in an office complex and spread towards a gym just before 6 a.m.