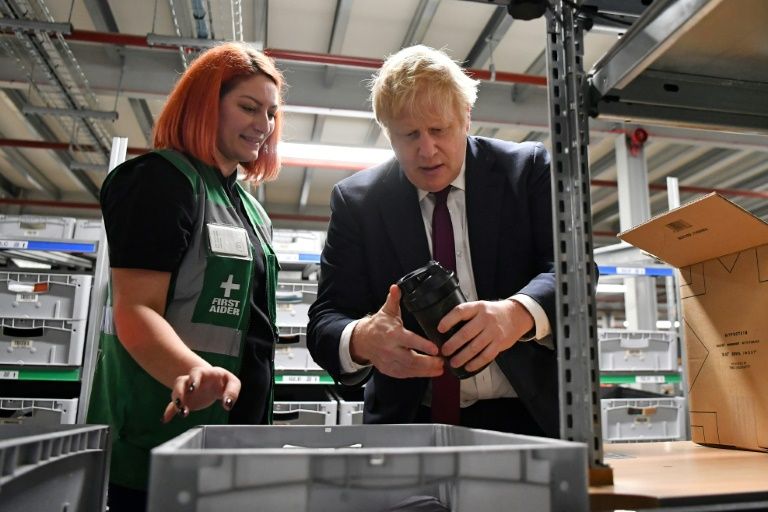 Britain’s political leaders were to criss-cross the country on Wednesday’s final day of general election campaigning as a key poll showed the outcome could be hanging in the balance.

Thursday’s snap general election was called in a bid to break the Brexit deadlock that has gripped Britain ever since the seismic 2016 referendum vote to leave the EU.

After struggling to lead a minority administration, Johnson is hoping to secure a majority government that will enable him to take Britain out of the European Union on January 31.

His centre-right Conservatives have been consistently ahead in the opinion polls but YouGov’s final survey of the campaign predicted they were set only for a narrow majority — with the race tightening.

The pollsters’ seat projection put the Conservatives on course for a relatively slender 28-seat majority in parliament’s 650-member lower House of Commons — down from a comfortable 68 forecast by YouGov on November 27.

The new poll forecast that the Conservatives would take 339 seats (up 22 on the last general election in 2017), with the left-wing Labour main opposition on 231 (down 31).

The Scottish Nationalist Party (SNP) was on course for 41 seats, up six, while the Liberal Democrats are set for 15 seats, up three.

YouGov warned that the final number of Conservative seats could be between 311 — hung parliament territory — and 367.

“The margins are extremely tight and small swings in a small number of seats, perhaps from tactical voting and a continuation of Labour’s recent upward trend, means we can’t currently rule out a hung parliament,” said Chris Curtis, YouGov’s political research manager.

The pollsters interviewed approximately 100,000 panellists over the past seven days.

Johnson, 55, was to start the day delivering milk in Yorkshire, northern England, and end it canvassing in Essex, northeast of London.

“Unless we get out of this quicksand of a Brexit argument, our future as a country remains uncertain… a lost decade of division, delay and deadlock,” he said.

“Let’s get Brexit done and get on with spreading opportunity and hope across the whole UK and let’s unleash the potential of this country.”

In a bid to ram home his core message, Johnson ploughed a British flag-themed digger, marked “Get Brexit done”, through a styrofoam wall with “gridlock” written on it.

Corbyn, 70, was to speak at a rally in Middlesbrough, northeast England, calling Thursday “the most important election in a generation”.

“My message to all those voters who are still undecided is that you can vote for hope,” he was to say.

“We will put money in your pocket because you deserve it. The richest and big business will pay for it.”

The veteran socialist is planning a vast programme of public service spending and nationalisation, plus another referendum on Brexit, pitting a softer version than Johnson’s against staying in the EU.

The Britain Elects poll aggregator puts the Conservatives on 43 percent, Labour on 33 percent, the Liberal Democrats on 13 percent, and the Greens and the Brexit Party on three percent each.

Jo Swinson, leader of the anti-Brexit Lib Dems, was to visit Conservative-held seats on the leafy southwest fringes of London, including Foreign Secretary Dominic Raab’s constituency — tipped by YouGov to be on a knife-edge.

“To stop Brexit, we must stop Boris Johnson. We have one more day left to do it,” she said.

She is seeking a second Scottish independence referendum as the price of supporting Labour in a hung parliament.

Brexit arrangements for the Irish border proved the stickiest part of the EU divorce negotiations.

Chile military plane disappears with 38 aboard