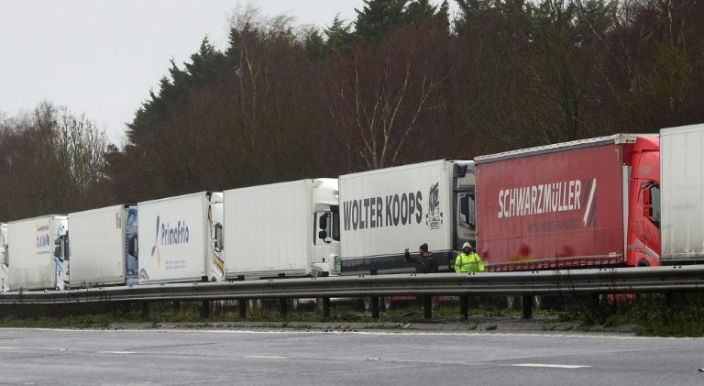 Twenty percent of the UK's daily imports come through Dover and Folkestone. AFP

Britain could face a shortage of fresh produce and greens due to transport chaos at the border as tortuous Brexit talks linger and more countries shut borders after the emergence of a more contagious Covid-19 variant in England.

France on Sunday decided to prevent freight travelling through the key port of Dover, through which 10,000 heavy goods vehicles pass each day.

The decision, initially set to last for 48 hours, caused Britain to bring forward “Operation Stack”, the contingency plan drawn up to deal with anticipated freight tailbacks on roads around Dover in the event of a no deal Brexit.

“Retailers have stocked up on goods ahead of Christmas which should prevent immediate problems. However, any prolonged closure of the French border would be a problem,” said Andrew Opie, director at the British Retail Consortium.

The giant Sainsbury’s supermarkets chain sought to strike a reassuring note, saying: “All products for the Great British Christmas lunch are already in the country and we have plenty of these.”

But it warned that “if nothing changes, we will start to see gaps over the coming days on lettuce, some salad leaves, cauliflowers, broccoli and citrus fruit — all of which are imported from the continent at this time of year.”

James Sibley, head of international affairs at the UK’s Federation of Small Businesses (FSB), said: “This morning we heard evidence which pointed, even in the event of a Brexit deal, to potential food shortages and price rises.”

As the clock ticks down to Brexit, the country has already had a taster: a logjam at seaports has lasted several weeks, disrupting supply chains.

“The closure of France to UK traffic, including accompanied freight poses difficulties for UK capacity to import and export key goods during the busy Christmas period,” Opie said.

“While goods can enter from France, few haulage firms will be willing to send trucks and drivers across to the UK without a guarantee they can return to the EU in a timely manner,” he said.

Only 10 days are left until January 1 when Britain will leave the EU single market and customs union and hopes of securing a new arrangement suffered a blow as another deadline went by with negotiators still unable to reach a deal.

“Yesterday’s suspension of accompanied freight traffic from the UK to France has the potential to cause serious disruption to UK Christmas fresh food supplies – and exports of UK food and drink,” said Ian Wright, CEO of the Food and Drink Federation.

He told the BBC: “6,000 lorries that would have been expected at Dover today or the Eurotunnel. Those lorries won’t be crossing but there’s probably 32,000 lorries coming by all means of transport,” he said.

“The shops are well stocked. In the short term this is not an issue in terms of supply but we are very keen to get it resolved.”

Paul Mummery, a spokesman for the Road Haulage Association (RHA), told Sky News: “We are urging people not to panic buy because the supply chain is resilient.”

“There is plenty of stuff to go around at the moment, there will be plenty of toilet roll, pasta, flour” but added: “If this goes beyond 48 hours it will be more of an issue.”