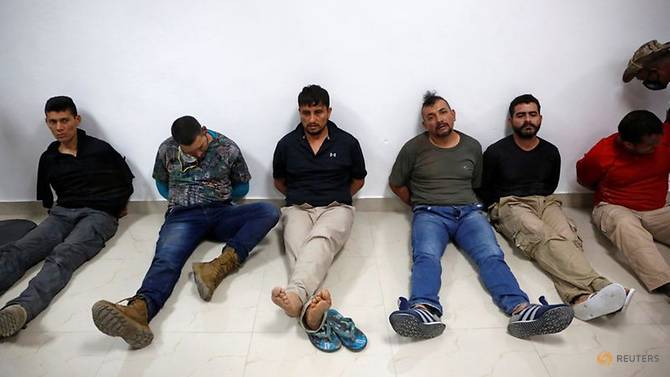 Suspects in the assassination of President Jovenel Moise, who was shot dead at his home, are shown to the media in Port-au-Prince, Haiti on Jul 8, 2021. (Photo: Reuters/Estailove St-Val)

A heavily armed commando unit that assassinated Haitian President Jovenel Moise this week comprised 26 Colombians and two Haitian Americans, authorities said on Thursday (Jul 8), as the hunt went on for the masterminds of the brazen killing.

Moise, 53, was fatally shot early on Wednesday at his home by what officials said was a group of foreign, trained killers, pitching the poorest country in the Americas deeper into turmoil amid political divisions, hunger and widespread gang violence.

“We have arrested 15 Colombians and the two Americans of Haitian origin. Three Colombians have been killed while eight others are on the loose,” national police director general Leon Charles said at a news conference.

On Wednesday police said four of the suspects had been killed. Charles did not explain the discrepancy.

Charles paraded 17 men before journalists at the news conference, showing a number of Colombian passports, plus assault rifles, machetes, walkie-talkies and materials including bolt cutters and hammers.

“Foreigners came to our country to kill the president,” Charles said.

Charles spoke a day after Moise and his wife Martine were attacked by gunmen at their home in the capital Port-au-Prince.

Moise was shot dead in the early morning attack, and his wife was wounded. She has been taken to Miami by air ambulance and authorities have said her condition is stable.

“It was a full, well-equipped commando, with more than six cars and a lot of equipment,” said Haiti’s minister of elections and interparty relations, Mathias Pierre.

Colombian Defense Minister Diego Molano said initial findings indicated that Colombians suspected of taking part in the assassination were retired members of his country’s armed forces, and pledged to support the investigations in Haiti.

A State Department spokesman could not confirm if any US citizens were among those detained, but US authorities were in contact with Haitian officials, including investigators, to discuss how the United States could assist.

Officials in mostly French and Creole-speaking Haiti had said on Wednesday that the assassins appeared to have spoken in English and Spanish.

Charles said in the briefing that authorities had tracked down the suspected assassins to a house near the scene of the crime in Petionville, a northern, hillside suburb of the capital Port-au-Prince.

A fierce firefight lasted late into the night on Wednesday. Officers were heavily patrolling the area from early on Thursday.

“We have the physical authors, now we are looking for the intellectual authors,” Charles said.

Charles vowed the hunt for the other alleged assassins would continue.

“We will strengthen our investigation and search techniques to intercept the other eight mercenaries,” he said.

A crowd of locals gathered on Thursday morning to watch the police operation unfold, with some setting fire to the suspects’ cars and to the house where they had bunkered down. Bullets were strewn in the street.

“Burn them!” shouted some of the hundreds of people who gathered outside the police station where the suspects were being held.

Charles said the local population had helped police track down the suspects but he implored residents in the sprawling seafront city of 1 million people not to take justice into their own hands.

A 15-day state of emergency was declared on Wednesday to help authorities apprehend the killers. But interim Prime Minister Claude Joseph said on Thursday it was time for the economy to reopen and said he had given instructions for the airport to restart operations.

Officials have not given a motive for the killing so far. Since he took office in 2017, Moise had faced mass protests against his rule – first over corruption allegations and his management of the economy, then over his increasing grip on power.

PRESIDENT’S GUARDS TO BE INTERROGATED

The heads of the security detail meant to be protecting Moise the night he was assassinated will be interrogated in the coming days, the head of the public prosector office said Thursday.

“I have given (police) the power to interview all the security agents close to President Jovenel Moise,” said Port-au-Prince government commissioner Bed-Ford Claude.

“If you are responsible for the security of the president, where were you? What did you do to avoid this fate for the president?” Claude said.