Ex-Chad dictator temporarily released from jail due to virus

The Times of Earth, International Edition
0
444 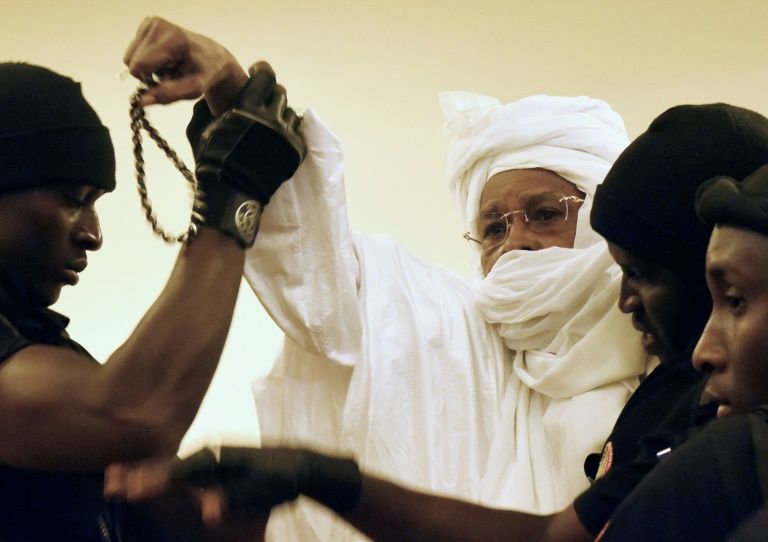 Former Chadian dictator Hissene Habre (C, pictured being escorted to court in 2015) has been granted two months' leave from prison as his jail is being used for new detainees in coronavirus quarantine (AFP Photo/SEYLLOU)

A Senegal judge has granted Chad’s former dictator Hissene Habre two months’ leave from prison, where he is serving life for crimes against humanity, as the jail is being used to hold new detainees in coronavirus quarantine.

Habre, who ruled Chad from 1982 to 1990, was convicted of war crimes and crimes against humanity at an African Union-backed trial in the Senegalese capital Dakar in 2016.

A Chadian commission of inquiry estimated 40,000 people were killed by his regime.

After he was overthrown, Habre fled to Senegal and for more than 20 years lived freely in an upmarket Dakar suburb with his wife and children.-

Dubbed “Africa’s Pinochet”, Habre was finally arrested in 2013 and tried by a special tribunal set up by the African Union under a deal with Senegal.

His trial set a global precedent as the first time a country had prosecuted the former leader of another nation for rights abuses, and was seen as a landmark example of African rights abuses being tried on the continent.

Since his conviction, the ex-leader in his late 70s has been serving his sentence in a penal establishment in Cap Manuel, at the tip of the peninsula where Dakar is located.

His lawyer Mamadou Diawara had requested 60 days’ leave for Habre as, due to his age, he was “particularly vulnerable” to the coronavirus pandemic, according to the judge’s order obtained by AFP on Monday.

Judge Boubacar Ndiaye noted that the Cap Manuel prison has been selected by the Senegalese authorities to hold newly arrested detainees in solitary confinement while they are under quarantine to avoid possible spread of COVID-19 in jail.

He granted a 60-day temporary leave to Habre, to be served at his home in Ouakam, a district of Dakar, and ordered him to return to prison on its expiry.

An association of victims of his regime last week said “the health crisis should not be used as an excuse for the early release of Hissene Habre”.

Senegal has registered 226 confirmed cases of COVID-19 and two deaths.

Spain’s coronavirus deaths up to 13,798 as pace ticks up again