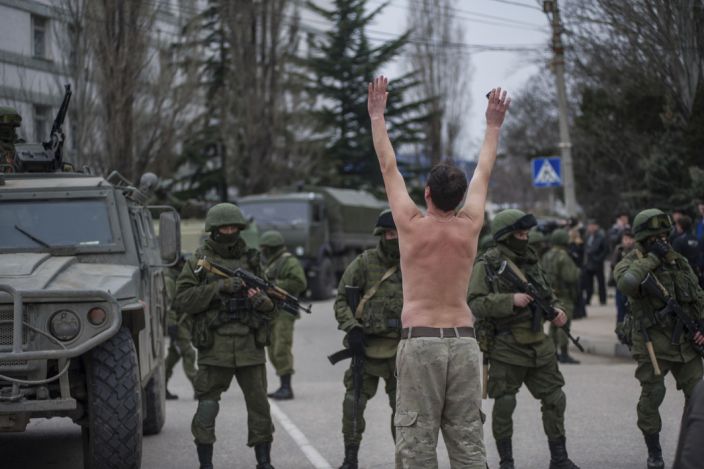 A Ukrainian man stands in protest in front of gunmen in unmarked uniforms as they stand guard in balaklava, on the outskirts of Sevastopol, Crimea. The European Court of Human Rights decided Thursday Jan. 14, 2021, to start considering Ukraine's complaint against alleged human rights violations in the Russia-annexed Crimea. (AP Photo/Andrew Lubimov, File)

The Strasbourg-based European Court of Human Rights, or ECHR, concluded that Ukraine’s case against Russia is backed by sufficient evidence and decided to start looking into the case. It wasn’t clear when the court would deliver a verdict.

Ukraine has argued in its complaint that Russia was responsible for a variety of human rights violations in the Black Sea peninsula. Russia’s 2014 annexation of Crimea hasn’t been recognized by a vast majority of nations and drew U.S. and EU sanctions against Moscow.

International human rights groups long have pointed at numerous rights abuses in Crimea, including restrictions of freedom of expression and peaceful assembly and harassment of pro-Ukraine activists and members of the Crimean Tatar community.

Moscow has charged that it rightfully took over Crimea after an overwhelming majority of local residents voted to secede from Ukraine and join Russia in a referendum. It has continuously rejected accusations of human rights violations in the region.

The ECHR ruled, after examining Ukraine’s complaint, that it provided sufficient evidence of human rights violations in Crimea for the court to consider the case.

The court noted, however, that some of the Ukrainian allegations, including its claim that Russia was responsible for killings and shootings in the region, weren’t properly backed by evidence.

“As to the allegations of an administrative practice of killing and shooting, the Court found that the incidents referred to had not amounted to a pattern of violations,” it said.

Russia’s Justice Ministry quickly issued a statement outpointing that pronouncement by the court.