The Times of Earth, International Edition
0
523 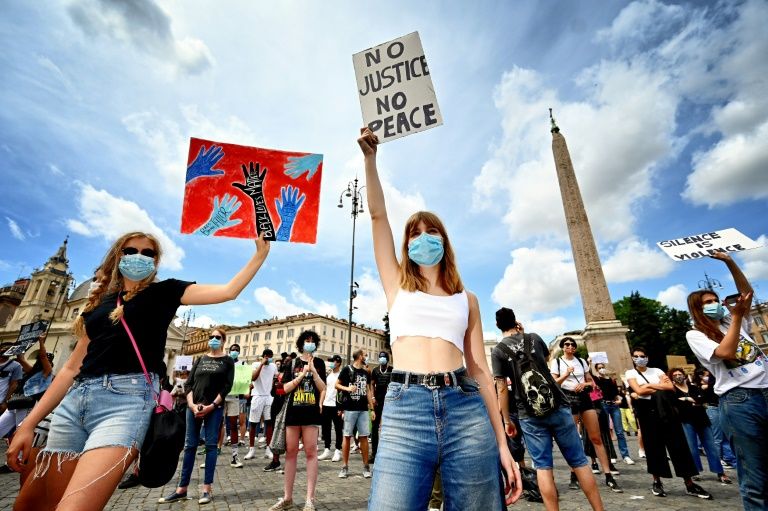 Chanting for justice, protesters rallied in European cities on Sunday, joining a wave of demonstrations sparked by the death of African American George Floyd at the hands of US police.

A video of the incident with Floyd pleading for his life in Minneapolis as a white police officer knelt on his neck has prompted angry rallies worldwide, even as countries continue to discourage large gatherings to curb the coronavirus pandemic.

“Racism knows no borders,” said Leinisa Seemdo, a 26-year-old Spanish translator from Cape Verde. “In all the countries where I have lived, I have experienced discrimination because of the colour of my skin.”

At a police cordon, they knelt in silence in a gesture against racism first made by US football player Colin Kaepernick in 2016.

Rome’s Piazza del Popolo (“People’s Plaza”) also fell silent for eight minutes — around the time Floyd was pinned down by the white policeman — with thousands of people taking a knee in memory of Floyd, their fists in the air.

“We can’t breathe,” shouted the crowd, after the collective silence.

“It’s really hard to live here,” said Senegalese migrant Morikeba Samate, 32, one of the thousands to have arrived in Italy after risking the perilous crossing across the Mediterranean.

Opposition to that wave of migration buoyed the far-right in Italy and elsewhere in Europe, creating a culture of mistrust those in the crowd said needed to end.

Floyd’s death last month has unleashed the most serious civil unrest in America since Martin Luther King was assassinated in 1968.

Tens of thousands of protesters have rallied this week across the country from New York and Washington to San Francisco.

More than 1,000 people also gathered Sunday at a Black Lives Matter protest near the US embassy in Budapest.

Demonstrators held up banners reading “Police everywhere — justice nowhere” and “No Justice — No Peace” and kneeled for eight minutes.

“We have come together to stand up against racism,” Hungarian reggae singer G Ras told cheering protesters. “If we want to live in a better world, we need to radically change the way we live.”

In Spain, rallies were planned in 10 cities from Barcelona and Pamplona to the Canary Islands off the coast of Africa.

Another rally took place in London on Sunday despite a coronavirus ban that aims to prevent large gatherings, following scuffles on Saturday during an otherwise peaceful protest.

In Bristol, a city linked to the slave trade, a statue of trader Edward Colston was taken down and stamped on by demonstrators, BBC images showed.

As countries begin to emerge from lockdowns, governments are struggling to balance people’s need to express anger against the risk of protests spreading cases of the disease that has killed nearly 400,000 worldwide.

Tens of thousands of Australians on Saturday defied Prime Minister Scott Morrison’s call to “find a better way”. More than 23,000 people also demonstrated in France on Saturday, according to the interior ministry.

Floyd’s death came during a pandemic that has disproportionately affected black people and ethnic minorities in global centres such as London, Paris and New York.

The historic economic downturn triggered by the virus lockdowns has also statistically affected the poor and marginalised more.

That combination of economic woes, social tensions and anger at US President Donald Trump’s response, has refocused attention on the world’s racial divides like few other events since the 1960s.