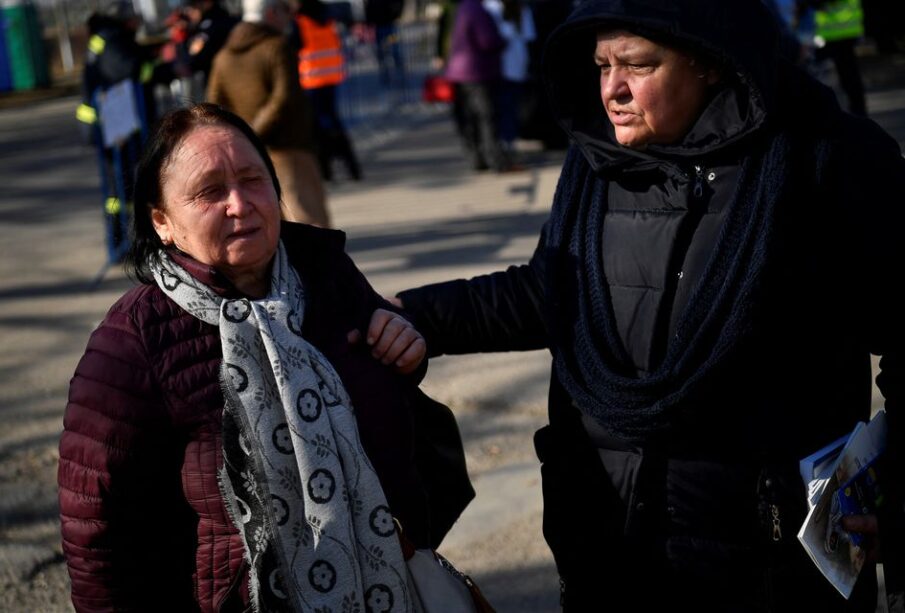 A nun comforts a woman after fleeing from Ukraine to Romania, following Russia's invasion of Ukraine, at the border crossing in Siret, Romania, March 21, 2022. REUTERS/Clodagh Kilcoyne

More than 3.5 million people have fled abroad from the war in Ukraine, United Nations data showed on Tuesday, leaving Eastern Europe scrambling to provide them with care, schools and jobs even as daily numbers crossing borders ease.

The millions who have left Ukraine since Russia’s invasion began have made their way on foot, by rail, bus or car to neighbouring countries such as Poland and Romania before some travel on across Europe. Most, however, have not done so.

While fewer have crossed borders over the past week, the scale of the task of providing homes to those seeking safety in the European Union is becoming increasingly apparent, above all in Eastern and Central Europe.

Poland, home to the biggest Ukrainian Diaspora in the region even before the war, has taken in more than 2.1 million people and while some plan to head elsewhere, the influx has left public services struggling to cope.

“The number of children of refugees from Ukraine in Polish schools is increasing by about 10,000 per day,” Minister of Education Przemyslaw Czarnek told public radio, saying 85,000 children had enrolled in Polish schools.

Czarnek said authorities were organising courses in basic Polish for Ukrainian teachers so they could be employed in local schools and teach preparatory classes for Ukrainian children before entering the school system.

With men of conscription age obliged to remain in Ukraine, the exodus has consisted primarily of women and children, many wanting to stay in countries near Ukraine to be closer to loved ones left behind.

In a video posted on Twitter, Mayor Rafal Trzaskowski said 10,000 Ukrainian students had enrolled in Warsaw schools and that a variety of options, including Ukrainian online classes, were needed to avoid a collapse of the city’s education system.

“We will be flexible, we will act, because we want all those young people who are in Warsaw to be able to study, whichever option they choose,” he said.

More than 500,000 people have fled to Romania, the second most after Poland. Authorities there are trying to accurately size up the task at hand while seeking to recruit Ukrainian teachers from among the refugees.

With refugee numbers nearing breaking point in parts of Eastern Europe, Nicolescu said refugees were returning to Romania in the hope of finding a less difficult situation.

“There are people we have personally put on trains to go to the west who we see back at the train station,” she said.

The needs of those fleeing shelling and missile attacks across war-torn Ukraine, bearing harrowing memories and the pain of separation from family, stretch well beyond education.

The International Organization for Migration (IOM) has organised psychological first aid training near the Polish border with Ukraine to help volunteers provide care for the many struggling mentally.

Paloma Cuchi, the World Health Organization’s representative in Poland, estimated 30,000 of those reaching the country suffered from severe mental problems while half a million needed mental health support due to the conflict.

Barbara Slowinska, a school psychologist, said staff at elementary school number 26 in Gdynia, Poland were working hard to overcome language difficulties and help the 60 children who had arrived from Ukraine integrate.

“We try to talk a lot with the children, as much as we can,” she said, adding that adjusting to new surroundings was the paramount concern.

“They don’t speak about traumatic experiences. We ought to rather calm them down with regard to their current reality in Poland,” Slowinska said.

“That time will come, but that lies ahead. For now they need to come to terms with the reality.”

While border crossings such as Medyka in eastern Poland and Isaccea in northeast Romania have grown less busy, officials are wary that any intensification of the fighting in Ukraine could trigger a new influx.

The head of the U.N. refugee agency (UNHCR), Filippo Grandi, said on Sunday the war had uprooted 10 million people, most of them still displaced within Ukraine rather than abroad.

Russia denies targeting civilians, describing its actions as a “special military operation” to demilitarise and “denazify” Ukraine. Ukraine and Western allies call this a baseless pretext for Russia’s invasion of a democratic country.