Europe steps up support for Ukraine as Russia presses offensive 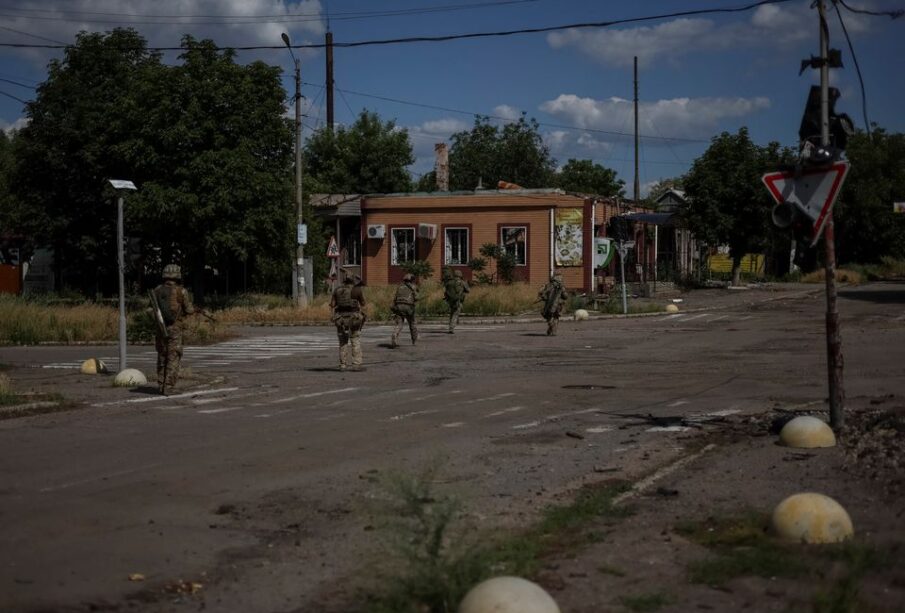 Ukrainian servicemen run along a street, amid Russia's attack on Ukraine, in the town of Marinka, in Donetsk region, Ukraine June 16, 2022. REUTERS/Gleb Garanich

Britain will host talks on rebuilding key infrastructure in Kyiv on Friday, a day after the leaders of Germany, France and Italy visited Ukraine and offered it the hope of EU membership as it battles a ferocious Russian offensive in the east.

After holding talks with President Volodymyr Zelenskiy, the leaders signalled that Ukraine should be granted European Union candidate status, a symbolic gesture that would draw Kyiv closer to the economic bloc.

Scholz said Germany had taken in 800,000 Ukrainian refugees and would continue to support Ukraine as long as it needed.

“Ukraine belongs to the European family,” he said.

Britain will welcome representatives from Ukraine and business leaders on Friday to discuss how British companies can help rebuild key infrastructure in Kyiv.

Britain will promote collaboration between its companies in infrastructure, energy and transport, and Ukrainian public and private organisations to help repair damaged and destroyed infrastructure.

On the battlefield, Ukrainian officials said their troops were holding out against massive Russian bombardment in the eastern city of Sievierodonetsk, and described new progress in a counteroffensive in the south.

But they said battles on both main fronts depended on receiving more aid from the West, especially artillery to counter Russia’s big advantage in firepower.

The visit to Ukraine by the three most powerful EU leaders had taken weeks to organise while they fended off criticism over positions described as too deferential to Russian President Vladimir Putin.

The leaders, who were joined by Romanian President Klaus Iohannis, toured Irpin, devastated soon after the invasion began on Feb. 24.

Noting graffiti on a wall that read “Make Europe, not war”, Macron said: “It’s very moving to see that. This is the right message.”

Putin has repeatedly said the main immediate reason for what he casts as a “special military operation” was to protect Russian-speakers in east Ukraine from persecution and attack.

Scholz, Macron and Draghi all say they are strong supporters of Ukraine who have taken practical steps to reduce Europe’s dependence on Russian energy and find weapons to help Kyiv.

But Ukraine has long criticised Scholz over what it regards as Germany’s slow delivery of weapons and reluctance to sever economic ties with Moscow, and was furious this month at Macron for saying in an interview that Russia must not be “humiliated”.

Italy has also proposed a peace plan which Ukrainians fear could lead to pressure on them to give up territory. After the talks in Kyiv, Macron said some sort of communication channel was still needed with Putin.

In the south, Ukraine says its forces have been making inroads into Kherson province, which Russia occupied early in its invasion. There has been little independent reporting to confirm battlefield positions in the area.

Zelenskiy’s chief of staff, Andriy Yermak, wrote on Twitter that he had visited an area some 3 to 4 km (about 2 miles) from Russian positions, where dozens of “ghost villages” were depopulated by the combat.

“Our guys on the ground – the mood is fighting. Even with limited resources, we are pushing back the enemy. One thing is missing – long-range weapons. In any case, we will throw them out of the south,” he wrote.

The main battle in recent weeks has been over the eastern city of Sievierodonetsk, where Ukrainian forces are holed up in a chemical factory with hundreds of civilians.

“Every day it becomes more and more difficult because the Russians are pulling more and more weapons into the city,” Sievierodonetsk mayor Oleksandr Stryuk said.

The Dutch intelligence service, meanwhile, said it had uncovered an elaborate Russian plot to place a military agent using a false Brazilian identity in the International Criminal Court, which is investigating suspected war crimes.

“This was a long-term, multi-year GRU operation that cost a lot of time, energy and money,” said Dutch intelligence agency chief Erik Akerboom, using the acronym for Russia’s military intelligence service. There was no comment on the case from the Russian government or the ICC.

Ecuador seeks partner to stop gas flaring as anger rises in the ...

Congolese soldier killed in Rwanda, fighting with rebels picks up