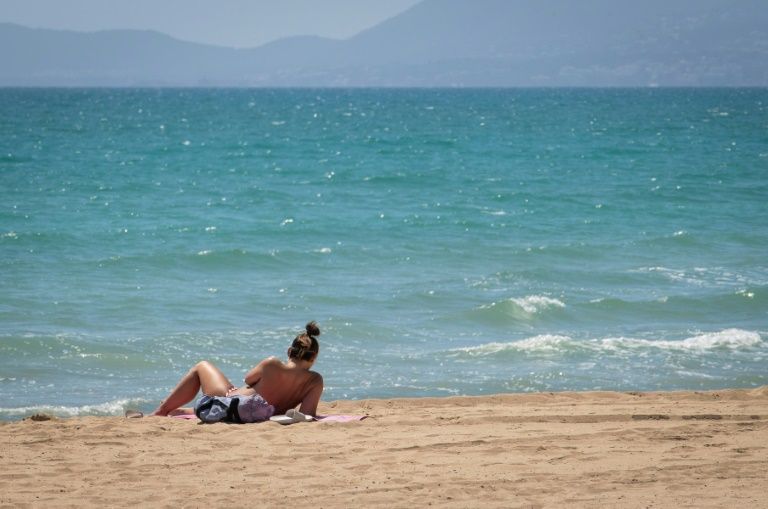 A planeload of German tourists flew to Spain's Mallorca island, taking part in a test of plans to reopen the popular destination as the country emerges from its coronavirus lockdown (AFP Photo/JAIME REINA)

A raft of EU nations reopened their borders to fellow Europeans on Monday after months of coronavirus curbs, but China locked down parts of Beijing to battle a new outbreak that has stoked fears of a second wave of infections.

As caseloads have declined in recent weeks across many parts of Europe, governments have been keen to ease punishing lockdowns that have saved lives but devastated economies and wearied confined populations.

Belgium, France, Germany and Greece were among those lifting border restrictions Monday, while Spain experimented with a pilot project that saw a planeload of German tourists fly into the Balearic islands.

In England, shops and outdoor attractions welcomed their first customers since March, while in Paris, cafes and restaurants were allowed to fully reopen.

“I’m happy to be able to shop again after all this time,” said Precious, an 18-year-old student on London’s crowded Oxford Street.

The pandemic is gathering pace in Latin America, and Iran, India and Saudi Arabia have reported worrying increases in deaths and infections — adding to concern over challenges the world will face in the long fight against COVID-19.

China, where the virus emerged late last year, was the first country to implement extreme restrictions on movement early this year, driving local transmission down to near-zero as the crisis hammered the rest of the world.

The World Health Organization said there were more than 100 new confirmed cases in Beijing where the fresh cluster has been linked to a wholesale food market.

“The origin and extent of the outbreak are being investigated,” WHO chief Tedros Adhanom Ghebreyesus told a virtual press conference.

Streams of people queued in a Beijing stadium as mass testing was carried out, and a strict lockdown was extended across 21 Beijing neighbourhoods.

Almost 433,500 people worldwide have died from COVID-19, nearly halfway through a year in which countless lives have been upended and the global economy ravaged by the crisis.

The United States is by far the hardest-hit country, with more than 115,700 recorded fatalities.

But while some states have seen new flare-ups, President Donald Trump’s administration insists there will be no shutdown of the economy even if a new wave arises.

Global stock markets tumbled again on fears that an upsurge of infections could put the brakes on the easing of lockdowns and dash hopes of dragging economies out of recession.

The United States on Monday also withdrew emergency use authorisations for two antimalarial drugs favoured by Trump to treat the new coronavirus.

Hydroxychloroquine (HCQ) and chloroquine (CQ) were authorised in March after they were found to inactivate the virus in test tubes, and early small studies appeared to show they worked well in humans.

Since then, however, better-controlled experiments have found that the two medicines are ineffective in treating COVID-19 or in preventing infection.

Iran, the Middle East’s worst-hit country, warned it might have to reimpose tough measures to ensure social distancing, after reporting more than 100 deaths for a second straight day.

And the total number of deaths in Saudi Arabia topped 1,000 amid a new spike in infections just weeks before the annual hajj pilgrimage to Islam’s holiest sites.

In India, officials said 15 million people in the city of Chennai and neighbouring districts would go back under lockdown, as cases surged there.

The rise in infections in India — a country of 1.2 billion — has highlighted the precarious state of its healthcare system and in the capital Delhi morgues are overflowing with bodies.

Despite fears over fresh clusters, many countries are making moves towards semi-normality.

The European Union has even launched an app “Re-open EU” — available in 24 languages — to help travellers find out which EU countries they can travel to.

At Brussels Zanatem airport, Joy Kamel, a student travelling to join her father in France, waited to board a flight to Marseille after the transport hub finally reopened.

“It’s been five months since I’ve seen him,” she told AFP. “I’m in the middle of an exam but since I’m taking them online, I might as well take advantage of it.”

In Paris, delighted restaurant and cafe owners were cleared to reopen their dining rooms, three months after the lockdown closed them — finally catching up with the rest of France.

“The question now is whether clients will come back,” Albert Aidan, manager at L’Ami Georges in the heart of Paris, told AFP. “Most companies are still having their employees work from home.”

Across the Channel, thousands of non-essential retailers such as bookshops and electronics outlets in England welcomed their first customers since halting in-store business in late March.

Places of worship also welcomed the faithful back for individual prayer.

Britain, which has the highest virus toll in Europe, is anxious to get back to work after figures last week showed the economy shrank by a fifth in April.

Greece was among those reopening to EU travellers to help revive its devastated tourist industry, but people were wary.

“Everyone’s scared, maybe we’ll catch the coronavirus,” says Orestis Papoulias, manager of a beach bar on the black sand beach of Perissa on the island of Santorini.

Egypt, another tourist hub, said it will open its beach resorts in July, and Peru’s Machu Picchu will also reopen next month, albeit with sharply reduced numbers of visitors.

And in European football, the English Premier League makes its long-awaited comeback this week, days after Spain’s La Liga.