The Times of Earth, International Edition
0
707 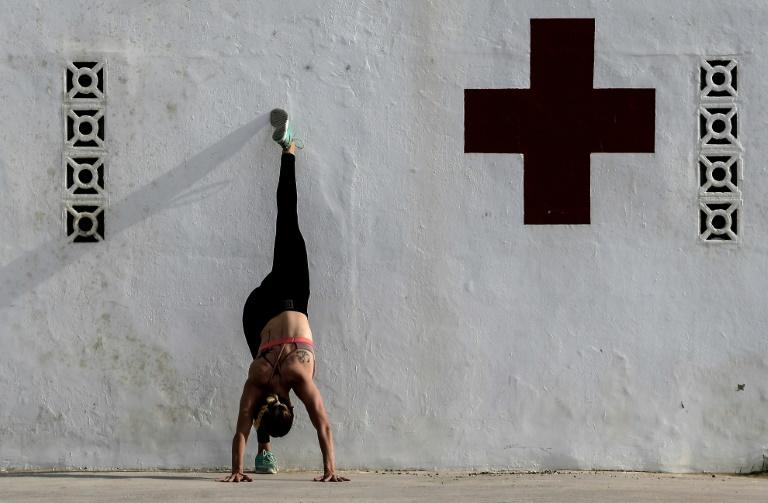 Despite lingering concerns, there was joy and relief in Spain, where people were allowed to exercise and walk freely after the government eased seven weeks of strict lockdown (AFP Photo/JOSE JORDAN)

Europe on Sunday prepared for a further cautious easing of coronavirus restrictions following signs the pandemic may be slowing, with hard-hit Italy set to follow Spain in allowing people outside.

More than 243,000 people have been killed and 3.4 million infected worldwide by the virus, which has left half of humanity under some form of lockdown and pushed the global economy towards its worst downturn since the Great Depression.

With signs that the spread of the contagion has been brought under control, parts of Europe, Asia and the United States have begun to lift restrictions to try to inject life into economies crippled by weeks of closures and ease the pressure from populations wearying of confinement.

After a two-month lockdown in Italy — with the second-highest number of virus deaths in the world — people on Monday will be allowed to stroll in parks and visit relatives. Restaurants can open for takeaway and wholesale stores can resume business, but there was some confusion about the extent of the easing.

“I’m hoping this morning’s paper will clear up some of the many questions about what we can and can’t do,” said Pietro Garlanti, a 53-year-old cleaner, as he queued at a kiosk. “I want to take my old mum to the sea-side, can I?”

Italian authorities have stressed that preventative measures are still needed.

“On the one hand, we’re super excited for the reopening, we’re already organising various activities the kids will be able to do with their grandparents outdoors, workshops in the garden, that sort of thing. The kids can’t wait to see them,” said Marghe Lodoli, who has three children.

“On the other hand, it’s disorientating. The rules are not clear, and we’re not sure if just using common sense will do.”

Elsewhere in Europe, Germany will continue its easing on Monday, while Slovenia, Poland and Hungary will allow public spaces and businesses to partially reopen.

With health experts warning the disease could hit hard once again, governments are sticking to measures to control the spread of the virus and more testing to try to track infections even as they relax curbs on movement.

Face masks will be mandatory on public transport starting Monday in Spain, where people were allowed to go outdoors on Saturday after a 48-day lockdown.

With pressure growing on governments worldwide to balance public health requirements with the need to ease intense economic pain, some nations in Asia announced similar measures.

South Korea — once the second worst-hit nation on the planet — said Sunday it would ease a ban on some gatherings and events as long as they “follow disinfection measures”.

Thailand meanwhile allowed businesses such as restaurants, hair salons and outdoor markets to reopen on Sunday so long as social distancing was maintained and temperature checks carried out.

Despite the reopenings, experts have cautioned that many countries are still not through the worst of their outbreaks yet.

In the latest sign that the pandemic remains a serious threat, the Philippines suspended all flights into and out of the country for a week starting Sunday in a bid to ease the pressure on its congested quarantine facilities.

And to boost morale in what many expect to be a long fight, the armed forces of India — where the world’s biggest lockdown is in force — organised tributes to the nation’s medical workers, including helicopters showering petals on hospitals.

Elsewhere, Iranian President Hassan Rouhani announced that mosques would reopen across large parts of the Islamic Republic, after they were closed in early March to try to contain the Middle East’s deadliest COVID-19 outbreak.

Rouhani warned, however, that while Iran would reopen “calmly and gradually”, it should also prepare for “bad scenarios”.

Across the Pacific, the pressure to ease virus measures is intense on leaders in the United States, where the economy has been hammered with tens of millions left jobless.

The United States has the most coronavirus deaths in the world and President Donald Trump is keen for a turnaround to help reduce the economic pain.

Florida is set to ease its lockdown on Monday, as authorities in other states wrestle with pressure from demonstrators — some armed — who have protested against the lockdowns.

There are signs that the pandemic is slowing down in some parts of the United States.

In New York City, the epicentre of the US outbreak, an emergency field hospital erected in Central Park is set to close, the Christian charity running it said Saturday, as virus cases decline in the city.

But authorities are wary of letting their guard down too fast, with fears the virus could wreak havoc in the most vulnerable communities in the United States.

A massive wave of infections is sweeping through America’s prison population — the world’s largest at 2.3 million — with coronavirus deaths on the rise in jails and penitentiaries across the country.

Riots over inadequate protection and slow responses by authorities have already taken place in prisons in Washington state and Kansas.

“Things are beyond breaking point at this facility,” said Brian Miller, an officer at the Marion prison in Ohio. “Right now it’s hell.”